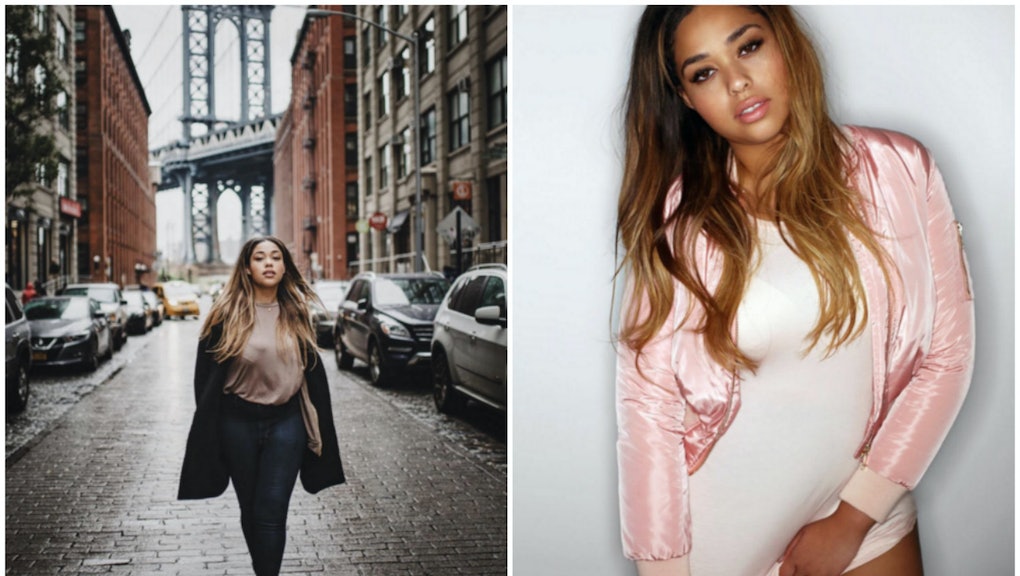 Young Women Are Replacing the Term "Plus-Size" With Something Better

In an interview with Teen Vogue published on Tuesday, 18-year-old model Jordyn Woods, who is described by the magazine as "plus-size," discussed how she plans on changing the industry.

"There's so many people out there just like me, and right now the curve industry is just blowing up because people are realizing curve models are cool, and most people are not that skinny," she said. "I just want to make a change in the curve industry because I want other curve girls to realize that you don't have to dress a certain way because you are curvy." [Emphasis ours.]

Throughout the whole interview, in which the fledgling model was asked all about body positivity and plus-size models, she never utters the words "plus size." Not once.

What she uses instead? "Curve."

Woods is not the only young person swapping out "plus size" for "curve." Just search Tumblr and Instagram for "curve model" and you're faced with thousands of images of young women using the "curvemodel" hashtag proudly. Some are above a size 12 or 14, the retail world's definition of "plus-size," while others appear to be a size 10 or even an 8 or 6.

It's not size that seems to matter; their curves are what unifies them. And the emphasis on shape rather than size could bring more body diversity into the industry than ever before.

"Curve" instead of lame, old-fashioned "plus": "Curve models" and "curve industry" aren't exactly industry-wide terms at this point, but rather are brewing on social media, where the girls outside of the mainstream fashion industry (you know, the ones that read the magazines, go online and shop for clothes) are really into the idea.

Just take a look at the comments on Instagram photos from models like Woods and 18-year-old model Barbie Ferreira, who's known as the "queen of in-between."

"Yours is a body I can identify with," one commenter wrote to Ferreira. "I recognize it so well, I'm a size 12. Thank you for showing the world it's not actually a bad thing but a beautiful thing."

"This is incredible refreshing to see," said another.

For Ferreira, finding fans hasn't been hard, because there are plenty of girls out there who look like she does: shapely, not skinny, but also not overweight to the point of identifying as "plus size."

"The term 'plus size' is so inaccurate,"  she told i-D in a recent video interview. "I'm not plus size, I have never bought an article of clothing that was plus size."

Although Ferreira identifies as curvy, she's not a 12 or 14, the cutoffs traditionally used by retail to separate out "plus" clothing from the rest. That physical distinction, as well as the term itself ("plus" as opposed to normal), has an Other-ing effect and has long cast a stigma on "plus size" that young people are acutely aware of.

It hasn't helped that if you go into the plus-size department at, say, Dillard's or Macy's, you're faced with ugly, frumpy clothing that skews matronly. It's no shock that young people don't relate to the term.

"I think the word 'plus-size' has a negative connotation because for so long... the majority of plus-size clothing is frumpy, matronly and just not cool," Iskra Lawrence, plus-size model and managing editor of Runway Riot, told Mic. "Whereas in current media culture, curves have been classed as sexy because of the media, so thats why I believe people are moving toward the curve term."

Emphasizing shape, not numbers: And yet in the modeling world, "plus size" is pretty much anything beyond the typical runway girl, who is most likely a size 0 or 2 (with few curves to speak of). The modeling industry has long been governed by numerical distinctions, leaving little space for "in-between" models — usually anyone between a size 4 and 12 — or space for models whose weight fluctuates, as most humans' weight does.

As model Leah Kelley told People in August, she entered the industry as a size 8, but knew that to succeed in the industry, she either had to lose inches to fit into the size 2 norm or gain weight in order to be considered a plus-size model.

"I knew losing weight was not an option for my body shape," Kelley told People. "But if I gained weight, I was told I could travel the world – and I did."

But Kelley felt terrible after unhealthily binging for days on end and landed on a size 16. So against the industry's advice, she started exercising again and got back to her size 8 self.

In the past, landing somewhere in between has spelled professional doom for models. But Kelley told People, "My size can fluctuate and change and I am not defined or constrained by a label."

Other models are starting to find the same, including models Myla Dalbesio, who posed for Calvin Klein, and Katie Willcox, who, as Mic reported, asked the question: "Why am I not valued when I look my best and I feel my best?"

New words for a new reality: Yet up until now, there hasn't been a name for these models. That problem, as well as the stigmatizing nature of the "plus" label in shopping, has spurred intense debates online and in the fashion industry, from hashtag campaigns like #DropThePlus and Lane Bryant's #PlusIsEqual to ModCloth's decision to just do away with the category completely.

"Terminology is in the eye of the beholder," Mariah Chase, CEO of plus-size clothing company Eloquii, told Mic. "Personally, I would like to see the industry move towards the democratization of size where demarcation and the accompanying language are based on style, not size."

While some people don't seem to mind the term, deciding to celebrate it, others, like actress Melissa McCarthy, say that the term's "othering" basically tells women that they are "unworthy."

But while the retailers, celebrities and agencies squabble over "plus," the younger generation is seeking a better solution. With "curve," a numerical barriers are replaced by a more qualitative, fluid, shape-based perspective; and a negative distinction becomes a positive one.

"I didn't know curve modeling was a thing, I didn't even think that. I thought it was very rigid standards," Ferreira said to i-D.

It's becoming a thing because women like Ferreira, Woods and their many online followers are making it one.