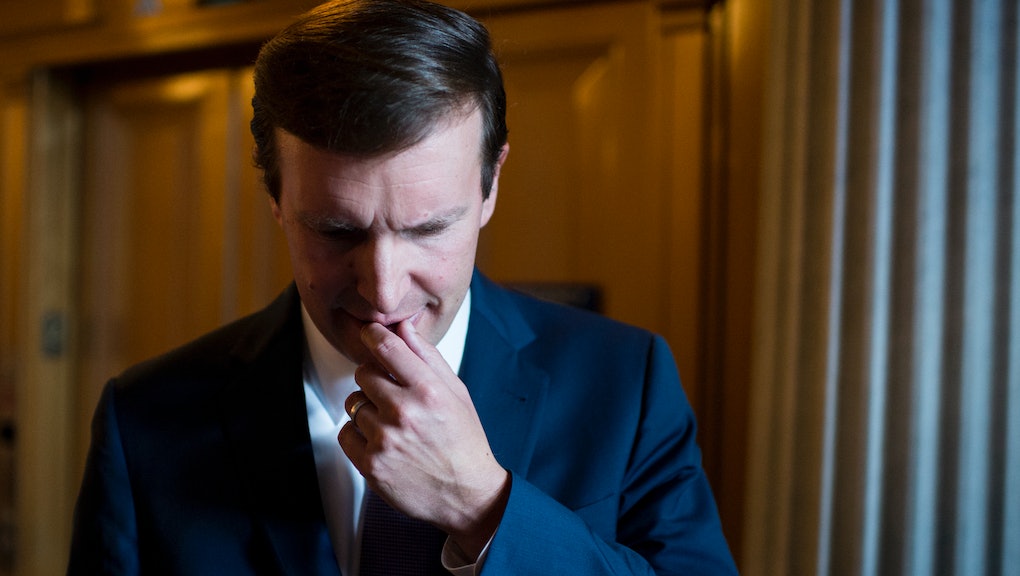 Chris Murphy's Long War: What He Says It Will Take to Tackle Gun Violence

On Dec. 14, 2012, Democrat Chris Murphy was in his final weeks of his term as the congressman from Connecticut's 5th District, preparing to make the transition to the U.S. Senate after winning election to the chamber in November. What transpired that day upended Murphy's last days in the House of Representatives, and reordered the priorities he'd assume as a senator.

At Sandy Hook Elementary School in Newtown, Connecticut — located within Murphy's district — gunman Adam Lanza massacred 20 students and six staff members. The shooting, the second-most lethal ever to take place at an American school, delivered a jolt to the national debate over gun control and led to an ultimately unsuccessful push for expanded background checks.

Since the Senate failed to enact new gun restrictions in 2013, Murphy hasn't let up in his advocacy for tighter gun laws. But the political paralysis on the issue has taken its toll on a senator whose constituents remember all too vividly the horrid events of December 2012.

On Wednesday evening, as the nation reeled after authorities say Syed Rizwan Farook and Tashfeen Malik killed 14 people and injured 21 others in San Bernardino, California, Murphy was at the end of his rope. In a message that's been retweeted more than 22,000 times, he decried the emptiness of lawmakers' "thoughts and prayers" in the absence of policy measures to confront gun violence after massacres like San Bernardino:

Murphy spoke with Mic on Friday morning about his viral message, the steps he says are necessary to combat mass shootings and what he calls the National Rifle Association's stranglehold on the Republican Party. A transcript of our talk, lightly edited for clarity, is below.

Mic: Your tweet on Wednesday clearly struck a chord, and spoke to the frustration many Americans have in how we respond to mass shootings. What was going through your mind as you watched the events in San Bernardino unfold? What sentiments led you to post the tweet?

Chris Murphy: I was angry on Wednesday night.

But frankly I've been angry since December of 2012. I don't understand how Congress refuses to act year after year, mass shooting after mass shooting. It's become apparent to me that these sympathy tweets have become an excuse to do nothing else. I just won't accept that many of my colleagues' responses to these mass shootings begins and ends with an expression of sympathy.

We don't get elected to send out sympathy tweets. We get elected to change laws to make people safer and we're utterly failing at that responsibility. So I'm angry — more than maybe I've ever been before, given the failure of common sense reforms to pass in the Senate this week. I'm not going to shy away from expressing that anger and outrage.

In terms of making policy, we've seen Congress reach a stalemate. Background checks and a measure to prohibit people on the terror watch list from buying guns both failed in the Senate on Thursday. Ideally, though, what measures beyond these would you like to see passed to prevent these tragedies from happening at the rate they are?

CM: I think our inaction has cost in a number of important ways. There's the direct cost of not making policy changes that would have tangible positive effects on safety. But there's also the very dangerous message that we're sending to these would-be killers when we offer no significant condemnation beyond the press releases we send out. I really believe that we have become complicit in these murders because people out there do pay attention to what Congress says and does.

When we do absolutely nothing — and even worse, when we don't even make an attempt to do anything to stop these murders — we're telling young men that are becoming unhinged in their minds and contemplating violence that we're OK with it. So there's a tremendous cost to our inaction.

The policy menu is broad. It spans the gamut from increased background checks to more resources to law enforcement to mental health reform. None of those alone will do the job. But at least we could start to show some momentum if we picked one of those issues and decided to try to find common ground.

In the California shooting, the weapons that were used were legally purchased. But some gun control opponents are arguing in light of San Bernardino that California is one of the states with the toughest gun control laws and that if criminals are hell-bent on committing a gun crime, they'll find a way to do it. What's your response?

CM: I find ridiculous this game in which any law is rendered invalid because it doesn't solve every single mass shooting in one fell swoop.

The fact is every single mass shooting has a different set of facts and no one law is going to have the effect of preventing every single one of these episodes. But there are some common threads between Newtown and San Bernardino. The initial reports are that there were military-style assault weapons used in this shooting with high-capacity magazines attached to them.

California's laws are virtually meaningless if Nevada allows you to buy weapons that are banned in California. So that's why gun trafficking is a national problem that needs a national solution.

I want to take you back to the aftermath of the Sandy Hook shooting. A few months later, we saw Congress fail to agree on some basic reforms to the nation's gun laws. Some people have argued since then that if the slaughter of these young children couldn't prompt any meaningful policy response, there's nothing that will. Are we too far gone as a country, or are you more optimistic?

CM: I have to be optimistic in order to pick myself up out of bed every day and go to work. If you don't believe that things should change, you should probably submit your resignation.

I clearly, over and over again, underestimate the power of the gun lobby within the Republican Party, and Thursday was a reminder to me that we've got to build up a political infrastructure around gun violence that ultimately can beat the NRA. That's not a project that lasts months. That's going to take years and years.

CM: I guess one way to make sure that there's never again a shooting at a Planned Parenthood is to shut down Planned Parenthood. So maybe the Republicans have found a creative way to address gun violence. But to most of us, the idea that you would attack Planned Parenthood literally within hours of mass murder occurring on their premises is outrageous.

But there's going to be a price to be paid electorally for these votes. I don't know how vulnerable Republicans up for election in 2016 are going to explain that they voted to allow terrorists to buy guns. And in states like New Hampshire, Pennsylvania and Ohio, there's not going to be a lot of swing voters who are interested in an all-out attack on women's reproductive health.

Ultimately, the voters are in charge, and there are going to be electoral consequences for the votes cast on Thursday afternoon.

Polls show overwhelming support for measures like background checks. But there is a motivation gap here: People who are opposed to new forms of gun control are much more likely to be single-issue voters on this issue. How do you address that gap?

CM: I would turn that back around to talk about what the NRA has done. The NRA is successful not solely because they're speaking to single-issue pro-gun voters, but because their endorsement has become a proxy for candidates to show conservative bona fides.

So the NRA endorsement is a signal to voters, especially Republican voters, that you're a true conservative. If we really want to be creative and start thinking about new tactics, then it's worthwhile to think about other ways in which Republicans can communicate their conservative credentials — or trying to discredit the NRA as a proxy for the entire conservative movement.

I would never counsel somebody to become a single-issue voter, not even on the issues I care about, so I'm not sure that that's ultimately the right tack for our movement to take, but I think we can try to devalue the NRA endorsement.

Speaking with Vox on Thursday, you said that Congress is "bought and paid for by the gun lobby." So do you think you have colleagues who would otherwise support new gun laws, but for the endorsements and contributions they receive from groups like the NRA?

CM: How else can you explain the vote on banning guns to terrorists other than the fact that the NRA opposed it?

I think a poll would tell you that 99.9% of Americans support withholding guns from people on the terrorist watch list. So there's no way to explain 54 Republicans voting against the bill other than the power the NRA.

Now, it's not just the NRA contributions. It's the reach of their list, and the idea that their endorsement has become a seal of approval for a broader conservative message, but yes: I think the NRA largely owns the House and the Senate right now. If they didn't, then people on the terrorist watch list would be on their way to being disqualified from owning a gun.