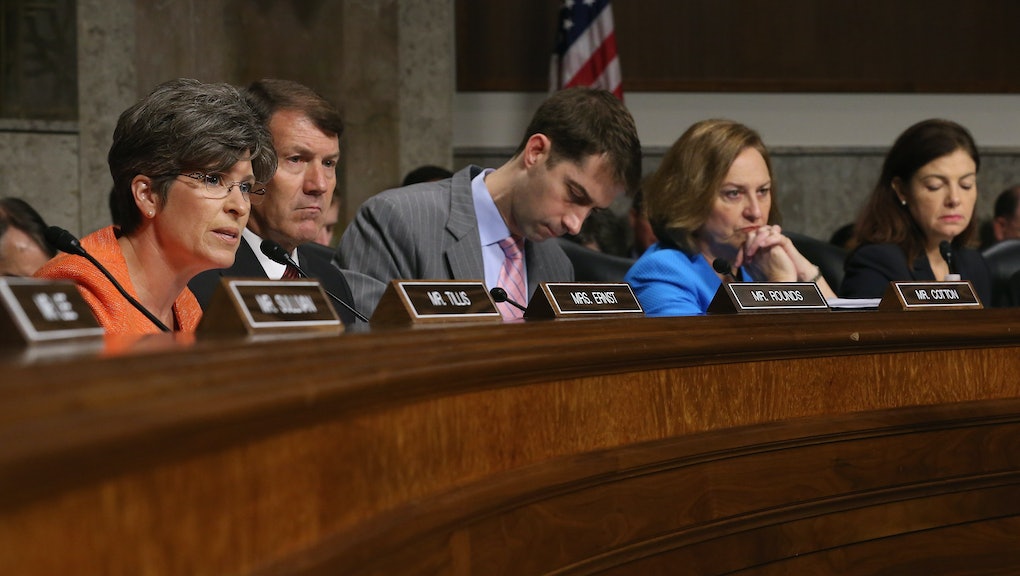 On Thursday evening, the Senate voted down two gun control proposals introduced by Democrats as legislative response to multiple mass shootings across the United States this week. The measures, put forward as amendments to an Obamacare repeal package, would have banned the purchase of firearms by individuals on the FBI's Terrorist Screening Database and expanded background checks for firearm purchases to include weapons purchased at gun shows and online.

On its surface, the proposals' failure is the latest installment of the political stalemate between Democrats, who favor expansion of gun control legislation, and Republicans, who support the expansion of the Second Amendment's right to bear arms. But beyond the stated philosophical differences between the parties — the votes fell almost entirely along party lines — the staunch opposition to the measures also highlight an important component of the battle over firearms in Congress: the influence of the National Rifle Association, particularly when it comes to financial support of candidates and their campaigns.

According to a Mic analysis of political spending data collected by the Center for Responsive Politics, the NRA, —often cited as the most influential lobbying organization in the country — has spent a total of $27,205,245 in support of the 50 senators who voted against background check expansion on Thursday. That amount includes direct donations to their campaign committees, outside spending in support of the candidate — that is, political expenditures made independently of candidates' committees — and outside spending against their opponents, spread across their entire political careers.

Nine senators have received more than $1 million in total support — many during the 2014 midterm election cycle:

Hot as a three-dollar pistol: Over the course of their careers in public office dating back to 1989, the 49 Republicans and lone Democrat who voted against the expansion of background checks have received $1,114,304 in direct donations, at an average of $22,286 each. (The one Democrat to vote against the measure, Sen. Heidi Heitkamp of South Dakota, has never received support from the NRA.) Some Republicans have fared better than others in direct donations: Sen. Rand Paul (R-Ky.), a current presidential hopeful, has received no money in direct donations from the NRA, while Sen. Richard Shelby (R-Al.) has received $85,400 in direct support. Shelby's voting record in support of the group and its policy objectives has been, in the words of its policy arm, "unwavering."

But the majority of the money spent in support of senators who voted against universal background checks — a measure supported by 92% of Americans and 74% of rank-and-file NRA members — was spent against their opponents. If the enemy of one's enemy is one's friend, then the NRA may count a sizable portion of the Senate among its closest allies: The NRA has spent $14,240,194 in outside expenditures to knock out the opponents of those who voted down the background check expansion. Of the 50 senators who voted against universal background checks, 14 were indirect beneficiaries of that money.

Money talks: The NRA is staunchly opposed to virtually every form of gun regulation: national databases of gun purchases, the gathering of statistics on gun-related deaths, so-called "assault weapons" bans, mandatory waiting periods and, most recently demonstrated, the implementation of universal background checks for those who wish to purchase a firearm. If recent legislative history is any indication, it appears to be succeeding.

The failure of the amendments seeking to universalize the background checking system currently in place in gun shops across the nation was only the latest victory secured in part by the NRA's war chest. After a 20-year-old man killed 20 elementary school children, six adult staff members, his mother and himself in Newtown, Connecticut, in 2012, the NRA combated the resultant furor over background check loopholes head-on.

A week after the shooting, NRA executive vice president Wayne LaPierre famously declared that "the only thing that stops a bad guy with a gun is a good guy with a gun," and vowed to fight legislation aimed at restricting access to firearms or munitions. Legislation introduced soon after in Congress — the Assault Weapons Ban of 2013 and the Manchin-Toomey Amendment, a previous version of the amendment that failed on Thursday — were both defeated on April 17, 2013.

According to Shooting Tracker, there have been 979 mass shootings in the United States since that date.