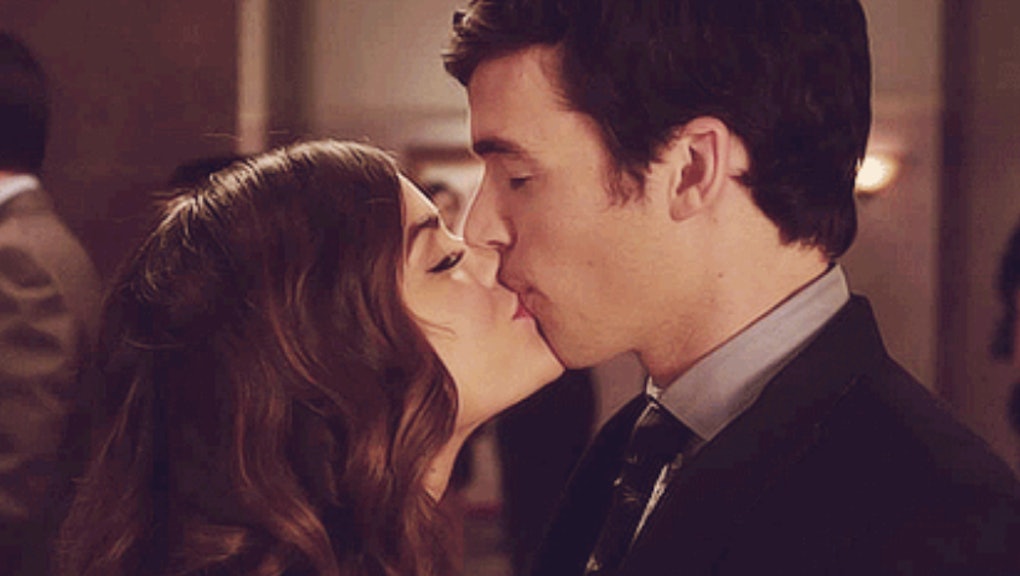 Yet another set-up episode passes by this week, Pretty Little Liars fans. Though there are a few revelations and big moments in Tuesday night's episode, "Along Comes Mary," viewers were left waiting with bated breath to finally get to the the action.

The previous week's episode left fans wondering where Caleb went after his fight with Spencer. Ali reentered Welby to protect their cover after murdering Elliott, while the girls found his burner phone — thanks to Jenna Marshall calling someone named "Archer."

Jenna was calling Archer Dunhill, the real name of the British poser and probable Uber A mastermind "Dr. Elliott Rollins." Aria and Emily attempt to set a trap for Jenna — or whomever Archer's accomplice is — and discover that not only does he have a burner phone, he has a whole burner apartment. While searching the pig-sty of an apartment for clues, they discover that Archer was regularly paying two parties with the monikers 'MD' and 'JD' — Mary Drake and Jenna Marshall, perhaps? — and he was playing a pretty convincing Detective Wilden.

While going through his documents, they're trapped by someone trying to enter the apartment. Uh-oh: It's the police. Uh-oh part deux: It's Toby. He lets them go, but when the police inevitably dust the place, it's hard to imagine they won't find dirty little fingerprints all over the apartment. You'd think that after six years of these shenanigans, the Liars would invest in some gloves.

The police were only a few steps behind the girls on locating the apartment, but are miles ahead in terms of reveals for the next episode. Though the Liars left a trail leading to Philly, and though they buried his bloody and battered body in a remote location in the woods, cops track Archer's credit card and actually spot him in Baltimore.

In another déjà vu moment of Liars kissing cops, Spencer realizes that the "random" guy she hooked up with in the Radley Hotel elevator is none other than Toby's new boss and head of the Rollins investigation. She pretends they don't know each other, which is either because she's in the middle of asking "Toby-Wan Kenobi" where Caleb is, or because we finally see their height disparity. Awkward.

Ali is free of Welby, but she's broke and having to host Mary Drake. Due to the terms of her release state, she must be with next of kin. Though he didn't want Ali dead, Archer did clean out her bank accounts, savings, etc., and seemingly cheated Mary Drake out of her payment for helping with Ali. The estranged aunt and niece have an "honest" conversation when she first arrives (Ali offers and then withholds a glass of water, power move) where Mary admits she played her part in committing Ali, but was not on board when "things got murdery."

So then Mary tries to bond with Ali over getting screwed over by men. Is she is still a villain? To be determined. Meanwhile, definite villains Jenna and Sarah Harvey team up and bond over their handicaps and hating the Liar gang, and joined at the very end of the episode by creepy but hunky Noel Kahn.

Miss you? No. Forgot you existed. But very glad for the eye candy.

Now, the big news: Much to the delight of #Ezria fans everywhere, Ezra proposed.

Ezra is totally committed to Aria once again, and even visited Nicole's (his dead ex-girlfriend) parents to tell them about him and Aria. What he doesn't know, though, is that he may have jumped the gun in moving on. Aria answers Ezra's phone while he's out running errands, and is more than shocked to see that it's Nicole's number calling.

When she consults Emily, she is told a similar story of a cousin accidentally using her dead dad's phone, and is convinced to delete the call. Think Ezra would have proposed if he'd seen that? Notably, Aria doesn't say "yes" to the proposal in this episode.

Caleb is still missing and Hanna helps Spencer try to find him, which is boring, because we all want Caleb and Hanna to get back together. #HalebForever

Emily has a date with, and then finally kisses, Sabrina the barista. Nothing else to report there, except that Ali is kinda jealous, and their PG slumber party causes Emily to miss her super important college exam. Uber A fakes a 91% for her though, sending along the note, "Thank me later, you ungrateful bitch."

Episode six won't air until August 2 — which means fans will have to wait two weeks for new developments. The most pressing question of all: Will Aria take Ezra up on his proposal?