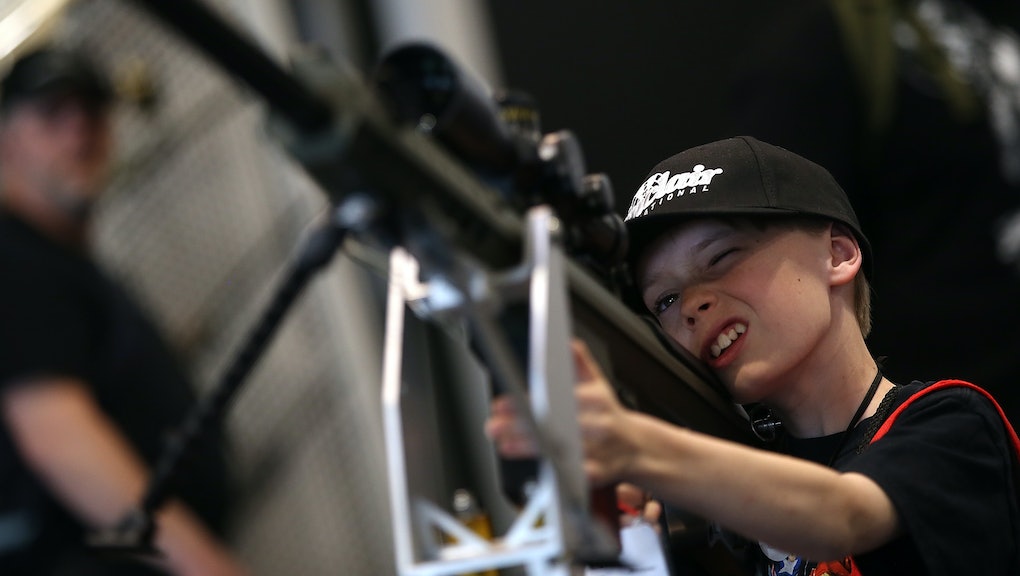 Millennials Around the World React to America's Gun Violence Problem

In the wake of yet another mass-shooting, this time in San Bernardino, California, the world was left aghast, mind-boggled at the cyclical and persistent nature of gun violence in the U.S. Many millennials across the globe find this particular facet of American culture impossible to comprehend — particularly when the answer is seemingly so simple.

Mic sat down with nine millennials, from Pakistan to Norway, from Mexico to Yemen, to discuss their take on the United States' relationships with guns and how the problem can be solved.

"There need to be strict gun laws: The government needs to stop facilitating these crimes. Even if a criminal wants to commit a crime, the government should make it hard for them, they shouldn't put guns in their hands."

"Dec. 25 [Editor's note: The attack occurred Dec. 16.] was the worst example for us," Virk said of the 2014 Taliban-led school massacre in Peshawar, Pakistan, which left a total of 141 dead. "Gunmen in Peshawar went and shot 132 children in the head. So, we Pakistanis share the pain of gun violence ... We have suffered at the hands of the terrorists who have used guns and bombs. We share the same pain the world felt after Paris."

"I can't believe a country like the U.S. still allows them — they preach to the rest of the world about peace, but then they let anyone have a gun ... The problem for me, logically speaking, is the conservatives are going to use this Muslim thing to fight for even less gun control. They're arguing it's necessary for self-defense."

"The other day, in my French class, one of my classmates made an exposé on gun control. She showed us a video on how gun culture is so dominant in American culture, with images of young children holding guns ... I couldn't help but remember the ISIS propaganda videos. Maybe it's not the same intentions, but really how much different is it? It's kids learning how to use guns and teaching them violence."

"This is why guns need to be regulated."

"I think the problem is that San Bernardino wasn't a surprise ... I'm sure there are complexities I don't understand, but surely people recognize how awful this is, that someone's got to stop the guns."

"Another thing you get is this outpouring of these thoughts and prayers, but they [politicians] are not doing anything about it. The amount the gun lobbyists spend in America — it's insane. They're essentially funding large swaths of the government. But the NRA [National Rifle Association] is only as powerful as the people who believe in it, and that belief seems to be able to be bought. It's not going to make you less American if you don't support the Second Amendment."

"I just see it [the shooting] and I think, 'You know what? I'm really glad I'm not raising my kids in America,' because I send Krishna off to nursery everyday and I'm not worried about someone going in toting a gun and killing all the children — and I think of that awful incident in the [Sandy Hook] primary school."

Sucindran and his family fled Sri Lanka when he was 2 years old due to the escalating civil war at the time:

"We went there about 18 years after we left and we returned to my parents' house — that love built — and there were bullet holes in the walls and shells on the porch. I mean, that's war. That's enemy combat. That's the kind of situation where you actually could do with an assault rifle at home ... And if that's what you want, shells in your back garden, that's what you'll get. Violence begets more violence."

"Someone needs to wake up and say, 'Yeah, the gun lobby does give us a lot of money, but are we sacrificing something so much bigger?'"

"Countries that have the biggest security issues are the ones with the fewest gun laws. A lot of times I find it baffling that Americans have the same mentality towards guns as Yemenis. There must be a solution. Just dealing with the status quo is not a solution."

"One of the biggest problems I have with this is the media reiterating the fact that they [alleged shooters Tashfeen Malik and Syed Farook] were from a 'moderate Muslim' family. It creates further fear towards Muslims. Now they [pro-gun Americans] want more guns because now they think your neighbor, who was previously cool or 'moderate,' is going to shoot at you. Whether it's Islamic terrorism or black folks, all this is fear-mongering."

"I've stopped being surprised. Now I'm just angry, I was sad at first, but now it's anger — because it's preventable."

"I hope that this time it will be different, but we already saw Obama being upset and angry and we saw all the Republicans hoping and praying, as they do every time. I wonder what it will take, how big a tragedy, before something is done. When Newtown [Connecticut] didn't change anything, I kind of lost my optimism."

"We don't have anything like the NRA anywhere else in the world, so maybe the amount of money in politics... Obviously, there is a connection."

"In other places there's a common, social project. In Canada [Amigo's current place of residence], there's a long social democratic history of people working together. In the U.S. it's atomized and become very individualistic.

"As the wealth inequality gap increases more people are angry about their means to succeed and people find scapegoats. That scapegoat could be Planned Parenthood, but they're symptoms of deep socioeconomic frustrations."

"I would simply remind Mic readers that in other places, people don't have to manufacture fears in their daily lives. You go to societies that function very well, other places that have a very high standard of living and violence and protecting each other from threats is not part of the cultural narrative."

"I would encourage people to question how they buy into this narrative of fear, whether it's the films they watch or the things coming out of politicians' mouths."

Housseïn, a Libyan refugee in his 20s living in Paris

"It was a shock to people everywhere, to people around the world."

"It's much different than the gun culture in France. I don't know much about the gun culture in America, but I know it's complicated there, it's not like here. There's a lot of racism in the United States, more than there is here, I believe."

"Violence via video games and the media has been occupying our minds. People need to retreat or make retreat part of American culture in order to detoxify, clear, purify their mind and spirit."

"The origin of violence — beyond the gun — it is the outcome of the decline of our education system, [the rise of] individualism and the decline of American Postmodernism."

"As someone whose family members (on both sides of the border) are hunters and military members, and as someone who is deeply concerned for her kids' safety, and as someone who can remember being a young Canadian learning about the Montreal Massacre (which set Canada on the path to significant long-term reform of its gun laws), and as someone who admires the strong and fearless Americans who fight gun violence, I have a pretty extensive perspective on how common sense reforms will save this nation from further bloodshed."

"My first reaction on why I fight gun violence is always the same: because I love my American family and friends who don't have to live this way. Although my Canadian relatives and friends are simply mystified by the extent of gun violence here, I always insist: this problem is going to be fixed by the biggest, bad-assest Americans you ever did see. Just watch."