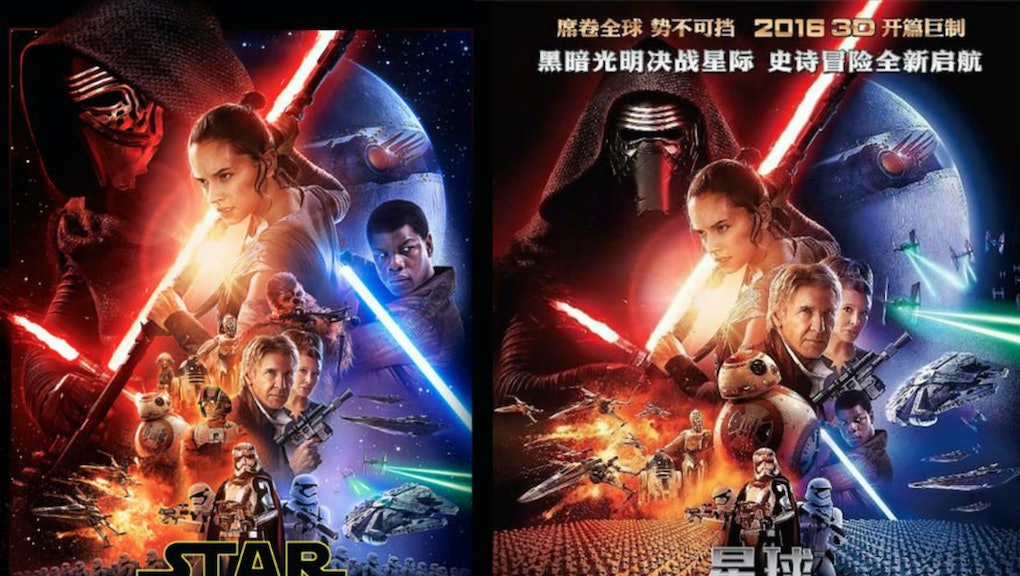 Can You Spot the Problem With These Chinese 'Star Wars' Posters?

Anticipation for the latest Star Wars sequel, set to open Dec. 18, is at a fever pitch. The sequel combines classic characters — Han Solo, Chewbacca, Princess Leia — and a new cast of characters to fall in love with.

But in China, you won't see one of the film's main characters prominently on the main poster: Finn, played by John Boyega.

In the original movie poster, Finn is the third-largest character, dwarfed only by Adam Driver as Kylo Ren and Daisy Ridley as Rey. However, in the movie poster circulating in China, Boyega's Finn is moved in size and location: he is below Han Solo, Princess Leia and a much-larger BB8.

Interestingly, the demotion of Boyega's Finn is not the only difference — and not the only one concerning characters of color, either. In the Chinese version, Guatemalan actor Oscar Isaac, beneath Solo and Leia in the American poster, is missing completely. Alien pirate Maz Kanata, played by Academy award-winner Lupita Nyong'o, is also missing.

People on Twitter have already spoken up about their feelings.

This is not the first time that a prominent black character has been diminished in importance for a foreign audience. In 2013, Italian movie posters for 12 Years a Slave emphasized the minimal role of international movie star Brad Pitt over the face of central character Solomon Northrup, played by Chiwetel Ejiofor.

This is not the first time that Boyega's character has been the center of controversy. Fans expressed anger and frustration at Boyega's casting as a stormtrooper, given that the original stormtroopers were all clones of the very-not-black Jango Fett. Boyega responded to the controversy on Instagram in a post that has since been deleted.