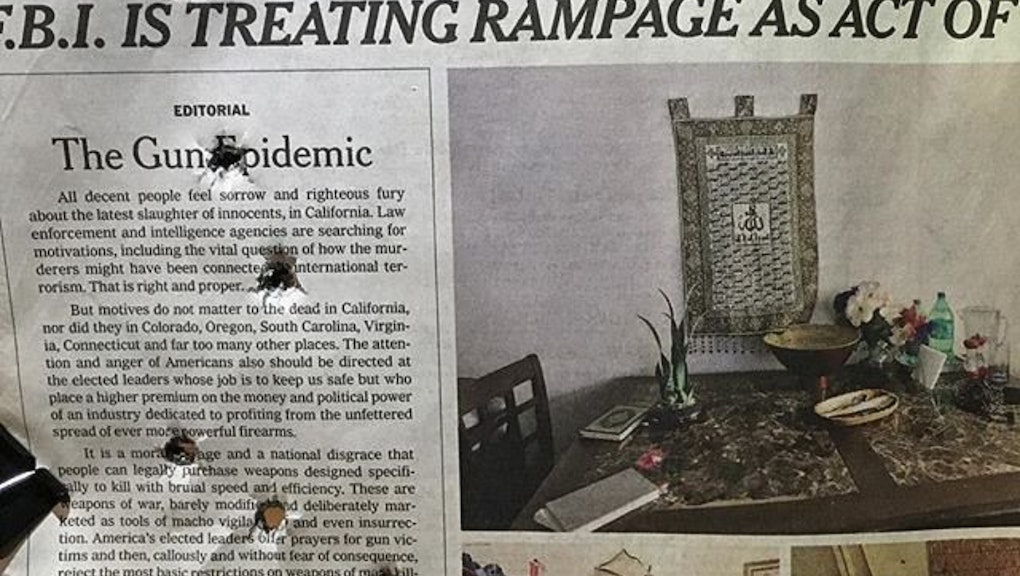 On Friday, the New York Times posted its first front-page editorial in nearly a century, demanding the nation take concrete action against gun violence in the wake of yet another rampage killing in San Bernardino, California, this week that killed at least 14 people and wounded 21 others.

The Times called U.S. gun laws a "moral outrage and national disgrace," saying the public should be furious at "elected leaders whose job is to keep us safe but who place a higher premium on the money and political power of an industry dedicated to profiting from the unfettered spread of ever more powerful firearms."

The paper said while opponents of gun control often claim laws wouldn't stop the massacres and point to mass murderers in "France, England and Norway" who were able to obtain illegal weaponry, "at least those countries are trying. The United States is not ... It is past time to stop talking about halting the spread of firearms, and instead to reduce their number drastically — eliminating some large categories of weapons and ammunition."

While the Times' editorial is the clearest the paper has ever been about the need for national action on gun control, prominent gun rights advocate and influential conservative activist Erick Erickson was less than impressed.

He took a firearm and shot the paper, which explicitly denounced the "macho vigilantism and even insurrection" of the gun industry and asked the nation retain its "sense of decency," full of holes.

Erickson then posted an image of the results to Twitter.

Erickson gloated about the "liberal reaction" his message attained as he earned both praise and mockery from other social media users.

Erickson is a figurehead in a movement where many members quite literally believe they may need firearms to defend themselves against tyrannical politicians and the government. Erickson himself has written at length about the need for a heavily armed population to defend their rights.

So it seems his post was also a thinly veiled threat that proponents of gun control are going to get a lot more than they bargained for if they try to take anyone's guns. That Erickson feels comfortable sending that message is less a reflection on him personally but a reminder of just how much the gun-rights movement is infused with a troubling machismo. It's also a reminder that much of it is not very interested in compromising.