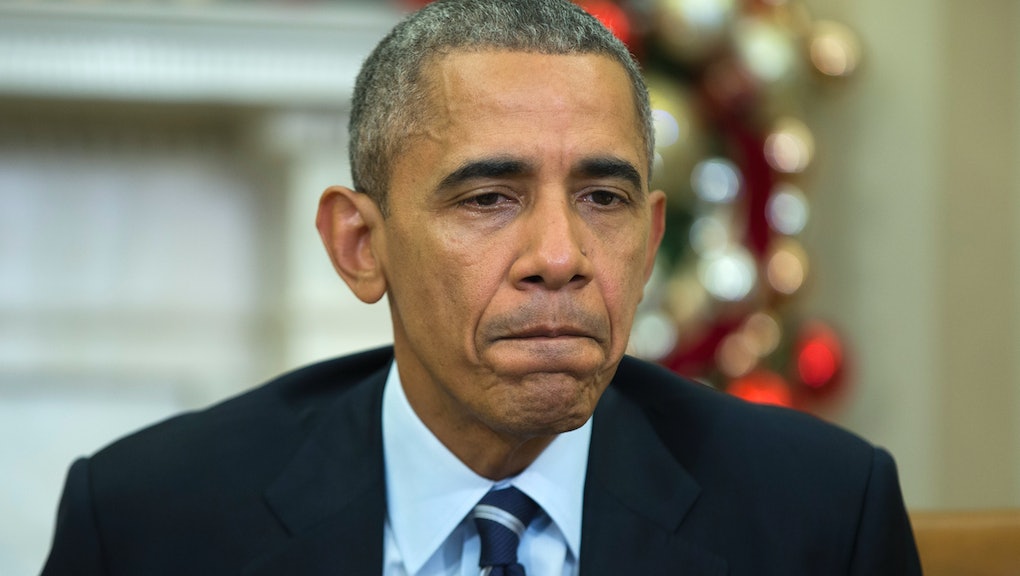 Tonight at 8 p.m. Eastern, President Barack Obama will make a rare Oval Office address on the topic of terrorism. You can live stream the action via the CBS News player on Mic.com's homepage. The address comes on the heels of the recent mass shooting in San Bernardino, California.

Two armed assailants, Syed Rizwan Farook and Tashfeen Malik, opened fire on Wednesday at the Inland Regional Center. The incident left 14 dead and 21 injured, and again brought into focus the debate on the availability of guns. Reports emerged Thursday that Malik had pledged allegiance to ISIS leader Abu Bakr al-Baghdadi, which brought into focus the rising threat of terror with the Paris terror attacks still fresh in everyone's mind.

According to the Associated Press' Julie Pace, Obama is reportedly going to urge the American people not to give into the fear or terror and will attempt to assure the country that everything that can be done to keep the country safe from terrorism is being done.

The San Bernardino shooting is the largest mass shooting since the 2012 Sandy Hook Elementary shooting, which resulted in the deaths of 20 students and six teachers. It also marks the United States' 355th mass shooting in 2015. It is not expected, according to the AP, that the president will announce or request any sort of policy changes.

However, the shooting has furthered the battle between Republicans and Democrats on the issue of gun control in the United States. On Thursday, the U.S. Senate shot down a bill that would have required stricter background checks for those looking to buy a gun. It would have also prohibited sale of a gun to anyone on the terror watch list in the U.S. The vote against the bill, which was helped in large part by the near unanimous opposition of House Republicans, has been heavily criticized by Democrats such as Chris Murphy.

Florida Sen. Marco Rubio said on Sunday's "CBS This Morning" that background checks were not the reason the shootings happen, nor the solution to preventing more mass shootings. "None of these crimes that have been committed — or what I believe is a terror attack in California — would have been prevented by the expanded background checks," he said. "The fact of the matter is these individuals would have passed."