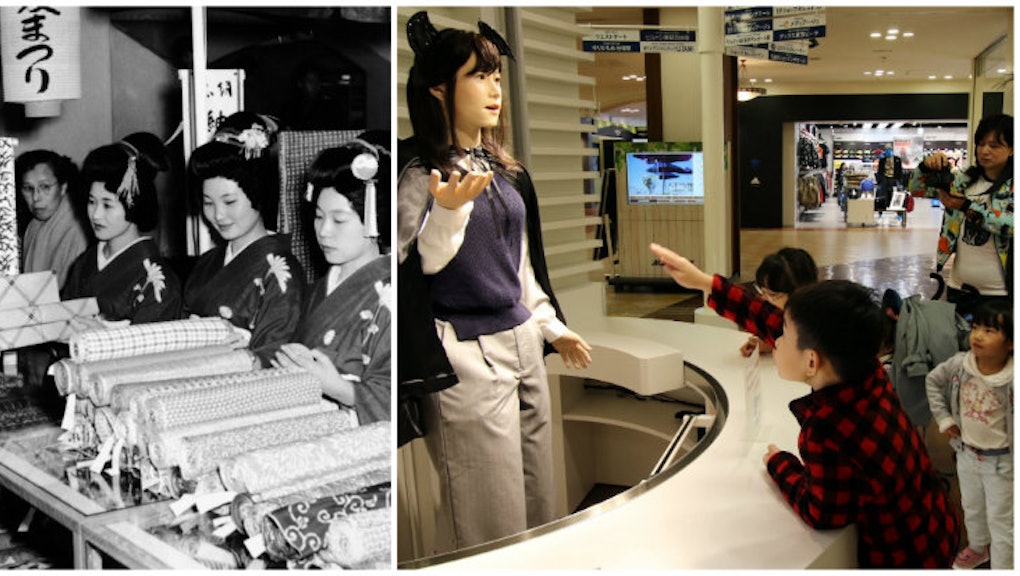 16 Photos of Shopping, Then and Now, Reveal How Our World Has Changed

Think about your first memory of shopping. You were maybe 3 or 4 years old, likely in need of a new pair of shoes every three months. Where did you shop? A mall, probably. Indoors. You were likely wearing casual clothes. And your parents probably paid with the swipe of a plastic card.

Think about how you shop now. Online, right? After all, malls are basically extinct, and our entire tech-obsessed world has moved online, especially onto our phones.

How we shop says as much about our world as any history book, from what we like to do to where we like to go, and how modern conveniences and technology have influenced that. From phones to face masks to car-clogged streets, what surrounds us when we shop is an important reminder of how our lives have changed.

Here's how shopping in some of our most beloved (and hectic) cities have changed over the past 118 years.

We interact more with technology than humans, like this robot in Tokyo.

Shopping in Tokyo in 1956 was all about tradition, while shopping there now is all about ... robots. Le sigh.

In the image on the left, a number of traditionally dressed women check out rolls of fabric. It may be the most quietly glamorous transaction between people we've ever seen, especially compared to today's bizarre, tech-loving world. In just a few decades, we've managed to replace human-to-human interaction with human-to-computer. Instead of checking out with a cashier, lots of people have moved to just checking out on their computers or phones.

The image from 1945 Paris is a typical scene: a wife getting out her wallet to pay for some groceries. But now, the days of paying for something with cash or coins or even a check are seeming more and more ancient.

Over the past few years, we've brought technology into the way we pay. That's gone from credit cards to phones (who needs plastic cards?), using the same phones to pay that we do to communicate and get coupons on, too. Soon, it seems, paper money will be deemed worthless, as will the typical wallet.

Our shopping landscape is now rife with luxury designers, even for regular folks.

Los Angeles in 1942 is practically unrecognizable to the L.A. we know today. Back then, streets were lined with markets and department stores selling affordable, mass-produced clothing. But now, since Los Angeles has gone through its own luxury shopping boom, the streets are lined with stores like Chanel and Prada. Throughout America broadly, it's not rare to find a luxury store in a mall or other instances of luxury brands injecting themselves into everyday lives (hello, Instagram).

We shop — and do pretty much everything else — indoors with air conditioning.

Compared to shopping in 1897, shopping in New York City now is a temperature-controlled paradise. We're still cramped and there are definitely still too many people, but hey, at least we finally got central air. The better our technology gets, the less comfortable we are with doing things like, y'know, going outside, save for farmers markets and music festivals. Now we get to be around too many people with a cool breeze on our necks — or an icy blast.

While the image on the left shows a bustling market in Seoul in 2001, the image on the right shows just how devastating and serious a city's pollution can become. In just 14 years, Seoul has clearly exploded but experienced some of the negative side effects of modernization in the process.

While people are still out and about (and looking mighty fashionable), it's important to note that these two images were taken less than two decades apart.

The willingness to wait in line for something coveted never disappears.

Back in 1929, these lovely-looking Parisians were probably lining up for the necessities (remember the Great Depression?) while these nerds on the right are lining up for a phone.

The joy of leisurely browsing remains the same.

Of course Parisians have retained some of their spirit. In this picture from 1934, we can see women browsing what looks like a food market, while the woman from our present day checks out perfume. Same counter setup and same relatively pleased-looking women checking out the goods.

Glamorous women shopping alone are just as goddamn glorious today as in 1963.

It's pretty nice that the women of Rome haven't changed as drastically (or plastically) as, say, the women of Los Angeles. The woman on the left here, in an image taken in 1963, is the Swedish actress Ingrid Bergman, and the modern woman on the right is just as fabulous.

Clearly, the times have definitely changed for the better in some countries, while others are sticking to a classic status quo. Whatever the city's vibe may be, they've all got a spirit worth celebrating — at least until all shopping moves online.