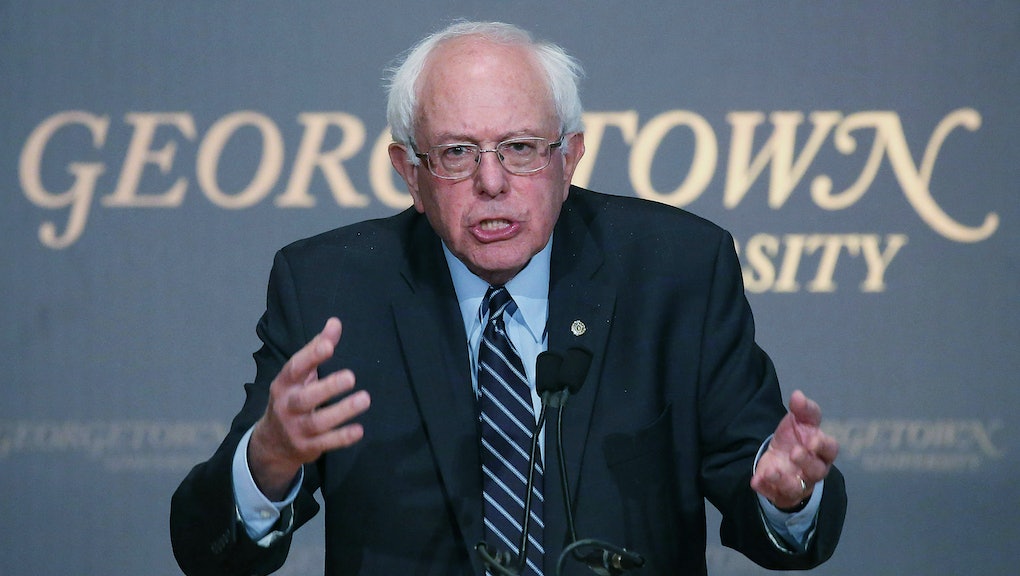 As international negotiators enter their final week of talks to hammer out a landmark climate change accord in Paris, presidential candidate Sen. Bernie Sanders (I-Vt.) released an ambitious climate plan late Sunday night, calling for drastic cuts in carbon emissions and proposing a tax on carbon.

Under Sanders' plan, dubbed "People Before Polluters," the United States would slash carbon emissions 40% from 1990 levels by 2030 and 80% by 2050. The proposal urges an end to subsidies for fossil fuel companies, a ban on offshore oil drilling and massive new investments in clean energy technology. Sanders vows to move the U.S. toward a 100% fossil fuel-free economy, although his plan does not set a deadline for doing so.

The plan would create 10 million new jobs in the clean energy industry, according to the Sanders campaign.

"The climate plan released by Sen. Bernie Sanders today shows that he has broken free of the corporate and 1% money that has held back climate policy for far too long," Greenpeace U.S. Executive Director Annie Leonard said in a statement released by the Sanders campaign.

The background: While Sanders' climate proposals will be viewed in the context of his battle for the Democratic presidential nomination, his plan builds on ideas he's laid out before, including a carbon tax. In 2013, Sanders and Sen. Barbara Boxer (D-Calif.) introduced legislation imposing a tax of $20 per metric ton of carbon of methane. Economists across the ideological spectrum — from liberal New York Times columnist Paul Krugman to Gregory Mankiw, a Harvard professor and former chairman of President George W. Bush's Council of Economic Advisers — have argued that putting a price on carbon is the most efficient means of disincentivizing fossil fuel pollution.

Sanders' backers in the environmental community point to his lengthy track record on these issues, arguing that it makes him the presidential field's most credible contender on tackling climate change.

"He's been campaigning and talking about climate change for quite some time. And whether you look at his leadership on the Keystone XL pipeline fight, reducing fossil fuel subsidies or his bill to create a carbon tax, he's been a leader out there," Erich Pica, president of Friends of the Earth, told Mic. "Not only that, but he understands the linkages between climate change and economic and social justice."

Pica's group endorsed Sanders in August, citing his "bold ideas and real solutions to addressing climate change, inequality and promoting a transformative economy that prioritizes public health and the environment over corporate profits."

While Sanders and former Secretary of State Hillary Clinton are winning the bulk of the green community's support, Democratic hopeful and former Maryland Gov. Martin O'Malley has attracted attention for his own sweeping climate plan. O'Malley's plan, rolled out in June, also calls for a 100% clean energy economy, but unlike Sanders, it specifies a 2050 deadline. Like Sanders, O'Malley advocated a halt to offshore drilling.

For her part, Clinton has outlined a climate agenda emphasizing new investments in clean energy technology, with the goal of generating 33% of U.S. electricity from renewable sources within a dozen years. While that's less ambitious than the plan Sanders unveiled Monday, the New York Times noted in July that Clinton's targets go further than those laid out by President Barack Obama, who champions a 20% renewable economy by 2030.

Sanders, who has identified climate change as the chief threat to U.S. national security, will also tie his climate agenda to his broader message of combating economic inequality and confronting what he calls "the billionaire class."

Appearing on CBS News' Face the Nation on Sunday, Sanders said, "It is beyond my comprehension that we can have a Republican Party and Republican candidates who are more concerned about getting huge campaign contributions from the Koch brothers and Exxon Mobil and the coal industry than they are about accepting what the overwhelming majority of scientists are saying."