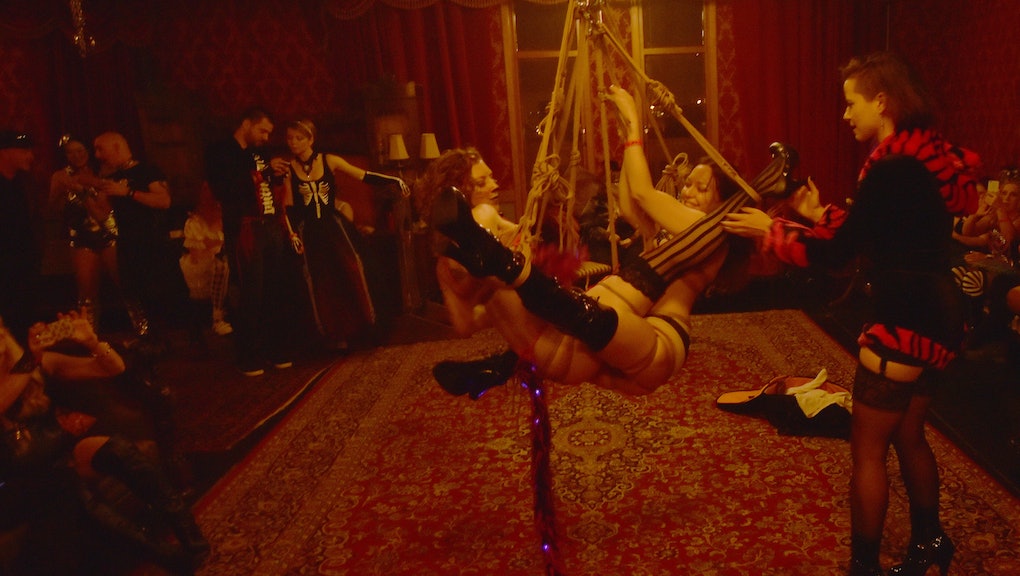 What's Going On At Kink.com, the Studio at the Center of the James Deen Allegations?

Known for its sex-positive, feminist sensibility and emphasis on consent, Kink promptly ended its relationship with Deen following the accusations, saying in a statement that "our performers deserve not only safe sets, but the ability to work without fear of assault."

But a number of performers and members of the adult film industry tell a different story about the studio's record of pushing workers to beyond their limits and turning a blind eye to their safety, whether during scenes or within its sprawling space in the San Francisco Armory.

As BuzzFeed reports, Kink has been at the center of multiple lawsuits alleging the studio failed to ensure a safe work environment. In one lawsuit, a former employee of Cybernet Entertainment, the company that owns Kink.com, alleged that she was "placed in an unsafe work environment" during a bondage scene and was fired when she brought her complaints to Kink.com management.

In three other lawsuits, performers Cameron Adams, Joshua Rodgers and an anonymous John Doe allege that they contracted HIV on a Kink.com set as a direct result of the company's negligence — a claim that Kink.com has long denied, with the studio issuing a statement in Aug. 2015 stating that none of the performers that the former employees worked with were HIV-positive, so they could not have contracted HIV on set.

The allegations don't stop there, according to several adult stars who told Mic that Kink has a history of mistreating or exploiting sex workers. Performers who have worked for the studio claim Kink has ignored performers' personal boundaries and retaliated against models who critique company practices.

In an interview with the Daily Beast, Nicki Blue alleged that Deen assaulted her with a beer bottle and urinated in her mouth at the Speakeasy, a bar on the premises of the San Francisco Armory. While she said she reported the assault on a Kink.com message board, the post was later deleted. (A Kink.com spokesperson told the Daily Beast that despite multiple attempts, Blue's original post could not be found.)

Harris*, a former Kink performer who worked for the company between 2012 and 2013, told Mic that the studio also discourages performers from using condoms, despite the fact that it publicly claims performers are free to use condoms during shoots if they wish.

Harris added that "[Kink's 'consent is essential' and 'anyone can ask to use condoms at any time' is just marketing copy."

"While performers are given safewords to slow down or stop a scene, using them will also result in visibly and vocally frustrated production crew ... With the audience and the tense production staff, I could easily see a model being too afraid to speak up [about boundary violations on set]."

"I could easily see a model being too afraid to speak up."

In response to the allegations, Kink spokesman Michael Stabile told Mic the studio relies on a condom-blind hiring process, meaning directors are unaware of a performer's preference until he or she arrives on set. Stabile also said performers are able to determine whether they consent to specific acts before or during a scene (often relying on a "no" list that designates which acts or other performers are not permitted in shoots), and that they are also able to debrief confidentially with Kink's talent office after completing a shoot.

"At the end of each shoot, a performer meets with the talent office to discuss the scene, and any issues they had with the filming, crew, performers or directors," Stabile said. "The talent department is probably the most performer-centric part of the company, and anything that's said there can be held in confidence. It can be anything from 'I didn't really like this type of shoot' to 'I don't want to work with that performer again.'"

But some performers say that's not enough to quell the unease they feel about Kink's shooting practices, sometimes before they even agree to work with the company. Another adult model who has performed for a handful of other companies told Mic that when Kink approached her to arrange a shoot, her initial conversations with the studio left her concerned that the studio took a fluid approach to performers' boundaries.

"I feel like even then they were trying to push me to do something I didn't feel comfortable with," the performer said. "I said no to working with trans women and they were really pushy about that, basically trying to talk me into it ... Most things I said no to they tried to demand why I said no and explain why it would be OK."

The performer also claimed Kink offered to hire her to shoot for one of the company's nearly two dozen websites only if she agreed to shoot for several others. "The way it was explained to me was that you can't just commit to one site, you have to commit to more than one site," she said.

Stabile said that while performing for other Kink sites might be presented as an option, it's never required. "If a performer wants to shoot for only scene, or one type of scene, that's how we shoot. From a quality standpoint, we want people who are honestly into the material they are shooting," he said. Stabile added, however, that there might be circumstances where new performers are asked to shoot for multiple sites because "a director might not want to shoot them until they had already performed on more basic sites."

Yet perhaps the most damning allegation against Kink.com is that the company may have previously known about Deen's history of alleged assault. Harris told Mic the studio "has known about Deen's behavior and turned a blind eye to it for some time now," in large part due to Deen's having dated Princess Donna Dolore, a performer and director for Kink.com. (Princess Donna has not responded to press inquiries, but she did express support for Stoya's allegations against Deen on Twitter.)

In response to the allegation that Kink.com continued to feature Deen due to his relationship with Princess Donna, Stabile said that while the relationship "wasn't a secret ... it wasn't a reason we kept him around. We have nearly two dozen sites, and Donna was only one of many directors who worked with James on a regular basis."

While Stabile acknowledges that Kink.com should've done a better job "connect[ing] the dots" and tracking Deen's behavior, he denies that the company knew of the abuse allegations beforehand. Yet even if Kink.com had heard whispers of assault allegations, they wouldn't have been alone. In the wake of the Deen allegations, many performers have said that they had heard rumors and warnings about Deen's behavior for years.

It wasn't until women started coming forward with stories of abuse, however, that adult companies like Kink and Evil Angel started to cut ties with Deen. The former Kink performer said this was largely due to a fear of being blacklisted by the industry at large, or gaining a reputation as a troublemaker on set. "No one wanted to go on record against him for fear of those limited opportunities drying up," he said.

Allegations of a coercive environment are part of a series of concerns that make performers feel unable to speak up at Kink, but also appear to reflect larger questions about worker safety within the adult film industry, which is largely unregulated and left to handle charges of sexual assault and abuse on its own.

"You think 'Shit, I've already bought my plane ticket, I've already found a place to stay [so I'll just do it anyway].'" Stryker explained. "You'll consent, but are you consenting from a place of power? No. That's the kind of thing that's more common, and that's because we don't have contracts that are written up, generally."

The lack of regulation or internal resources essentially leaves sex workers to report assault among themselves, which can lead to performers garnering reputations as troublemakers or pot-stirrers. "It's such a high pressure situation — it's like everyone's paycheck is on the line," adult performer Sydney Leathers, who has not shot for Kink.com, told Mic. "It's such a small industry too, and word travels fast. If you get a reputation as someone who doesn't do what you're asked to do, you might not get hired by other companies."

Maxine Holloway, a former Kink cam girl, knows this firsthand. Holloway was fired by Kink.com after publicly criticizing its wage policy. She signed a legal agreement barring her from speaking publicly about her experiences with Kink after settling a 2013 lawsuit with the company, and therefore referred only to general practice throughout the industry.

Holloway added that even when performers are explicitly given opportunities to speak up after a shoot, it's still intimidating for reasons specific to both to sex work and to society's attitudes about sexual assault. "There's this really deep history of people not believing sex workers or believing that their limits can be pushed or violated, and there's always a question: Is anyone going to believe me?" she said.

The lack of resources for performers who've experienced sexual assault was brought into sharp relief after Deen resigned as the chairman of the Adult Performer Advocacy Committee, the preeminent sex worker advocacy group and the closest thing the industry has to a union. Following his resignation, adult star Chanel Preston took over his role. Recently, however, Preston publicly confirmed her romantic relationship with Deen — leading many to speculate whether she has a conflict of interest — which might deter other performers from coming forward.

As the Deen allegations have made clear, performers face a conundrum in trying to form an organization where they can speak safely about workplace violations.

"Having [an advocacy group] that is performer-run is important," Holloway said, "but there's a hierarchy and power dynamic between performers as well, especially right now. I think that is going to be a big challenge, as far as people feeling confident and safe and having some type of performer-run organization be a resource."

It's the same challenge studios like Kink are considering as they beef up transparency and efforts to encourage performers to report violations. According to Stabile, the company has plans to update its Model Bill of Rights and is reevaluating the reporting structures it currently has in place. Kink also plans to share its "no" lists among directors.

"If performers don't feel comfortable coming forward about this, other performers are going to suffer," Stabile said. "I read in a lot of the accounts that performers felt they didn't know how to report it or that they didn't think they'd be believed. That goes beyond workplace safety and speaks to sexual assault in general. We need to communicate to people how they can report these things and make sure they know there will not be retribution."

It's unclear, however, whether this encouragement will be enough to get sex workers to report violations, especially without assurance that it won't result in future employment discrimination. That puts additional onus on studios like Kink to pay closer attention to patterns, such as which performers appear consistently on other models' "no" lists.