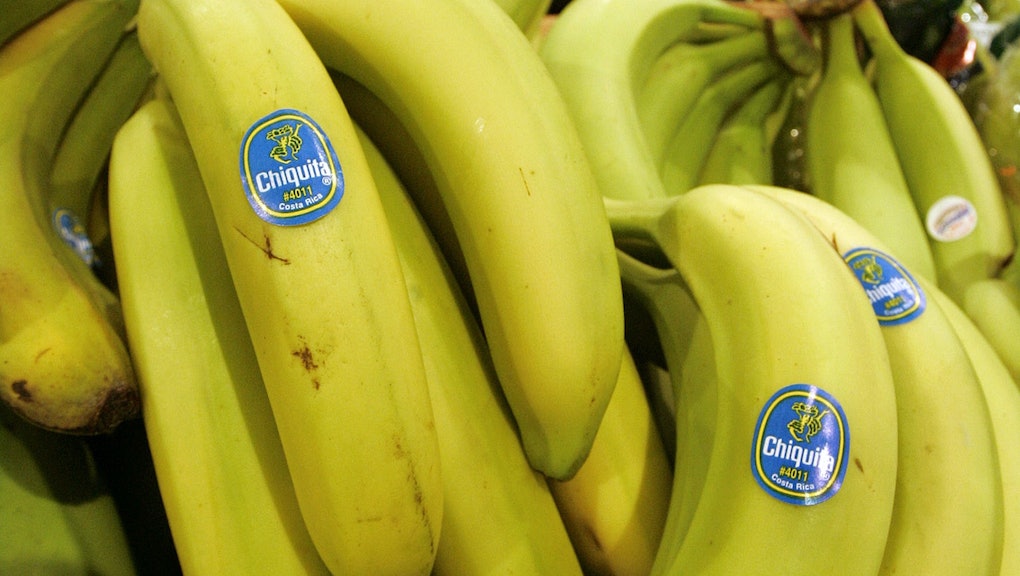 The world's most popular fruit is under attack: Tropical Race 4 — a new strain of the banana blight, Panama disease — is killing off banana crops worldwide.

The disease is caused by fusarium, a pathogen that infects soil and strikes banana plants at the roots, causing them to rot from the inside. According to a recent study by PLOS Pathogens, TR4 first popped up in Cavendish bananas, which the Washington Post reported makes up 99% of the global market, in Taiwan during the 1960s but wasn't identified as such until 1994. It's since spread across Asia, to Australia and Africa and across the Middle East. Panama disease will ultimately end up in Latin America, the largest producer of bananas in the world, home to both Dole and Chiquita fruit companies, the Washington Post reports.

The New Yorker reported TR4 has been called "the HIV of banana plantations," a disease that spreads as people unwittingly replant infected Cavendishes in new locations or transport tainted soil to new locations. "This is an insidious disease in that it can move ... by soil-contaminated machinery, tools — that kind of thing," Randy Ploetz, University of Florida professor of plant pathology and the man who discovered TR4, told Quartz in March 2014, which reported that "as much as 85% of global banana output is vulnerable to Tropical Race 4."

"Nearly 9/10 of the world's bananas are eaten in poor countries," Quartz reported, where "bananas are often a basic source of nourishment for at least 400 million people. The average person in Uganda, Gabon, Ghana and Rwanda relies on bananas and plantains for more than 300 calories each day." If the blight wipes out Cavendish crops, these 400 million people will be deprived of a crucial source of daily nutrients. And the world loses its fourth most valuable market: Quartz reported that banana and plantain production pulls in $44.1 billion each year.

The Cavendish was adopted as the global market's top banana after Tropical Race 1 wiped out the Gros Michel in the 1960s. Since it was resistant to TR1, it seemed like a safe alternative, and, as Quartz reported, its uniform size, high crop yield and ability to remain in reasonably good condition after long shipping journeys added to its appeal.

But bananas are a monoculture, and that's their Achilles' heel.

Each Cavendish banana is a clone, genetically identical to every other Cavendish banana on the market. Consumers expect a certain taste and texture from bananas, and thanks to the monoculture method of production, they get it — no matter where in the world they are.

The monoculture "helps companies like Dole and Chiquita control for consistency and produce massive amounts of bananas on the cheap without having to deal with imperfections," as the Washington Post points out. But it also makes them extremely susceptible to disease — a fungus that can infect one Cavendish plant can infect them all.

That is exactly what happened with the Gros Michel and exactly what stands to happen with the Cavendish. "Due to globalization and the fact that the disease is easily transmitted by soil, water and, probably, air," Panamadisease.org says, "dissemination of the TR4 fusarium type to the other important banana production regions (Africa and Latin America) seems to be just a matter of time."