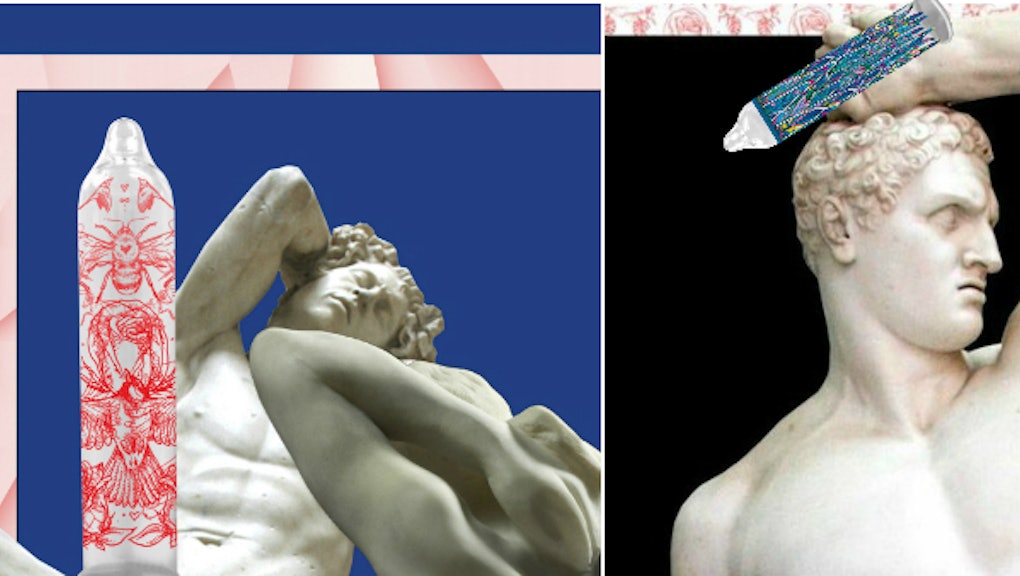 A new crowdfunding project from the French startup Made In Love wants to make a point about the importance of safe sex by combining two of its favorite things: art and penises. The startup is designing condoms with intricate abstract designs on them, combining safe sex and high-end design in one eye-grabbing package.

Here's one of the designs, as modeled by an ancient sculpture with an impressive erection (NSFW, obviously):

The sisters told Mic that the project was inspired by their desire to make traditional condoms less boring and more fun.

"[We] were talking ... condoms and how the image of the condom has not changed in many years," they told Mic in an email. "I mean, you can find blue or green condoms, the 'thin" ones, etc. But the technology of today allows us to do so much more. So we thought, 'Why not art?'"

On their crowdfunding page, they add that they "wanted to change the image of condoms as a constraint and transform it into an object of pleasure and of graphic curiosity"; a goal that, considering 62% of men have reported experiencing erectile difficulties as a result of using a condom, some men might very well appreciate.

This idea is just the latest in a number of innovative projects that have come out over the years aimed at transforming the condom from a boring piece of latex into a multifunctional (or at least more comfortable) piece of intimate equipment.

Earlier this year, a group of students in the U.K. dreamed up the idea of STI-detecting condoms that change color when coming into contact with certain infections (the condom is still in the conceptual stage). Other safe sex entrepreneurs have been working on the technology for spray-on condoms since at least 2007.

Although condoms have been frequently used in art — most recently, in this controversial portrait of Pope Benedict XVI made of 17,000 multi-colored prophylactics — aside from a few novelty condoms featuring politicians and prehistoric animals, few have tried to elevate the design of the condom itself by coming up with attractive new designs.

The sisters behind Made in Love are attempting to take colored condoms to the next level by designing rubbers that can turn men into a bunch of lil' Dickassos — and frankly, we wouldn't be surprised if they become a total hit. After all, look at how popular Hello Kitty Band-Aids are.