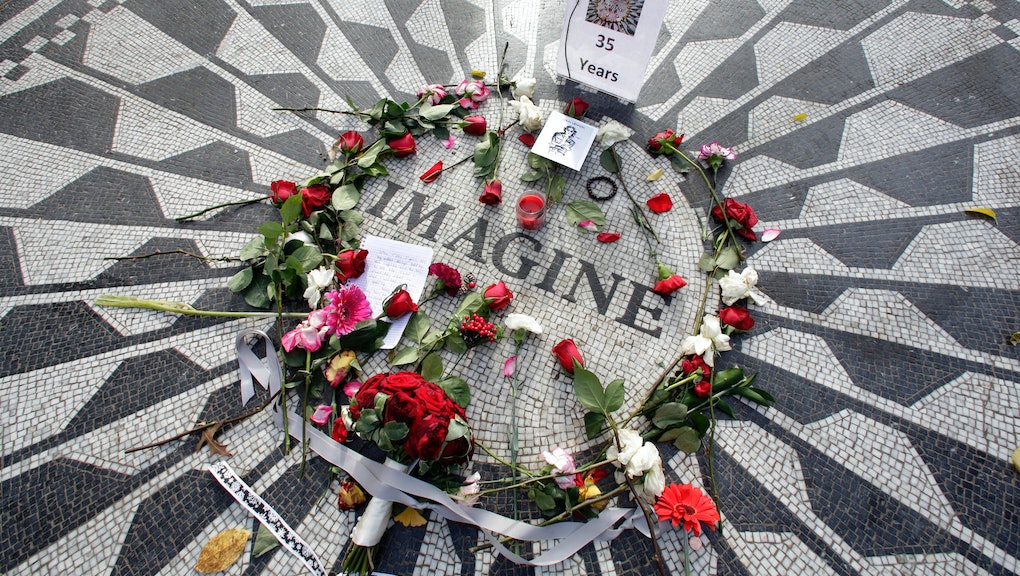 35 Years Ago, the World Lost John Lennon, One of Music's Greatest Political Threats

Earlier this year, Yoko Ono celebrated the 75th birthday of her late husband John Lennon by inviting fans to gather in Central Park and arrange themselves into a simple symbol: a peace sign.

It was an apt symbol to choose, as the sign has come to epitomize much of Lennon's legacy. Lennon urged nonviolence throughout the '60s and '70s, protesting the Vietnam War and all its proponents. But where lyrics like "All you need is love" may have been the start of Lennon's countercultural ideas in music, over the course of his career, his calls for peace and justice became so disruptive, they made him an FBI target during the Nixon years.

Little about Lennon's politics were as straightforward as a peace sign.

As of Tuesday, the 35th anniversary of Lennon's death, he's been deceased almost as long as he was alive. With each passing year in which we don't see a confrontational and universally resonant political musician of his caliber come to the fore, we see more and more clearly how special John Lennon's combination of art and activism was.

Peace can be a divisive idea — especially when you start to get specific about how one should go about making that happen. Lennon knew that better than just about any other artist in music history.

Lennon's activism took many forms over the course of his life, both while with the Beatles and individually. He understood the power of his own celebrity and how to utilize it to guide larger conversations.

In March 1969, Lennon and his newly wedded wife Ono used their honeymoon to stage a bed-in anti-war protest. They invited media outlets to come into their apartment and talk about peace for 12 hours everyday, which the couple later compiled into the artistic documentary Bed Peace. As silly and absurdist as the concept was, which the couple admits throughout their interviews, the images created a compelling portrait of pacifism and nonviolent means of resistance.

"What we're really doing is sending out a message to the world, mainly to the youth, especially the youth or anybody, really, that's interested in protesting for peace or protesting against any forms of violence," Lennon once said of the bed-in. "[W]e think that peace is only got by peaceful methods, and to fight the establishment with their own weapons is no good, because they always win, and they have been winning for thousands of years."

Music, though, was Lennon's primary weapon. There is a very specific art to writing a protest song, which Lennon learned to master over the course of his life.

He learned to couch his political rhetoric, that he spun out in much sharper ways on "Working Class Hero" and "God," with serene melodies and a catchiness to augment the catchiness of the ideas. "Imagine" is one of the finest examples of this balance. "'Imagine' is a big hit almost everywhere — anti-religious, anti-nationalistic, anti-conventional, anti-capitalistic, but because it is sugarcoated, it is accepted," Lennon once said. "Now I understand what you have to do: Put your political message across with a little honey."

Helping those messages to go down smoothly was all part of Lennon's large vision.

"What I'm trying to do is to influence all the people I can influence," Lennon once said in a 1971 interview with the Red Mole, a leftist paper.

Lennon used his music to contribute to more specific causes. He wrote songs decrying the British occupation of Northern Ireland. He wrote for imprisoned Black Panther activist Angela Davis and another for the co-founder of the White Panther party, John Sinclair, who had been given a 10-year prison sentence for possessing two joints.

Lennon sang "John Sinclair" at a 1971 show calling for his release in Ann Arbor, Michigan. The performance made a remarkable impact, and Sinclair was released three days later. However, in addition to Lennon's flower children, the FBI informants were in attendance, taking careful notes. "Lacking Lennon's usual standards," his FBI file reads, according to the New York Times. "Yoko can't even remain on key."

Towards the end of his life, Lennon began to tire of his activism and having to constantly outmaneuver the FBI, which had been diligently working to try and have him deported back to England throughout the early '70s.

In 1972, Lennon had been campaigning around the country telling fans the best way to "Give Peace a Chance" was to vote against Nixon. However, in 1975, when asked about Nixon's departure from the White House, Lennon said, "I'm even nervous about commenting on politics. They've got me jumpy these days." In the '80s, he moved even further away from his radicalism, discounting it as "phony" and motivated by a sense of "guilt" that he was wealthy.

Still, a life so rigorously lived in service to higher ideals cannot be so easily discounted. Lennon may have yearned for more quiet and contemplative twilight years outside of the rages of politics, but the legacy he left behind still shines as a model for all artists seeking to hone an activist bent on their art. U2's Bono described Lennon as writing the "blueprint" for political rock stars.

"He was spot on — bull's eye ... with the message that he spoke," Questlove recently said at an event celebrating Lennon's birthday. "[It] applied to the Vietnam War he was speaking of, and unfortunately all the subsequent conflicts and fights [of] politicians and radical groups."

The sentiments are bittersweet, but incredibly compelling. As long as there is war, Lennon's life and music will be relevant for every student looking to use art as a means to end it.