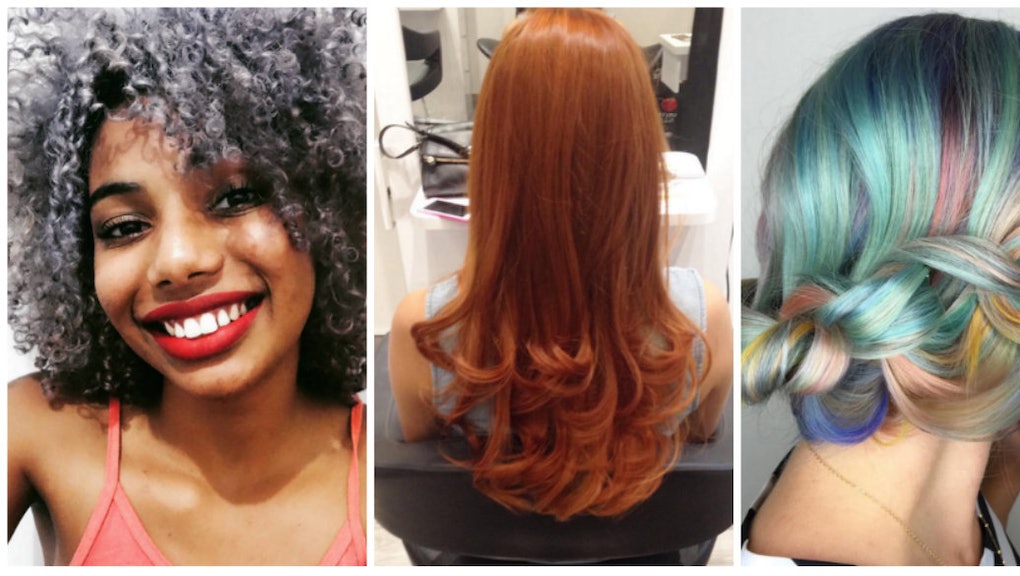 It used to be that new hair trends came each year, or even every few years. Typically it's been a haircut, like Dorothy Hamill's wedge bob or the Rachel or even Posh Spice's "pob."

But this year, it felt like there was a new hair "trend" every day, mostly based on hair color — oh, and each with their own hashtag-ready names, from #opalhair to #pumpkinspicehair. Yet each of these trends, if you peered past the hashtag, appeared mysteriously like one another, or reincarnations of basic colors like, y'know, "blonde" or "brown."

To set the record straight, Mic has created a handy-dandy guide of definitions and explanations for each of this year's hair trends. Just in case you were itching to know what "hair contouring" really is. (It's fucking highlights.)

1. This isn't a groundbreaking look, so much as what your hair looks like when your love of Hot Topic extends into adulthood (not that there's anything wrong with that). Inspired by the colors of the far-out galaxy, this style is all about being different, standing out, probably listening to Good Charlotte and screaming at your mom.

1. Obviously, "sunset hair" is hair dyed to look like a sunset.

3. Also a variant of galaxy hair.

1. Just when you thought you had erased every last horrific memory of summer camp, tie-dye hair becomes a reality.

2. What makes tie-dye hair special is the process one has to go through to get it, which involves tying the hair, wrapping the hair and then, finally, dying the hair in separate sections. And it's all in order to get the result, which looks like someone got mad at you and attacked you with markers.

3. Please don't do this. Your family loves you.

1. As soon as it was safe enough to think Girl Scout camp never actually happened, sand art hair comes along. This is one of the few "hair trends" that take after its name. Remember all of the colors of that technicolor sand we were forced to create trippy vases out of? Well here they are again, but in your hair.

2. Looks like one's head was just swallowed by Puff the Magic Dragon.

1. God help us. OK, so while having something called "chocolate chip cookie hair" may lead you to believe that this trend has girls spotting their blonde hair with brown dots and making it super delicious, it actually doesn't.

2. Also known as "blonde with highlights."

1. Now, if "granny hair" were actually accurate, it'd have young girls wearing their hair in curlers and getting perms. But this is 2015, and nothing is correct anymore.

2. Like Tavi Gevinson famously did years ago, teens in 2015 dyed their hair gray, and "granny hair" was born. In what may have been an ode to iconic ladies like Joan Didion and Helen Mirren, the gray hair trend was, ultimately, just about looking different — but still really cool.

1. You know when there's sometimes pools of oil at a gas station or at, like, a mechanic's shop? This hair is inspired by those puddles. It's called "oil slick" because the colored streaks necessary for this style are purple and blue and dark green, much like the colors found in spilled oil.

2. From the famously creative mind of hair colorist Aura Friedman, oil slick hair is pretty much a toned-down version of sand art hair and galaxy hair, but works great on brunettes.

3. Notably, the colors can be placed underneath the outer layer of the hair, so you get to do a cool "reveal" whenever you whip your hair back and forth.

1. While some beautycasters were insistent on it being the "new ombre," we insist tortoiseshell hair is just brunette with blonde highlights.

1. Ever woken up and thought "I want to sprinkle a precious metal in my hair for no reason at all"? Well then, gold leaf hair is the hair for you.

2. According to Seventeen, all you have to do is comb mousse into your hair, lay gold leaf on top of that and embark into the night without having a nervous breakdown over gold literally raining from your own head.

3. But hey, it is a great way to cover up dandruff.

1. With contouring makeup all the rage, it was only a matter of time until people started incorporating the word into their other beauty rituals.

2. However, we're here to tell you that "hair contouring" is just face-framing highlights.

1. Smokestack hair is ombre hair, but more along the lines of how your alt cousin would dye her hair to piss off her parents. It's super colorful, with the darker shade starting at the bottom fading into a lighter shade to frame the face.

2. We guess you could do worse things to your hair follicles.

1. This is basically what it would look like if one of the characters from My Little Pony had starred in Sofia Coppola's Marie Antoinette.

2. Yet another Friedman creation, "opal hair" is along the lines of galaxy hair, but the hair is dyed with pastel colors, rather than vibrant ones.

1. Other than looking like if Ms. Antoinette got stuck in a batch of sherbet, "macaron hair" is basically pinned-up, curly opal hair.

2. Are you afraid now that they're rapidly cross-breeding? You should be.

1. Does this remind you of that awful rave you went to freshman year of college? Sure it doesn't.

2. As Mic previously reported, glitter roots can actually be both fun and useful. After sprinkling glitter along your part line, it may actually be impossible to rinse it all out but this 'do, popularized thanks to an Instagram post by actress Lucy Hale, does offer the benefit of covering up any visible or greasy roots — and also the opportunity to look like a unicorn.

1. *Starts to cry* Why did it have to come to this? Have we not suffered enough? We are practically drowning in rose gold and here we are... yet again.

1. Mic called bullshit on this trend a while ago, so let us just say this:

So, readers, what have we learned? That literally anything can be turned into a "hair trend." Sure, plenty of them are pretty. In fact, we've seen plenty of gorgeous women this year rocking these colors. But after an edifying year on Instagram, we're hesitant to call anything a "trend" anymore.

And we're just a tad afraid of what hair colors are coming down the Insta-feed pipeline on 2016.