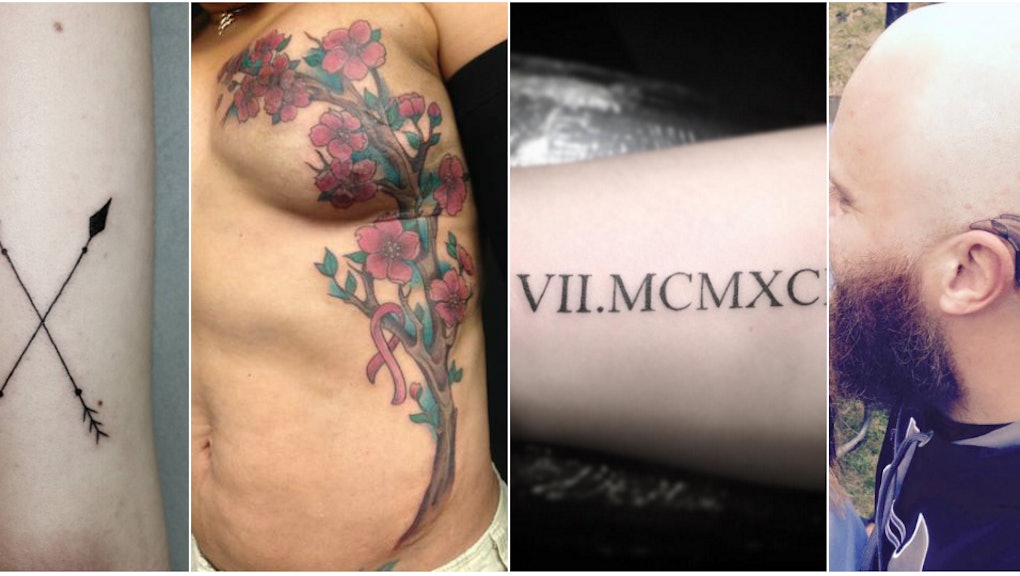 2015 Was the Year Tattoos Spoke Louder Than Words

It's no secret that ink is meaningful. After all, it has to mean something if we're getting it permanently inscribed on our skin. But with tattoos becoming more popular and socially accepted than ever — in the United States, one in five people has one — more and more people have been getting in on the ink, with some beautiful results. Here are the tattoos that defined 2015, from the symbols we live by to the ways our body art can help us heal.

Forget tacking childhood art to the fridge — Keith Anderson, of Ontario, Canada, has gotten a tattoo of one of his son Kai's drawings every year since his son, now a pre-teen, was 5, and Kai even got to do some of the tattooing himself. That's a whole lot more meaningful than stashing the drawings in a box somewhere.

Survivors of domestic violence got a chance to turn their scars into something beautiful.

Brazilian tattoo artist Flavia Carvalho launched the "A Pele da Flor" (the Skin of the Flower) project, in which she tattoos — free of charge — beautiful designs over the scars of domestic violence survivors. She's covered up scars from stab and bullet wounds, among others, making sure at least a little bit of good comes out of an otherwise painful situation.

A few lucky people decided to live in the moment with surprise tattoos.

Tattoo-artist-to-the-stars Scott Campbell proved ink can be high art with his Whole Glory exhibition in October. Visitors to NYC's Milk Gallery, selected by lottery, could get a free tattoo by the famed artist. The catch? They had to stick their arm through a hole in the wall and could not give any input or communicate with the artist, who in turn knew nothing about them. It might sound like a formula for regret, but based on the results, it looks like the recipients got not just awesome tattoos, but great stories and memories as well.

The Semicolon Movement made this underused punctuation a symbol, often on the wrist, of one's struggle with depression, self-harm, personality disorders and other mental illness. "The semicolon is used when a sentence could have ended, but didn't," the movement founders write on their website.

We inked odes to our wanderlust.

Map tattoos have been quickly gaining popularity, and with a globally connected world and our love of travel, is it any wonder? Whether we're keeping track of where we've been or mapping the locales that mean the most to us, map tattoos remind us of the big wide world out there — and our place in it.

Women who've had mastectomies had a chance to regain a sense of self.

Tattoo artists, including Carvalho, have been giving gorgeous, intricate tattoos to breast cancer survivors, covering up their mastectomy scars with pretty designs. At a time when many of these women struggle to feel beautiful and womanly, these works of art can help them heal. There's even a website dedicated to connecting survivors with artists who specialize in these tattoos.

We memorialized the numbers that matter to us ...

Blame it on Angelina Jolie, who has tattoos of the coordinates where each of her children were born. Number tattoos have exploded in popularity lately, whether coordinates or Roman numerals of important dates. Small and simple, these tattoos are a subtle and elegant tribute to the numbers that matter in our lives.

Have you ever loved a line of literature so much you just had to have it on your body? You're not alone; text tattoos are trendier than ever, and everyone — from celebrities to English majors — is getting in on the literary action. Whether it's a simple phrase or something more complex, ink is a fitting tribute to our favorite books.

Parents got tattoos so that their kids wouldn't feel different.

In New Zealand, Alistair Campbell got a cochlear implant tattoo to match the real-life device his 6-year-old daughter, Charlotte, has to wear. Meanwhile, in England, parents Tanya and Adam Phillips reportedly got leg tattoos to match their toddler daughter Honey-Rae's large red birthmark, which Tanya told the Mirror initially "broke [her] heart," but which the three now wear with pride.

Arrows reminded us that we are always moving forward.

Christened among the year's trendiest tattoos by Pinterest and Tattoodo, arrow tattoos took off. Part of their popularity is also probably due to their versatility; though the design works in any size, they can be done very small, can be placed anywhere on the body and are highly customizable, from simple line drawings to elaborate feathered arrows.

These tattoos are also a reminder that — much like life — an arrow has to be drawn back before it can shoot forward.