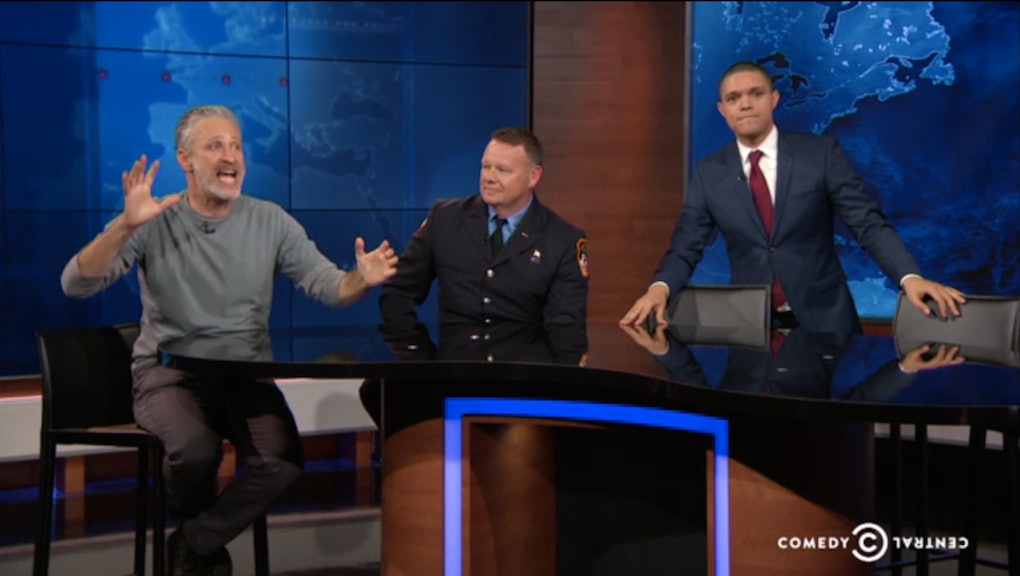 Just months after giving up his chair as host of The Daily Show, Jon Stewart made an emotional return to the Comedy Central show to press an issue that he has long championed — the health and welfare of 9/11 first responders.

Stewart was in Washington, D.C., last week to press the issue of the James Zadroga act, which was designed to guarantee first responders federally funded health care. The law was allowed to expire in September, and recent efforts to insert the legislation into a highway bill failed.

In the Daily Show segment, Stewart stalks the halls of the Russell Senate Office Building, cornering lawmakers and staffers one by one. The retired "fake news" host was accompanied by a number of actual 9/11 first responders.

"Very rarely do the people appear," Stewart said as he prowled the hallways in search of senators. "They're like in many ways meerkats or prairie dogs. They may lift their heads up, but if they sense danger, something coming with information they don't like, boom. Right back into the hole."

Stewart's assessment proved remarkably accurate. Aides for senators — Kentucky's Rand Paul, Ohio's Rob Portman and Wisconsin's Ron Johnson — swapped contact info with Stewart, but were unable to produce their bosses or any meaningful commentary on the subject. (Meanwhile, Stewart did learn that Wisconsin is the largest producer of cranberries in the United States.)

At one point, Stewart was greeted by a contingent of lobbyists who only identified themselves as "new energy," as they brushed passed him for a meeting with Portman. The comedian ultimately catches Portman, who told 9/11 first responder and activist John Feal that he was sympathetic to cause but that we needed to "find a way to pay for it." The answer didn't satisfy Feal. "When you guys want to find money, you know you can find money," he said, finger wagging. "So that 'paid for stuff,' it's not passing the litmus test with me."

Stewart later noted that Portman changed his position shortly after the encounter, and is now supporting the bill's passage.

Stewart told his successor Trevor Noah and the show's audience that the bill has 67 Senate sponsors and the 260 representatives which "even by stupid Senate and House math is more than enough to do this." He accused Senate Majority Leader Mitch McConnell of pulling the legislation from a transportation bill because he did not win concessions on "loosening oil export regulations."

The Zadroga Act faced similar hurdles before it was first passed in 2010, with Stewart playing a major role in its passage when he hosted a panel on his show of 9/11 first responders.

Five years later, Stewart decided to reunite the old gang for a follow-up. And that's when the segment took a dark turn.

Stewart rushed to a table where he found only one man waiting, surrounded by empty chairs. Where four once sat, there was just retired New York City firefighter Kenny Specht. Of the three other original panel members, two of them — Ken George and Chris Baumann — were too ill to return, and the fourth, John Devlin, had died. "This is the reality of people's lives that are affected by this," Stewart said.

"It's unacceptable to tweet and post on Facebook around the anniversary of September 11, that we'll never forget and it's inexplicable to continue to get re-elected off the backs of the soldiers of this country and the first responders and then when you get a chance to do something about that, to back from it."

Stewart concluded with a plea to "end the fuckery," imploring viewers to put pressure on Congress, McConnell and House Speaker Paul Ryan to "do the right thing," using the hashtag #WorstResponders.