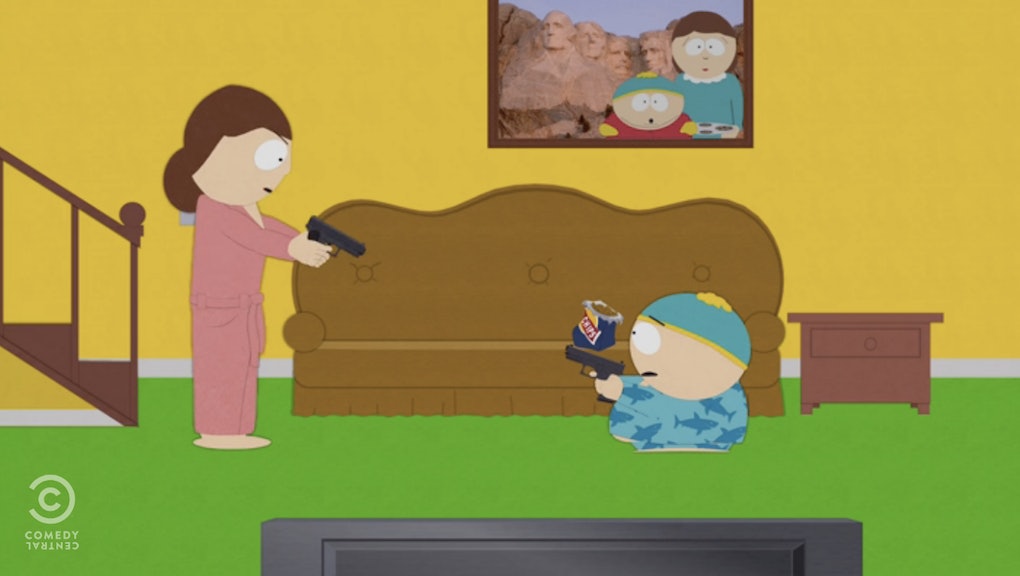 Since the Wednesday shooting in San Bernardino, California, which left 14 people dead and 21 injured, the country has yet again found itself in the paralyzing gun control debate. Paralyzing to everyone, of course, except South Park creators Matt Stone and Trey Parker, who have never been known to shy away from the issues spooking the nation.

During the teaser for the episode, "PC Principal Final Justice," Cartman and his mom get in an argument about bedtime, when the fourth-grader pulls a gun on her.

"Eric! Where did you get that?" his horrified mother asks. The confrontation escalates when Mom tells Eric to "get his butt to bed."

And with that, Ms. Cartman whips out her own gun. "I TOLD YOU TO GO TO BED RIGHT NOW."

And so goes the all-American, happy family scene.

The show's writers have zeroed in on, and made a mockery of, just how out of control gun violence in the United States has become. And few things exemplify this better than a Parents Against Gun Violence Facebook post from the day after the shooting in San Bernardino.

The nonpartisan group that advocates "many common-sense policies that can reduce gun violence, and especially the risk of harm to children," saw its powerful anti-gun violence Facebook post quickly go viral, with almost 13,000 shares.

The post, "A few of the reasons people shot people in November, 2015," lists 13 painfully asinine circumstances in which people fired their gun at someone, in some cases killing them. Each item is written to assume the perspective of the alleged shooter.

"A woman complained about the pornographic movie playing in my SUV in the drive-thru line at McDonald's, so I shot the 13-year-old kid in the back seat of her car. (FL, 11/03)," reads one.

Other high-profile outlets have hit on the country's epidemic of senseless gun-violence and the ubiquity of firearms in their own ways.

One such instance is the latest New Yorker cover, which pictures a white couple gleefully purchasing war-grade weaponry in a supermarket.

"What would it look like if I took America's obsession with firearms to its logical extreme?" cover artist Eric Drooker asked.

Examples laid out in the Parents Against Gun Violence post make the scene between Cartman and his mother a chillingly fathomable one.

South Park is well-reputed for its absurdist portrayal of social and political zeitgeist, making this season's finale par for the course. Known for its boundary-pushing, with zero interest in the concept of "too soon," it's the only fictional series on TV willing to broach the subject satirically less than a week after the California tragedy.

Not that we expected anything less.