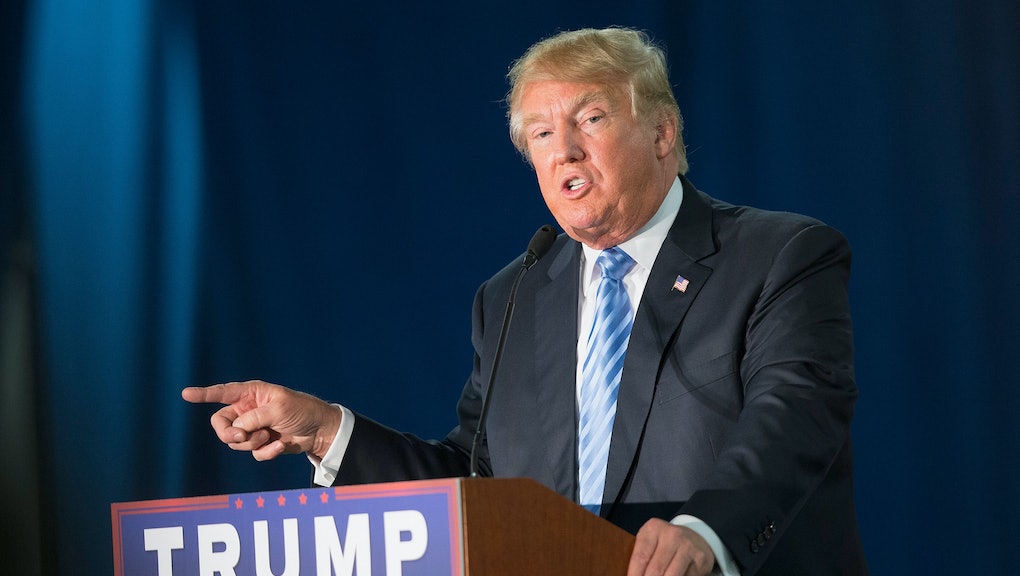 Dear America: This Is Your Republican Presidential Frontrunner, Donald Trump

If real-estate billionaire Donald Trump's call to ban all Muslims from entering the country shocked you, you truly haven't been paying attention.

While his increasingly heated rhetoric has inspired comparisons from fellow Republican and Ohio Gov. John Kasich to Martin Niemöller's famous "First they came ..." poem about the Nazis, all signs suggest that Trump is actually coming for just about everyone.

Here are all the people Trump — who, it cannot be overstated, is still the GOP frontrunner for president — has offended during his ongoing campaign to be leader of the United States.

Trump proudly admitted to using sexist putdowns against comedian and actress Rosie O'Donnell in the first Republican debate this year, agreeing he had used terms like "'a fat pig,' 'dogs,' 'slobs' and 'disgusting animals.'"

And then there was the denigration of fellow candidate and former Hewlett-Packard CEO Carly Fiorina, whose physical appearance he mocked in a Rolling Stone interview. "Look at that face!" he said. "Would anyone vote for that? Can you imagine that, the face of our next president?!"

As if the diatribes against the "Mexican government," and his insistence that undocumented immigration to the U.S. is a deliberate antagonism on its part weren't sufficient to underscore his distaste for our neighbors to the south, Trump called the estimated six million undocumented Mexican immigrants in the U.S. a gang of subhuman drug-dealers and "rapists."

Trump told award-winning Mexican-American journalist Jorge Ramos to "go back to Univision," an American Spanish-language media company that Trump says is controlled by the Mexican government.

And getting personal, Trump insulted fellow candidate and former Florida Gov. Jeb Bush's Mexican-American wife, Columba Bush, who has been in the U.S. since the 1960s.

When he's not insisting he has a "great relationship with the blacks," Trump has been busy insinuating terrible things about them, like retweeting a far-from-substantiated neo-Nazi meme that suggests blacks are responsible for the vast majority of murders of white people in the country.

In late November, Black Lives Matter organizer Mercutio Southall was attacked by a combination of security and all-white Trump supporters at a Trump rally. The candidate's response? "Maybe he should have been roughed up because it was absolutely disgusting what he was doing."

And then there are the pointed remarks aplenty about President Barack Obama's race.

Trump still leans on the "birther" conspiracies which raise doubt about Obama's citizenship, years after endorsing the idea that perhaps the president was born outside of this country and is a Muslim.

But, really, just the state's Muslims. In recent weeks, Trump has doubled down on his claim that he witnessed thousands of New Jersey Muslims celebrating 9/11. "I know it might be not politically correct for you to talk about it, but there were people cheering as that building came down ... and that tells you something. It was well covered at the time." That so-called coverage, if it exists, remains at large, and virtually everyone with personal knowledge of the rumored incident has denied his version of the events.

At a speech for the Republican Jewish Coalition in December, Trump said all of the following things:

"Stupidly, you want to give money ... You're not going to support me because I don't want your money."

"Is there anyone in this room who doesn't negotiate deals? Probably more than any room I've ever spoken."

In a November rally, Trump mimicked New York Times reporter Serge Kovaleski, who has arthrogryposis, a genetic disorder that affects his appearance.

Trump later insisted he did not personally know Kovaleski, nor was he aware of the reporter's condition.

But in the Times, Kovaleski said he and Trump were "on a first-name basis for years ... around a dozen times, I've interacted with him as a reporter when I was at the Daily News."

They're collectively a "Trojan horse," according to Trump.

"I'm putting people on notice that are coming here from Syria as part of this mass migration, that if I win, they're going back," the candidate said in September. "They could be ISIS ... This could be one of the greatest tactical ploys of all time. A 200,000 man army maybe. I don't know that it is, but it could be possible."

When a heckler interrupted a speech he was giving in Worcester, Massachusetts in November, Trump bashed the man for his weight.

"You know, it's amazing," Trump told a chanting crowd as the man was removed, according to People, "I mentioned food stamps and that guy who's seriously overweight went crazy. He went crazy. It's amazing."

During an August rally in Iowa, Trump mocked the speech patterns of Asian business negotiators.

"Negotiating with Japan, negotiating with China ... When these people walk in the room, they don't say, 'Oh, hello! How's the weather?'" Trump quipped. "'It's so beautiful outside. Isn't it lovely? How are the Yankees doing? Oh they're doing wonderful. Great.'"

He's also not sure whether he disagrees with President Franklin Delano Roosevelt's widely denounced decision to force hundreds of thousands of Japanese-Americans on the West Coast into camps during World War II, telling Time the policy was "tough" but that "winning is tough. We don't win anymore."

After Democratic candidate Martin O'Malley apologized for turning the subject away from "black lives matter" to "all lives matter" at a campaign event, Trump called him a "disgusting, little, weak, pathetic baby."

Trump has also gone after "anchor babies," falsely stating the children of undocumented immigrants do not qualify for birthright citizenship.

Trump has never served in the military, but that didn't prevent him from mocking Arizona Sen. John McCain, an Air Force pilot and former POW whose aircraft was shot down during the Vietnam War, for getting captured.

"He's a war hero because he was captured," Trump said in July. "I like people who weren't captured."

In December, Trump advocated what Institute for Advanced Study researcher Michael Walzer confirmed to Mic would be a literal war crime. The candidate said that to fight the Islamic State group, the U.S. military should "take out their families."

"The crucial moral and ... legal requirement ... is to distinguish between combatants and civilians and noncombatants, and to attack only the combatants," Walzer told Mic. "To target the innocent is the worst crime of war."

Trump thinks the name of the Washington, D.C. football team, the Redskins, is not the offensive slur as it is defined by the dictionary.

"Honestly, I don't think they should change the name, unless the owner wanted to," Trump told the New York Times. "I know Indians that are extremely proud of that name. They think it's a positive."

Half of the country

According to Trump, 50% of the country says "we're not going to do anything."

"We have to create incentives that they actually do much better by working," Trump told Fox News host Sean Hannity in June. "Right now, they have a disincentive. They have an incentive not to work."

"The problem we have right now, we have a society that sits back and says we're not going to do anything," he said. "And eventually the 50 percent cannot carry — and it's unfair to them — but cannot carry the other 50 percent."

Trump wants them all out of the country, including American citizens, because they're all potential terrorists. He also flirted with the idea that, just like Japanese-Americans 70 years ago, it's time to start putting them all in camps — or maybe just put them all in a mandatory security database.

With regard to Trump's stance on Islam, what more do you need to know?

This post will be updated as Donald Trump continues to distribute his two cents' worth.