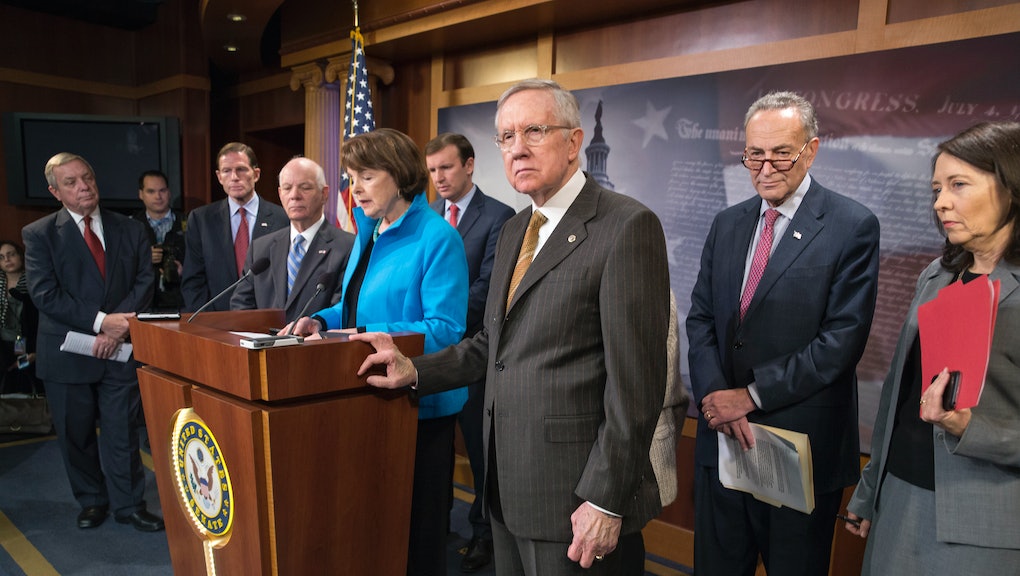 In the wake of the San Bernardino, California, shooting and the growing fears of the shooters' links to Islamic terrorism, Democrats have taken to the airwaves to blast Republicans for refusing to prohibit individuals on the no-fly list from purchasing firearms. The desire to capitalize on sound bites and force the GOP to go on record defending suspected terrorists' ability to buy an assault rifle is powerful — powerful enough to force a failed vote in the Senate and an endorsement by President Barack Obama in a rare address from the Oval Office.

Unfortunately, what may make for a good sound bite in our terror-soaked news cycle doesn't necessarily make for sound gun control policy. Furthermore, the Democrats' pursuit of this proposed solution not only misses the mark on a policy level, but also actually works against their supposed goals of enacting meaningful gun law reform.

Good optics over good policy: Civil liberty groups and private individuals have been fighting watch lists like the no-fly list for years. The lists are maintained arbitrarily by executive agencies, with the rules governing the list left vague. The evidence justifying the addition of an individual is kept secret, and the process for getting removed is deliberately opaque. According to the American Civil Liberties Union, "as many as 35% of the nominations to the network of watch lists are outdated and tens of thousands of names were placed on lists without an adequate factual basis."

The due process afforded by the watch list procedures is woefully inadequate, and claiming otherwise is laughable. Federal courts have railed against the no-fly list in particular, with a court in Oregon ruling in June the list not only fell "far short of satisfying the requirements of due process," but that it was also both "unconstitutional" and "wholly ineffective."

Resorting to the no-fly list is not only politically lazy, it's actively counterproductive. Even if legislation prohibiting individuals on the no-fly list from purchasing firearms were to make it through Congress, it would almost immediately be struck down by the courts, and for good reason — while the right to fly is not constitutionally protected, the right to purchase firearms absolutely is. Whether Democrats want it to be true or not, restrictions on firearms require a far heavier constitutional burden to justify regulation.

Forcing through this policy proposal would be a Pyrrhic victory in the purest sense, giving the Obama administration a short-lived media win followed by a long tail of judicial rulings that would give the gun-loving right another example of the left trying to "take your guns" illegally.

Real, meaningful and effective alternatives exist. On Wednesday, the same day of the San Bernardino shooting, a group of doctors delivered a petition to Congress signed by more than 2,000 clinicians and scientists calling for lifting the prohibition on researching gun violence by the Centers for Disease Control and Prevention.

In October, the New York Times' Nick Kristof put forth numerous proposals with broad popular and scientific support focused on making guns safer, rather than banning them. Proposing simple changes like investing in smart gun technology and opening research on the impact of gun violence on public health, Kristof correctly argued that the United States must "take modest steps to reduce the carnage that leaves America resembling a battlefield."

After Sandy Hook, then-Newark Mayor and now Sen. Cory Booker (D-N.J.) made a case for "pragmatic and achievable gun law reform," such as instituting purchasing restrictions targeted at gun traffickers and appointing a permanent head to the Bureau of Alcohol Tobacco Firearms and Explosives.

Put simply, there is no shortage of good, pragmatic ideas consistently supported by a majority of both Republicans and Democrats. That's what makes the Democrats' decision to go for political optics and expediency over pragmatic and practical reform all the more incomprehensible.

Not helping: Democrats are setting gun control back when they should be pushing it forward. Democrats fancy themselves as the party of good government, but linking gun purchasing prohibitions to the no-fly list represents the opposite. By pursuing an unconstitutional, ill-informed and ineffective policy proposal for the sake of scoring political points during a campaign cycle, Democrats are ensuring that terrorists, extremists and other criminals will continue to have easy access to high-powered firearms for years to come.