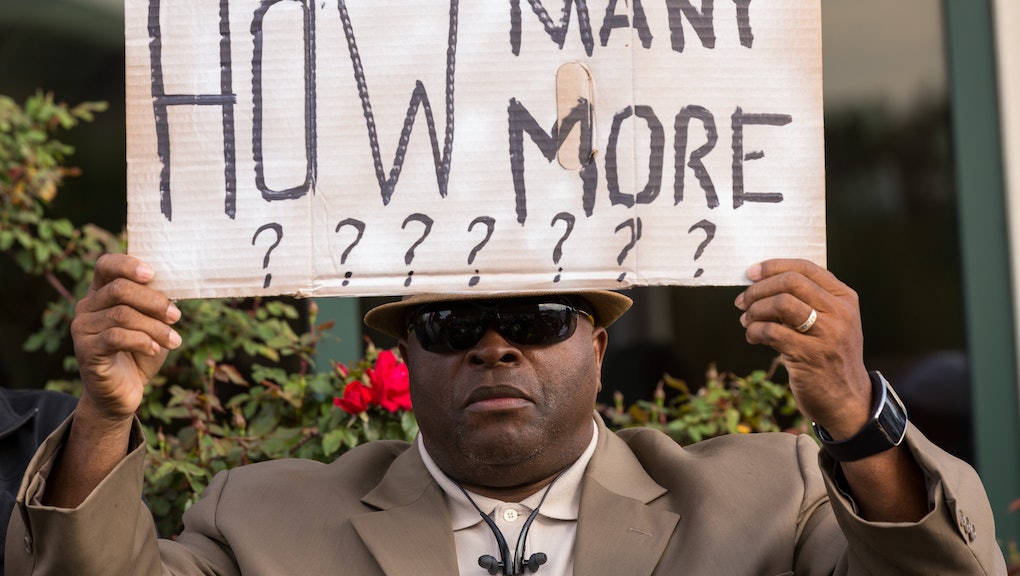 The year 2015 was marked by countless high-profile incidences of police brutality against minorities — Samuel Dubose in Ohio, Freddie Gray in Baltimore and Walter Scott in South Carolina, to name a few — that it's hard to keep track.

Recent events of police violence have spurred often highly charged protests, including those linked to activist group #BlackLivesMatter on Twitter, and riots in Baltimore. However, it's difficult to digest the true impact of police brutality without hard data. The federal government has no complete tracking or record system of how many civilians are killed by the police. Instead, the FBI runs a voluntary program that law enforcement organizations can choose to report to.

"We live in a time and space that dictates that if we can't prove it with data, then it didn't happen," Brittany Packnett, who is a part of President Barack Obama's Task Force on 21st Century Policing, told the Guardian. "And yet we know that people are continuing to suffer in these ways every single day, so we have to make sure we have the numbers to back up people's stories and that those numbers push police departments towards urgent action."

Here are some startling statistics on police brutality:

1.  In May, the Washington Post analyzed the 385 fatal police shootings in the United States that had occurred so far in 2015. The Post noted its number, which came out to two officer-involved shooting deaths per day, was more than twice the rate that the government had recorded over the past decade.

2. That same report found blacks to be killed at three times the rate of whites or other minorities.

3. It also found that almost a quarter of those killed were identified as mentally ill by police or family members.

4. The youngest victims at the end of May, according to the Washington Post, were 16 years old (though at the time, nine ages were unknown).

5. Another Washington Post investigation from August found that black men — who constitute 6% of the nation's population — account for 40% of the 60 unarmed people who had been fatally shot by police by that time.

6. The Guardian's The Counted project, which crowdsources and reports on police deaths, analyzed the first half of 2015 to find that an average of three people were killed daily during that time.

7. Mapping Police Violence found that black people living in Oklahoma were six times more likely to be killed by police than in Georgia.

8. It also found 98% of these events did not end with an officer being charged with a crime.

9. A 2014 article by KQED found California to be the state with the most frequent occurrences of deadly officer-involved shootings, with 102 in 2011.

10. The Guardian also found that if this trend persists, the number of people killed by police will surpass 1,000 by the end of the year.