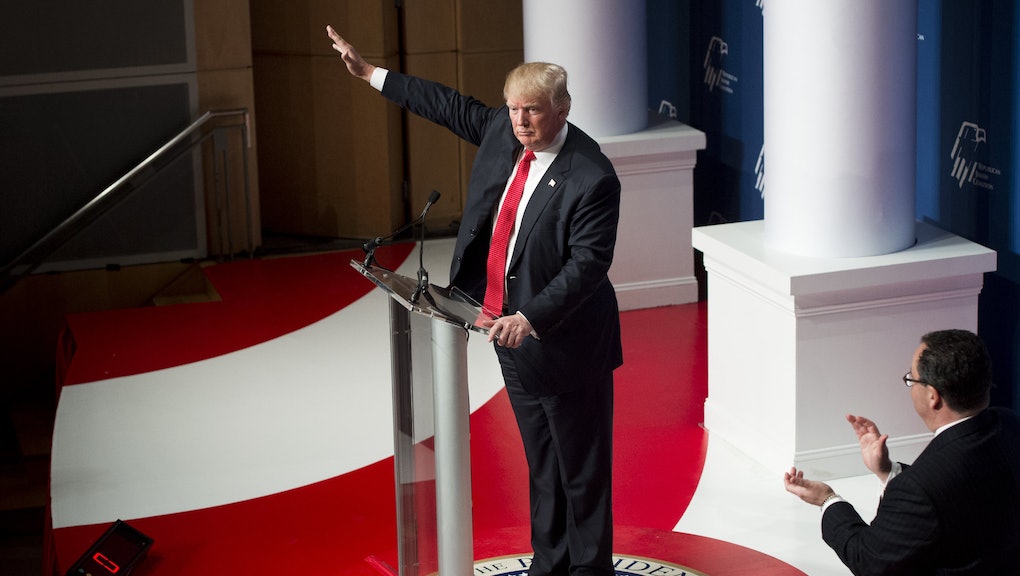 A petition calling to ban Republican presidential frontrunner Donald Trump from entering the United Kingdom went live on Tuesday after successfully completing a review by the British government. Trump, who has dominated most state and national polls since he announced his candidacy in June, has repeatedly roiled the race with explosive comments targeting an array of groups, among them Mexicans, women, veterans and Muslims.

"The U.K. has banned entry to many individuals for hate speech. The same principles should apply to everyone who wishes to enter the U.K.," the petition reads. "If the United Kingdom is to continue applying the 'unacceptable behaviour' criteria to those who wish to enter its borders, it must be fairly applied to the rich as well as poor, and the weak as well as powerful."

The campaign to for a Trumpless Britannia is spearheaded by American-born Irish citizen Suzanne Kelly. Kelly, a contributor to citizen journalism website Aberdeen Voice, has demonstrated against the billionaire in the past, and was one of his most outspoken critics during the construction of his Trump International Golf Links in Scotland.

"These are very inflammatory times that we're living in," Kelly told Mic. "The last thing that we need is somebody pouring fuel on a fire. What we need is more tolerance and more cultural understanding."

As of this writing, the petition has just surpassed its 10,000 threshold, which means the British government will be required to issue a response. If it reaches 100,000 — and odds are good as the petition is racking up handfuls of signatures by the literal second — the full parliament will officially consider the idea.

Kelly said she was especially optimistic about hitting the goal after Monday, when Trump proposed to ban Muslims from entering the United States. "After [that] particularly hateful speech, I think it's going to have an awful lot of backing."

His Monday proposal is only the latest in a series of outrages that have been mounting in their frequency and intensity since he first launched his presidential bid with a declaration that Mexican immigrants were rapists and drug dealers. In the wake of ISIS terrorist attacks in Paris and San Bernardino, California, Trump has called for increased surveillance of mosques, potentially requiring Muslim Americans to register with official government databases and, now, a ban on Muslims entering the United States. Trump has since clarified that the ban would not apply to travel by Muslim U.S. citizens.

With the Iowa caucus now just weeks away, the once-unthinkable prospect of a Trump nomination gains confidence every day.

"People jump on board [for] celebrities they see on television," said Kelly. "I do think he could win; this frightens me greatly."