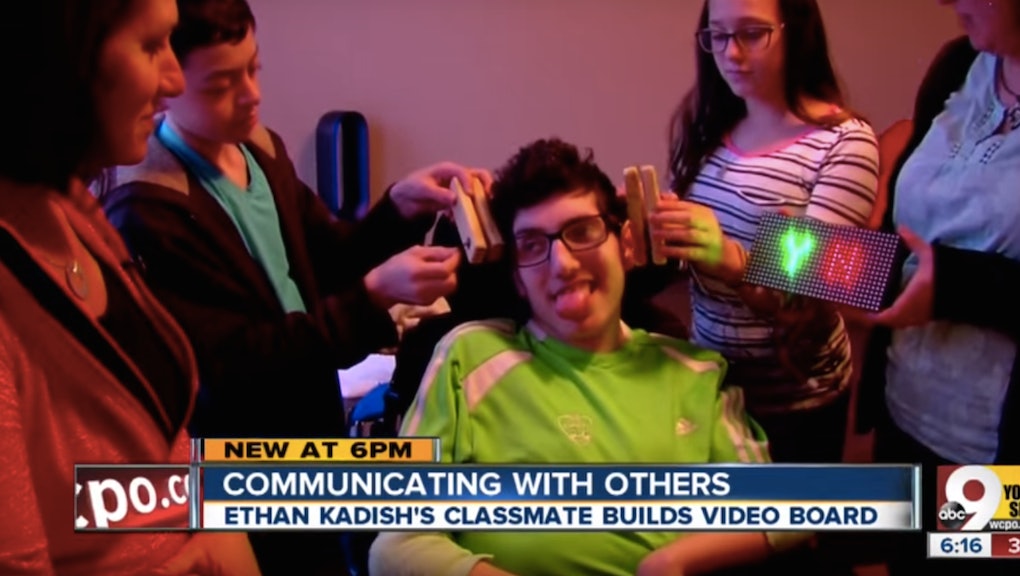 Loveland, Ohio, eighth-grader Ethan Kadish has had trouble communicating with family and friends ever since he was struck by lightning two years ago. That's exactly why Jacob Smilg, a friend and fellow classmate of Kadish's, created a simple device to help his peer.

Smilg built a message board which reveals a brightly lit response from Kadish, either "yes" or "no," depending on which way he shifts his head. His family told ABC 9 the gadget has had a profound impact on Kadish's life. "It changes things on such a fundamental level in terms of what we see he understands," his mother told the station.

In a video posted to YouTube by the local ABC affiliate channel, Kadish can be seen being asked whether he wants to watch Star Wars. He uses the message board Smilg created to reply "yes" while smiling, causing his family to burst into laughter.

The progress Smilg's message board has made in Kadish's recovery is remarkable, but the eighth-grader says he's not yet done helping his friend.

"His mom, Alexia, said it was the most he communicated in a year and a half," Smilg said in the video, while working on the components to the gadget. Smilg then theorized what could be possible if he could eventually move "some other part of his body [that he could move] to press a button," saying, "we could make a really simplified keyboard, where it would have a lot less buttons but still able to function."