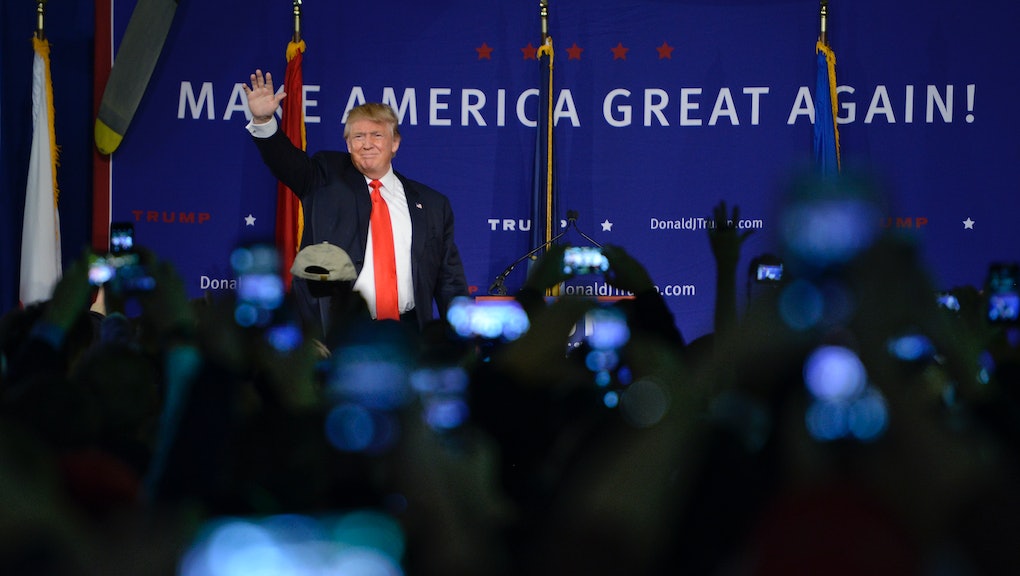 That's right: Propelled to the White House by a 537-vote margin over Vice President Al Gore in Florida, then-Texas Gov. Bush trounced Gore among Muslim voters in the state; up to 90% of Florida's 60,000 Muslim voters backed Bush. Nationally, according to an unscientific exit poll conducted by the Council on American-Islamic Relations, Bush bested Gore with 78% of the Muslim vote, seemingly heralding what Middle East Quarterly in 2001 called "a marked shift to the Republicans."

From the vantage of the 2016 presidential race, such figures would seem to be emanating from a parallel universe. With Republican presidential front-runner Donald Trump advocating a "total and complete ban" on Muslims coming into the United States — after embracing a registry of every Muslim in the country and proposals from fellow GOP candidates Sen. Ted Cruz (R-Texas) and Jeb Bush to allow only Christian refugees from the Middle East to come to the U.S. — GOP relations with the Muslim community are at an historically low ebb.

It remains to be seen whether Trump's draconian new proposal will mark the moment his campaign began its ultimate descent or if his latest appeal to base fears will only boost his standing in the polls. If past is prologue, it's likely to be the latter.

This much is clear: The political landscape surrounding Islam has been drastically reshaped since the dawn of the new millennium, with far-reaching consequences.

Well before the the boastful billionaire leading the GOP polls stoked a new wave of anti-Muslim sentiment, Muslims soured on the party. A 2011 Pew Research Center survey found that only 11% of American Muslims identified with the Republican Party, compared with 70% who considered themselves Democrats and 19% who were independent.

Winning the Muslim vote: Bush's victory in 2000 proved to be the modern apex of Muslim support for the GOP. While his administration's policies would soon prompt Muslims to flee the party in droves, Bush's Republican Party seemed a natural fit for many Muslims at the turn of the century.

For starters, the GOP's fundamental conservatism on hot-button cultural issues like abortion and gay rights matched the views of many Muslim voters.

"Islam is a relatively conservative religion," Karam Dana, director of the American Muslim Research Institute and an assistant professor of Middle East politics at the University of Washington-Bothell, told Mic. At the turn of the century, Muslim voters "found the socially conservative agenda within the Republican Party to be salient in terms of how they view themselves."

Moreover, Dana explained, most American Muslims are "very capitalist" in their economic outlook, with many owning small businesses and occupying top professions. As political scientists Matt A. Barreto and Dino Bozonelos noted in the journal Politics and Religion in 2009, American Muslims complete college and own small businesses at higher rates and earn higher median incomes than the typical American, all of which make someone more likely than not to vote Republican.

Recognizing a sympathetic constituency and eager to establish credentials as a "compassionate conservative" willing to reach beyond the GOP's predominantly white base, Bush made a hard play for the Muslim vote in 2000. He met with Islamic community leaders and pledged during an October debate that he'd pursue a "wholesale effort against racial profiling" targeting Arab-Americans. Later that month, Bush won the endorsement of the American Muslim Political Coordinating Council, a group founded to combat profiling and oppose efforts to make Jerusalem the undivided capital of Israel. The council lauded Bush's anti-profiling stance and his concerted outreach efforts in announcing its choice.

A new political reality: Less than eight months after Bush took office, the Sept. 11, 2001 terrorist attacks changed the trajectory of his presidency — and the Muslim vote.

In the days after the attacks, Muslims found much to applaud in Bush's response. Flanked by Muslim leaders, Bush appeared at the Islamic Center of Washington, D.C. just six days after the attacks, declaring, "The face of terror is not the true faith of Islam. That's not what Islam is all about. Islam is peace. These terrorists don't represent peace. They represent evil and war."

Robert McCaw, manager of government affairs at the Council on American-Islamic Relations, told Mic that Bush's speech "set the tone" for the GOP in the aftermath of the attacks, but Bush wasn't able to sustain the good will for long.

The Patriot Act, signed into law in October 2001, paved the way for increased surveillance of Muslim communities, drawing the ire of advocates who said the measures deprived Arab and Muslim Americans of due process and fostered a default policy of official suspicion toward members of Muslim communities.

What's more, Dana said, the Bush administration sparked a significant backlash with its foreign policy adventurism, most notably with the war in Iraq.

Rallying public support for the war on terror, Bush started espousing rhetoric that alienated Muslims both domestically and internationally. The same week he visited the Washington mosque, Bush proclaimed,

Moreover, as Steve Kornacki observed in Salon in 2010, the 9/11 attacks generated outbursts of Islamophobia from prominent conservative Republicans — including televangelist Pat Robertson, who tarred Muslims as "worse than Hitler," and Bush appointee Daniel Pipes, who identified "the presence, and increased stature, and affluence, and enfranchisement of American Muslims" as a pressing public policy problem.

By the time Bush faced voters again in 2004, Muslims had largely abandoned his party. CAIR's exit poll from that year's election found that 93% of Muslims voted for Bush's Democratic opponent, then-Sen. John Kerry of Massachusetts, with 5% voting for independent Ralph Nader and only 1% backing Bush. For the incumbent president, it marked an astonishing 77-percentage-point decline in support from his 2000 performance.

Post-Bush years: The presidency of Bush's successor has witnessed a further diminishment in the GOP's standing with Muslims. Bearing an Islamic name and a cosmopolitan sensibility unfamiliar to many American voters, President Barack Obama gave rise to renewed anxieties about identity and belonging. Bringing these deep-seated anxieties to the boisterous surface of American politics often came at the expense of Muslims.

To a substantial portion of the GOP electorate — egged on by figures like Trump — the president was an alien usurper, born not in Hawaii but in Kenya. (Or was it Indonesia?) He was also, many Republicans still believe, not a Christian but a Muslim; a CNN poll released in September found that 43% of GOPers still subscribe to this falsehood.

Fanning fears of creeping Islamism, conservatives in the Obama years have passed legislation banning the use of Islamic, or sharia, law and raised the specter of so-called "no-go zones," Muslim-dominated areas, mostly in Europe, where police allegedly dare not tread. Trump revived the no-go zone myth this week, asserting, "They have sections in Paris that are radicalized where the police refuse to go there. They're petrified. The police refuse to go in there. We have places in London and other places that are so radicalized that the police are afraid for their own lives."

"What we've seen is the Republican Party itself has a adopted a position of 'otherizing' Muslims and treating them through a securitizied lens," CAIR's Robert McCaw said. "We haven't seen such a thing coming from the Democratic Party."

"That doesn't necessarily mean the GOP — in terms of its principles and its backing and its core belief system — is one that supports [bigotry and violence]," he told Mic. "But it's quite unfortunate to see that hate speech is tolerated and racial profiling that might translate into violence is being talked about and debated among the leading Republican candidates for president."

Where does the party go from here? The Trump phenomenon didn't emerge from thin air. With three in four Republicans saying that Islam is at odds with American values and a substantial minority of GOP voters ready to criminalize the entire religion, Trump knows his audience — notably, older white voters in early-voting states like Iowa, who've expressed fears about the Islamization of the West.

Other GOP candidates are clamoring for it. Ben Carson has declared that Muslims are inherently unqualified to serve as president. One day before Trump championed a sweeping ban on any Muslims entering the U.S., Sen. Marco Rubio (R-Fla.) appeared on Fox News to ask, "Where is there widespread evidence that we have a problem in America with discrimination against Muslims?" Ted Cruz, after noting Monday that Trump's Muslim ban was "not my policy," was careful to add Tuesday, "I commend Donald Trump for standing up and focusing America's attention on the need to secure our borders."

Given the prevailing attitudes within their party, Republicans are unlikely to abandon such rhetoric soon. But Dana says it's come at a steep cost.