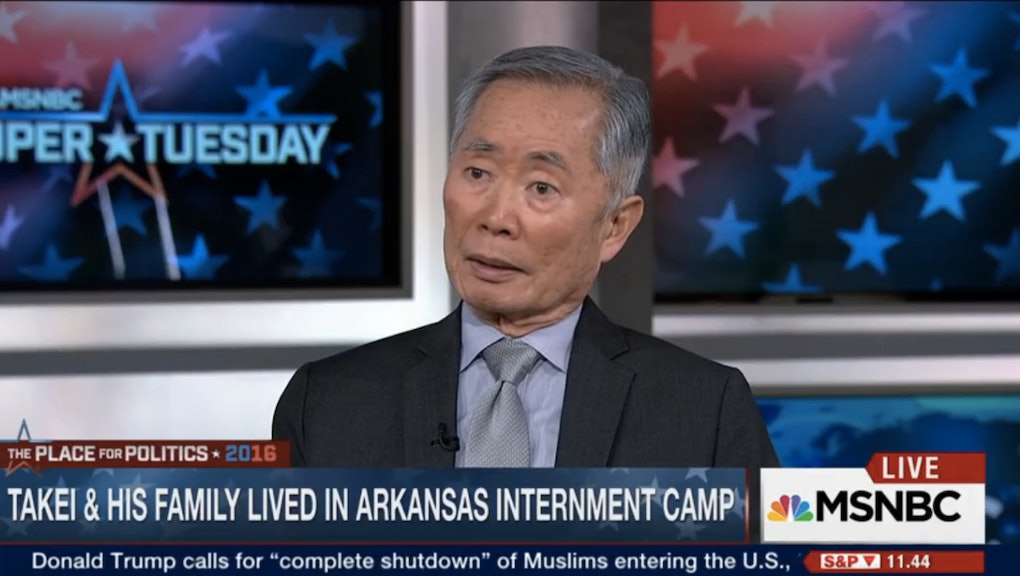 George Takei, the septuagenarian actor best-known for playing Mr. Sulu in the original Star Trek TV series and his popularization of the phrase "Oh, my," appeared on MSNBC Tuesday to denounce Donald Trump and his most recent plan to ban all Muslims from entering the United States in the wake of ISIS terrorist attacks in Paris and San Bernardino, California.

"What Donald Trump is talking about is something that's going to make his logo 'America disgraced again,'" Takei told interviewer Thomas Roberts. Takei has firsthand experience with one of the worst instances of U.S.-sanctioned racism, having been one of the 100,000-plus Japanese-Americans forced into internment camps during World War II.

Trump has made justification for using Franklin Roosevelt's policy as inspiration of sorts for handling what he sees as a danger posed by Muslims in America. "It's all over again," said Takei. "We don't know our history and when we don't know that, then we don't learn the lesson from our history."

Takei, who in an instance of good timing just made his Broadway debut in Allegiance, a musical about the internment camps, told Roberts that one of the major factors leading to the forced relocation of Japanese-Americans was a failure of political leadership. "[Political leaders] could not educate the hysteria that was sweeping across this country," he said. "Get rid of the Japs was the most popular political issue of the time."

The Japanese-American internment has been widely denounced by historians, and, in 1988, Ronald Reagan apologized for the internment. The government ordered $20,000 in reparations to every surviving member of the camp.

Ironically, the internment program was never legally struck down. The Supreme Court's 1944 decision in Korematsu v. United States expressly maintained that the policy was consitutional. Writing for the 6-3 majority, Justice Hugo Black wrote that Fred Korematsu's individual liberty was outweighed by "the power of the government to take steps necessary to prevent espionage and sabotage in an area threatened by Japanese attack." As the New York Times pointed out in an editorial, the decision "has never been judicially reversed."

The ever-increasing level of Trump inspired controversy has led to at least one major presidential candidate calling him a fascist, while CNN's Chris Cuomo asked him directly if he was.