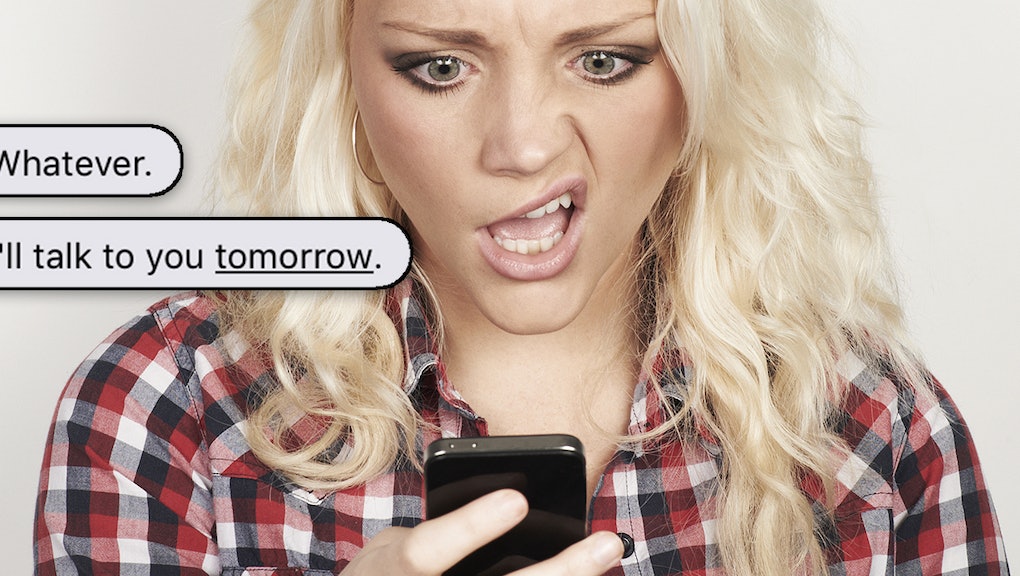 Yes. A Study Shows That Ending Your Texts With a Period Makes You Sound Like an Asshole.

Prepare for vindication, texters, because a new study has confirmed what you already knew: Ending a text message with a period is very bad textiquette and makes you look like a jerk.

Mobile technology has changed the meaning of the full stop in casual online conversation. "Give me a call" can sound very different from, well, "Give me a call." The former is chill; the latter is more stern and severe. Emphasizing those complete sentences, like your English teacher taught you, only makes you sound angry.

The study comes from researchers at Binghamton University in Binghamton, New York, and was recently published in the journal Computers in Human Behavior.

In it, 126 undergraduate students were presented with short exchanges — including both text messages and handwritten notes — that featured responses that either ended with a period or ended with no punctuation. The undergraduates reported that text message responses ending in periods were "less sincere" than those that did not. Interestingly, participants didn't feel the same way about handwritten notes.

"We conclude that punctuation is one cue used by senders, and understood by receivers, to convey pragmatic and social information," the researchers wrote.

"Pragmatic and social information" is important in this case because it helps us figure out the context, rules and parameters in a given interaction. As lead researcher Celia Klin noted in a statement, text messages lack the traditional cues of face-to-face interactions — eye contact, facial changes, tone of voice — and things like punctation have begun to replace them.

"It makes sense that texters rely on what they have available to them — emoticons, deliberate misspellings that mimic speech sounds and, according to our data, punctuation," she said.

Previous studies have also linked the use of a period to aggression. As Mark Liberman, a professor of linguistics at the University of Pennsylvania, told the New Republic in 2013, "Choosing to add a period also adds meaning because the reader(s) need to figure out why you did it. And what they infer, plausibly enough, is something like, 'This is final, this is the end of the discussion or at least the end of what I have to contribute to it.'"

Above all, Klin and her team's findings are a testament to the value we place on real communication. Despite the limitations of screen-to-screen interactions, we've still managed to find ways to work within them. Things that at one time wouldn't have meant anything — like periods — now carry an entirely different weight.

But the matter, thankfully, appears to be decided: Don't end your damn text messages with a period. And may God come down and smite you if you end them with "k."