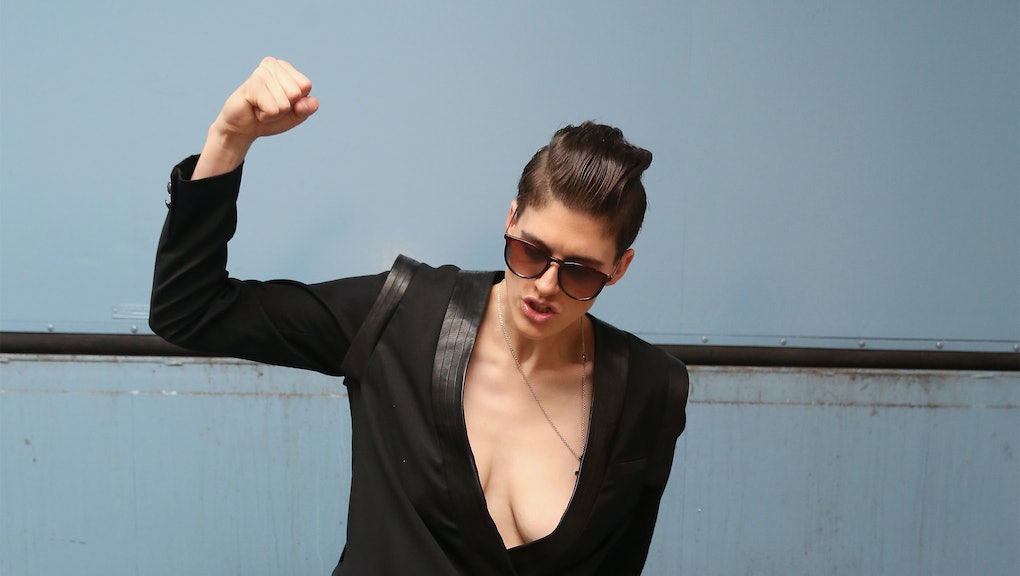 Whether or not you watched the annual Victoria's Secret Fashion Show on Tuesday doesn't matter. Chances are you're familiar with the brand — the veteran "Angels" like Adriana Lima and Alessandra Ambrossio, the newcomers like Kendall Jenner and Gigi Hadid and the look:

That luscious-haired, long-limbed and perky-boobed look is the epitome of traditional femininity. It's a beauty standard that's all too narrow for most people to fit, nor should they need to — which is the case one androgynous model is making with some lingerie photos of her own.

On the eve of the annual Victoria's Secret Fashion Show, Rain Dove, a 26-year-old model who's captured the industry's attention for her androgynous look, began posting side-by-side photos on her Instagram account of herself in sexy, Victoria's Secret-style lingerie. On the one side is Dove in all of her gender-nonconforming beauty; on the other, the face of a Victoria's Secret model pasted over her own.

"During my career path I've experienced firsthand what people deem as beautiful," Rain Dove said in a press statement. "It's not me. It's not most people. It's limited and small. It needs to change."

Since Dove's facial features aren't what society deems feminine, she's often rejected in the fashion industry as a female model, she told Mic via email. Indeed, Dove is one of the few, notable androgynous models to walk in fashion shows for men's clothing as well as women's.

So she decided to create a sarcastic series of photos to show the industry "what it wished it could get from me as a model," she told Mic.

"The goal was to create a dialogue about human culture and the way we see beauty."

The contrasting images (which have since been removed from Dove's account but were shared with Mic) are a message to Victoria's Secret to expand its definition of female beauty, Dove said. The Angels are part of a widely-known and culturally accepted beauty ideal that is ultra-feminine and sexy, which can be harmful to shoppers who can't envision themselves looking the same.

"The first thing you put on in the morning is your lingerie, and you have to look at yourself and tell yourself that you're beautiful, and that's really hard to do when even a simple catalog can't confirm that you're wearing something appropriately or look good enough," Dove told People.

Dove emphasized that she intends to critique body image standards, not particular models. Victoria's Secret is a powerful brand, filled with great outfits, models and an upbeat attitude, Dove told Mic. But they could be better if they featured more diversity.

"Victoria's Secret is entitled to brand themselves the way they want to," Dove said. "[But] they have so much power to do good with their company simply by being more diverse."

For her part, Dove said her goal isn't to be a Victoria's Secret model. Instead, her goal is to be "a mouthpiece and canvas for the possibilities of a more open future," she told Mic.

Yet that doesn't mean she'd rule out the opportunity to walk the runway for them.

"If they offered I would gladly accept. But that's only if they are ok with embracing my entire identity commercially," Dove told Mic. "That means my sexuality, love of suits, and desire to keep my hair short, muscles."