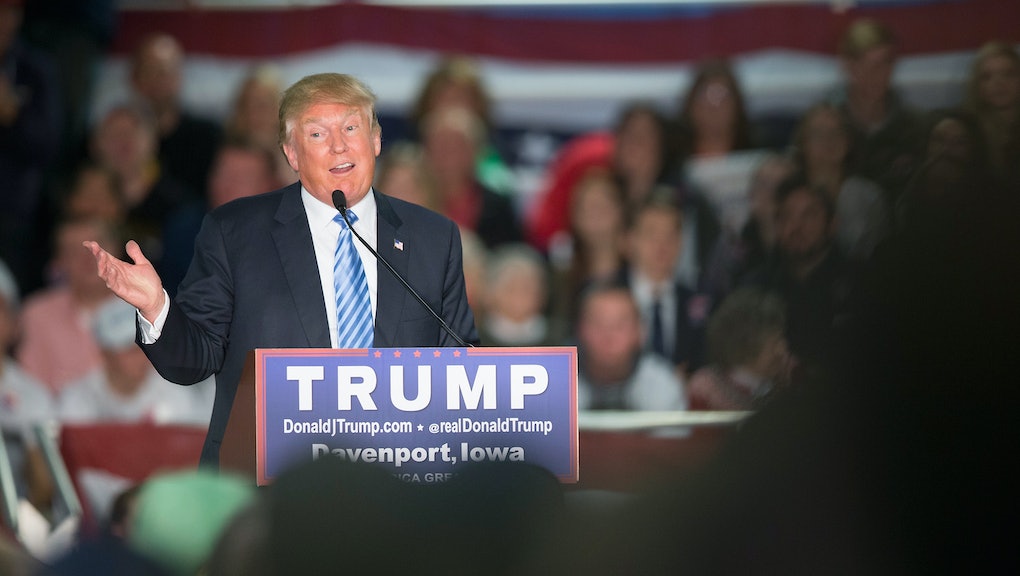 Every now and again, current events grant newfound relevance to 140-character missives that the billionaire Republican presidential front-runner fired off months or years ago. (This is why you see old Trump tweets — of which there are plenty to choose from — pop up in your Twitter feed over and over again.)

The following tweet, sent by Trump earlier this year, serves as an excellent contrast to his recently adopted persona of Islamophobic demagogue:

Trump sent that tweet on May 4, the day after two men opened fire at a contest in Garland, Texas, where a contest was being held for cartoons of the prophet Muhammad.

Depictions of Muhammad are prohibited under Islam. The event was organized by Pamela Geller, a conservative activist and blogger with a long history of provocative anti-Islam stunts. The gunmen both carried assault rifles and were shot and killed by police almost immediately after opening fire. One of the men reportedly tweeted references to the Islamic State militant group, also known as ISIS, immediately before the attack began.

At the time, the attackers were widely condemned — as was Geller, whom critics said unnecessarily provoked the attack. Geller claimed she and the contest participants were merely exercising their First Amendment rights to free speech. Trump was among those who criticized the gathering, tweeting this shortly before the message above:

The new Trump: Trump's sentiments in May were entirely reasonable, unlike his most recent comments about Muslims and extremism.

Since the Paris attacks last month and the San Bernardino shooting last week, Trump — the consummate "publicity seeker" — has played on Americans' fears of terrorism to condemn an entire religion with more than 1 billion worldwide adherents.

In November, Trump entertained the idea of a national database of all Muslims in the United States, including American citizens. This week he proposed a blanket ban on all Muslims entering the U.S. (which he later clarified would not apply to Americans traveling overseas).

It's tempting to write Trump's bluster off as just another escalation of the type of speech he has employed to great effect so far in the Republican presidential campaign. But there are signs that his anti-Islam policy proposals could have real, tangible effects, putting American lives at risk and fueling ISIS recruiting efforts. Republican Sen. Lindsey Graham of South Carolina, himself a presidential contender, explicitly made this point on Monday, tweeting that Trump is "putting at risk the lives of interpreters, American supporters, diplomats and the troops in the region by making these bigoted comments."

If only the Donald Trump of last May could speak to the Donald Trump who's now the leading candidate for the Republican presidential nomination, the latter might realize that he is, wittingly or not, "openly mocking religion to provoke attacks and death."