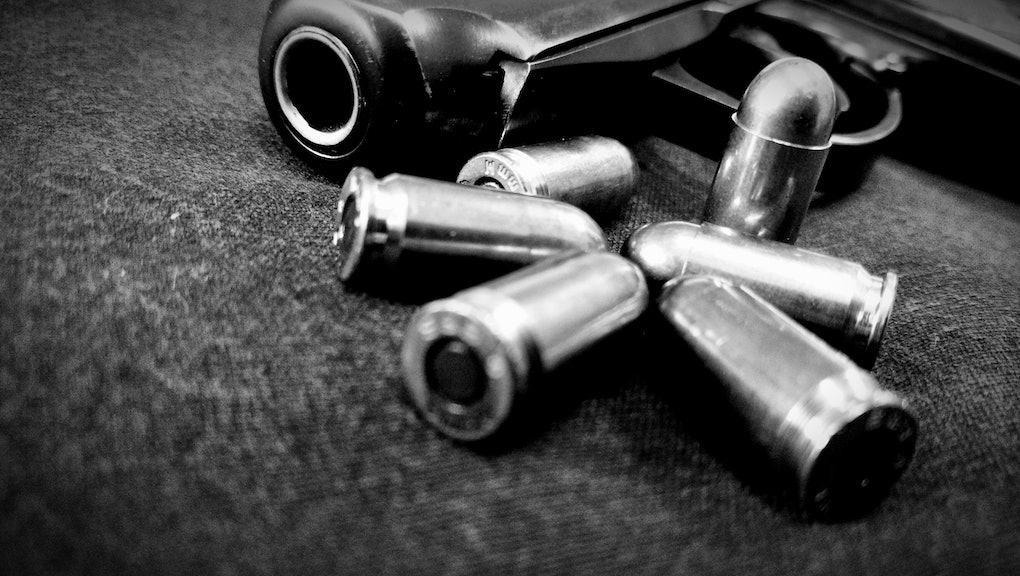 A device that controls severe bleeding from gunshot wounds in seconds has just received Food and Drug Administration approval for use in civilians.

The product, XStat 30, is a syringe-like applicator that injects a cluster of small, superabsorbent sponges into an open wound. Within 20 seconds of contact with blood, the sponges expand to fill the cavity and temporarily halt blood flow, according to the website of RevMedx, the Oregon-based company behind XStat 30. The sponges contain X-ray-detectable markers so they can be located once a patient reaches the hospital.

XStat 30 was first funded through a grant from the U.S. Army to develop a solution to address junctional hemorrhaging: severe traumatic bleeding in parts of the body where you can't use a tourniquet, such as the groin or shoulder areas. In April 2014, it was granted FDA approval for military use on the battlefield.

At the time, Christy Foreman, then the director of the Office of Device Evaluation at the FDA's Center for Devices and Radiological Health, called it "an important new treatment option for our nation's military to treat injured soldiers who may not be in close proximity to a medical facility."

Now, as of Dec 7, XStat 30 is FDA-approved for use in adults and adolescents in the civilian population. That means XStat 30 has the FDA's stamp of approval for use by trained first responders at, say, the scenes of shootings.

When the military develops medical solutions, "there's always eye toward how could this help the greater population in the future," Will Fox, RevMedx's vice president of sales and marketing, told Mic.

"When a product is developed for use in the battlefield, it is generally intended to work in a worst-case scenario where advanced care might not be immediately available," Dr. William Maisel, acting director of the Office of Device Evaluation in the FDA's Center for Devices and Radiological Health, said in the FDA's Dec. 7 release. "It is exciting to see this technology transition to help civilian-first responders control some severe, life-threatening bleeding while on the trauma scene."

A video provided to Mic shows XStat being tested on a (very bloody) dummy.

XStat isn't the only product that can rapidly halt bleeding from a gunshot wound. Another is QuikClot, an FDA-approved hemostatic dressing that contains kaolin, a mineral known to promote clotting.

In 2008, after undergoing military testing, QuikClot announced it was selected by the U.S. Department of Defense "for all military services as the first-line hemostatic treatment for life-threatening hemorrhage that is not amenable to tourniquet placement." In 2009, QuikClot was adopted by the NYPD's Emergency Services Unit, and is also used by law enforcement in Houston, Boston, Cleveland and Chicago.

XStat has various limitations on how and where on the body it can be used, which is why QuikClot doesn't see it as a direct competitor.

"XStat is a junctional hemorrhage device with very specific and limited indications for use," Z-Medica, the company that makes QuikClot, said in a statement provided to Mic. "QuikClot is versatile and can be used in multiple locations of the body, with or without the aid of a tourniquet."

Hemostatic devices such as XStat and QuikClot can make a very real difference between life and death. Hemorrhaging is responsible for 30% to 40% of civilian trauma deaths, according to a United States Army Institute of Surgical Research study referenced in the Dec. 7 FDA release. Of those deaths caused by hemorrhaging, 33% to 56% happen before the patient makes it to a hospital.

"We believe that part of the reason for that is the lack of availablity of products that can stop the bleeding properly or quickly," Fox said. "We probably have gotten an inquiry once or twice a week, where a police officer or first responder has told us story about somebody they worked with, or a civilian, that died from severe bleeding from a wound they couldn't put a tourniquet on."

As of today, gun violence has caused 12,474 deaths and 25,158 injuries so far this year in the U.S., according to the Gun Violence Archive.

Given those statistics, Mic asked QuikClot if it was crazy to suggest that civilians their own hemostatic devices.

"Not crazy at all," Z-Medica said. "The paradigm has shifted from a 'see something, say something' to 'see something, do something.'" The company is even working with state and federal programs to make QuikClot available in public places such schools, airports and train stations, "much the same way that AEDs are available to help victims of heart attacks," the company said.

And though XStat 30, because it's an injectable, is not currently available over-the-counter, Fox said about half of RevMedx's XStat 30-related inquiries come from civilians looking to buy the device for themselves.

"When we first got approval, we received a ton of interest from people who are everyday, non-physicans," Fox said. "[They're] just concerned about having something in case something bad happens."

Eventually, though it'll require a lot more testing, RevMedx hopes to make a version of XStat that ordinary civilians can use on themselves. "That's our vision and goal," Fox said.