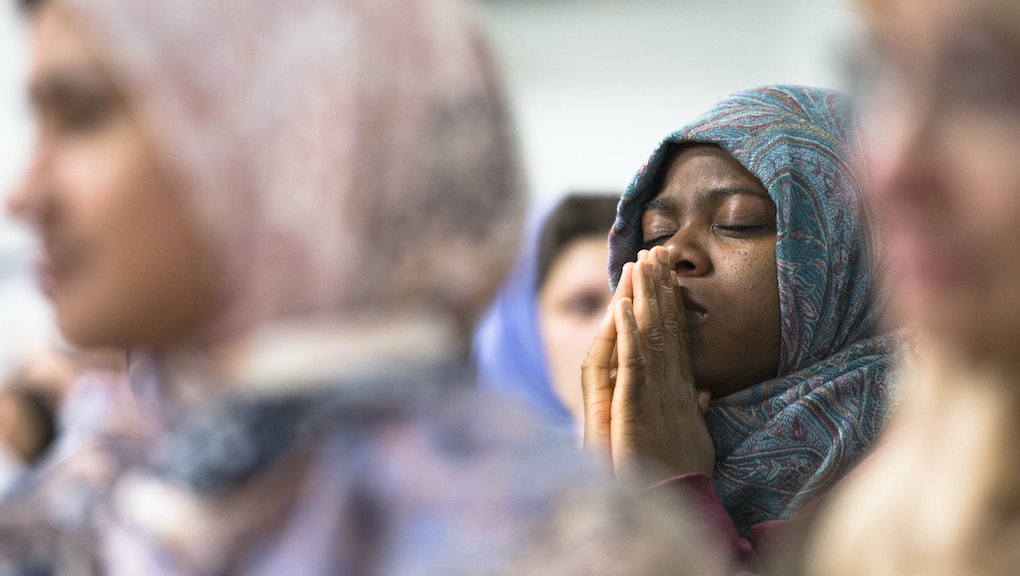 After officials identified San Bernardino, California, shooters Syed Rizwan Farook and Tashfeen Malik, Donald Trump was quick to lump these violent extremists with all Muslims. "You have people that have to be tracked. If they're Muslims, they're Muslims," he said Monday. Taking a stance even his fellow GOP candidates have maligned, Trump went on to call for the "total and complete shutdown" of Muslim immigration into the United States.

Though statements like Trump's encourage harmful misconceptions about Islam and the 1.6 billion people who practice its teachings, Muslims continue to show the world they can't be reduced to a stereotype. Here are 10 more powerful demonstrations of Muslims shattering hateful preconceptions.

1. They've raised — and are still raising — a ton of money for the families of the San Bernardino victims...

Pomona-based neurologist Faisal Qazi and his nonprofit MiNDS raised more than $170,000 — and counting — setting a record for the fastest-growing fundraiser on LaunchGood, a crowdfunding platform dedicated to helping "incredible Muslims worldwide."

On Sunday, the Islamic Community Center of Redlands held an interfaith memorial service dedicated to the 14 killed in the massacre.

3. Despite the unfair burden put upon them to prove that Islam is an inherently peaceful faith, Muslims of all factions continue to unite against terrorism.

On Sunday, a Shiite religious gathering near the White House in Washington, D.C., turned into an anti-terrorism rally when they were joined by Muslims of all factions.

4. A number of Muslim groups are taking official stances against terrorism...

The Muslim Reform Movement met Friday in Washington, D.C., to publicly denounce the "ideology of violent Islamic extremism," according to the Washington Times. In their Change.org declaration, the group wrote, "We reject interpretations of Islam that call for any violence, social injustice and politicized Islam. Facing the threat of terrorism, intolerance and social injustice in the name of Islam, we have reflected on how we can transform our communities based on three principles: peace, human rights and secular governance." Over 1,300 people have signed the petition.

5. ...and others are decrying terrorism through art.

Muslim filmmakers in Winnipeg, Manitoba, produced short film Letter to a Terrorist, in which a woman illuminates the consequences of seeing terrorists as representative of all Muslims: "People hate me because they hear my name and they see you. They see my face and they see you. But I am not you!"

To combat this misconception, Author and national spokesperson for the Ahmadiyya Muslim Community Qasim Rashid outlined "3 Qur'anic Verses That Prove ISIS is Un-Islamic," and history scholar Juan Cole compiled this list of Quranic teachings and Islamic tradition that forbid terrorism. Meanwhile, Imam Mohamed Magid told NPR he uses religion to disrupt misinterpretations of Islam: "If a young man walks into my mosque and has an ideology about Islam that is distorted, my responsibility as an imam, I try to correct his idea."

7. No, Muslims do not blindly follow one leader or another — that includes President Barack Obama.

Palestinian-American activist Linda Sarsour called out  Obama after he requested American Muslims to help "root out" extremism. Sarsour told MSNBC, "I'm tired of this idea that extremism can only mean Muslims or Islam or people who are associated with Islam. Extremism comes in all forms and we've seen that, but why is it that we're only obsessed with Islam and Muslim communities? ... 40% of plots that have been foiled in this country, have been disrupted by Muslims."

8. Even an American doctor raised in Texas and once voted "nicest person" by his senior class will be detained for his faith.

Bilal Rana, who also heads up a campaign called "Stop the CrISIS," spoke out in an opinion piece about being detained on a domestic flight after fellow fliers saw him "as a threat." "I'm not your enemy," Rana wrote. "I'm your biggest ally."

In a Wednesday AMA on Reddit, Rana explained his calm demeanor during the incident, and measured, thoughtful response afterward. "I understand that profiling and surveillance is necessarily," he posted in response to a Redditor's question. "All Muslims, in fact, should exude patience and be nothing but cooperative. Authorities should [balance] this with a sense of respect for the dignity of the Muslims whom they profile and surveil. Every human has their dignity."

9. Many have shown they can take Trump's hateful remarks in stride...

On social media, many Muslims have taken the "If you don't laugh, you'll cry" approach to the GOP presidential front-runner's bigotry, in a series of witty tweets.

Alas, the Donald has never been one for retracting a statement, or issue an apology, so don't hold your breath. But spread the word: There is no one definition for what it means to be a Muslim.