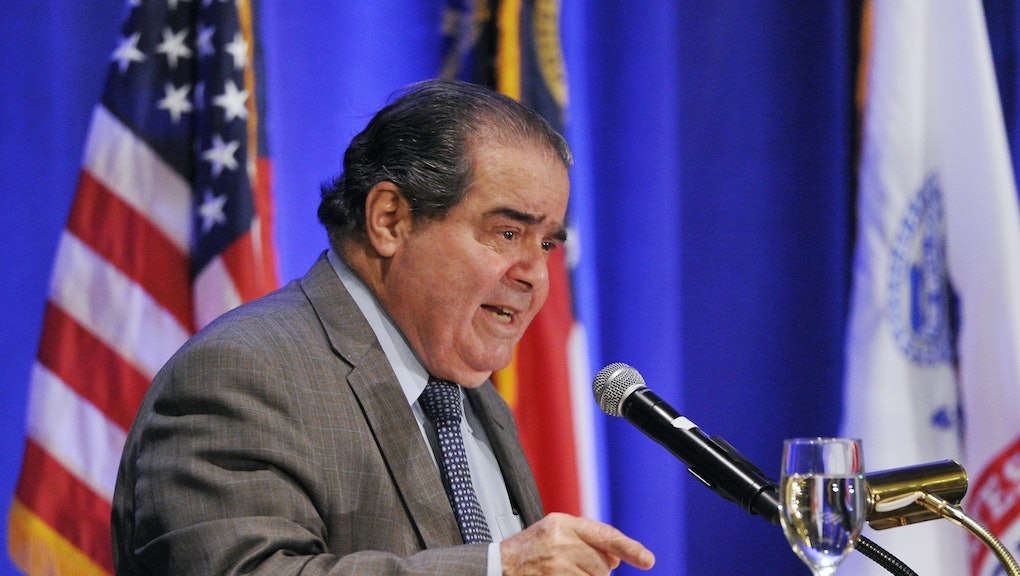 Supreme Court Justice Antonin Scalia has made his skepticism of affirmative action clear. "It has come to this," he said in his dissent of the high court's decision to uphold affirmative action in 2003. But his opinion on the matter reached an offensive register on Wednesday during oral arguments in a case questioning the University of Texas at Austin's affirmative action policy.

"There are those who contend that it does not benefit African-Americans to — to get them into the University of Texas where they do not do well, as opposed to having them go to a less-advanced school, a less — a slower track school where they do well," Scalia said. One of the briefs in the case, he continued, indicated that "most of the black scientists in this country don't come from schools like the University of Texas" but from "lesser schools" where they aren't placed in classes that are "too fast for them."

The case, Fisher v. University of Texas, was brought to the court by Abigail Fisher, a white woman who was not admitted to the university and is arguing that its affirmative action policy is unconstitutional. The policy in question means the university automatically accepts Texas high school students in the top 10% of their class, who constitute about 75% of the university student body, according to Talking Points Memo. The other quarter are accepted through a "holistic" process — a process in which the applicant's race can be considered as a factor for admission. Fisher is challenging the legality of that process, as she was not in the top 10% of her class, according to the same report.

It's the first case addressing affirmative action since the 2003's Grutter v. Bollinger, in which the court ruled that universities could take race into account in the admissions process to ensure diversity, but could not use a point system to increase minority enrollment, according to the New York Times. This legislation was only narrowly upheld by a 5 to 4 vote. Fisher — a re-examination of the previously disputed constitutionality of University of Texas at Austin's admissions plan — served as an ominous sign affirmative action's future to many.

Scalia's view is also notably at odds with most Americans, who see affirmative action programs as a "good thing" at a rate of 2-to-1, according to the Pew Center for Research. Americans' support for these policies likely derives from acknowledging the reality that minorities disproportionately face obstacles when it comes to attending college, including educational disparities, economic barriers and beyond.

The numbers back this up. While about 70% of white high school graduates enroll in college, only 65% of black graduates do, according to FiveThirtyEight. The minorities who do attend college still face inequality. For example, college-educated, African-American women still annually earn $19,054 less than their college-educated white, male counterparts, according to the Leadership Conference on Civil and Human Rights.