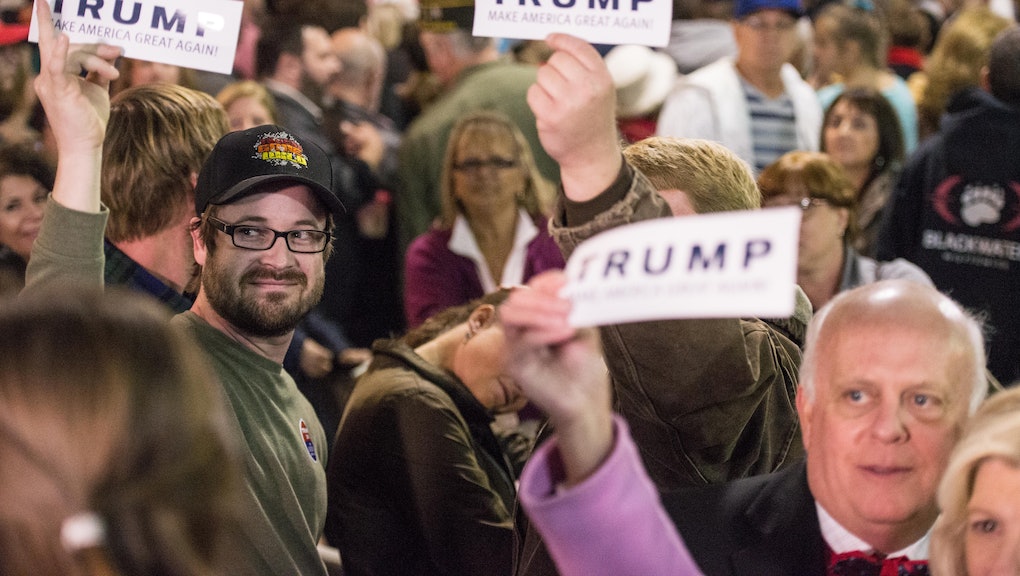 Nearly two-thirds of likely Republican primary voters agree with a proposal from billionaire presidential front-runner Donald Trump to ban Muslims from entering the United States, according to a Bloomberg Politics/Purple Strategies PulsePoll. One in three respondents said that the candidate's controversial position makes them even more likely to vote for him.

The survey, conducted the day after Trump's campaign released a statement calling for a "total and complete shutdown" of immigration by Muslims into the U.S. "until our country's representatives can figure out what is going on," shows that 37% of all likely general election voters, including Democrats and independents, support the measure. Nearly one in five general election voters — 18% — said the blanket ban on Muslim immigrants makes them more likely to vote for Trump, with 33% indicating that the plan makes them less likely to back him.

"We believe these numbers are made up of some people who are truly expressing religious bigotry and others who are fearful about terrorism and are willing to do anything they think might make us safer," Doug Usher, head of Purple Strategies, writes in his summary of the survey's results. "This indicates that, despite some conventional wisdom expressed in the last 48 hours, this is unlikely to hurt Trump at least in the primary campaign."

The survey's results found that opinions on Trump's proposal were functionally inflexible, even after voters were told by the poll's questioners that "leaders from across the political spectrum have condemned this policy." When told that leaders say the policy would make the U.S. "less safe by alienating the allies we need to fight ISIS," 64% of likely Republican primary voters indicated that they favored the proposal, including 52% who do so strongly.

Opinions are firming up: These attitudes didn't appear out of nowhere. Coming on the heels of a nationwide torrent of condemnations and criticisms, the results of the survey — conducted online with 605 participants, an admittedly limited sample — are in keeping with both the increasingly vitriolic tone of anti-Muslim rhetoric within the Republican primary field and other evidence of fearful attitudes towards Islam and Muslims within the U.S. at large.

Though Trump's fellow Republican presidential candidates are distancing themselves from Trump following his proposal, he is hardly the first person seeking the party's nomination who has attempted to energize the conservative base by denouncing Muslims. Texas Sen. Ted Cruz told reporters that because "there is no meaningful risk of Christians committing acts of terror," the U.S. should only accept Christian refugees from the Syrian civil war.

Dr. Ben Carson, a first-time candidate who, like Trump, has enjoyed an unexpected rise to the top-tier of candidates, declared that taking in Syrian refugees "is a suspension of intellect." Even Florida Sen. Marco Rubio, who has been placed in the unlikely role of centrist as the field has moved rightward, said that he would be open to the idea of closing down mosques if they were linked to potential terrorist activities.

The candidates' positions have found a winning audience among Republican primary voters. A YouGov survey in November found that half of self-identified Republicans believe Muslims should be required to register in a government database of all Muslims. In September, a poll found that only 49% of Iowa Republicans believe that Islam should even be legal, with 30% declaring that the religion it should be illegal and 21% "unsure" of their opinion. Though determining whether campaign rhetoric has inspired anti-Muslim sentiment in the American public or vice versa is the political equivalent of the chicken-or-egg conundrum, Trump's newest proposal has clearly found a home in the Republican Party's base.