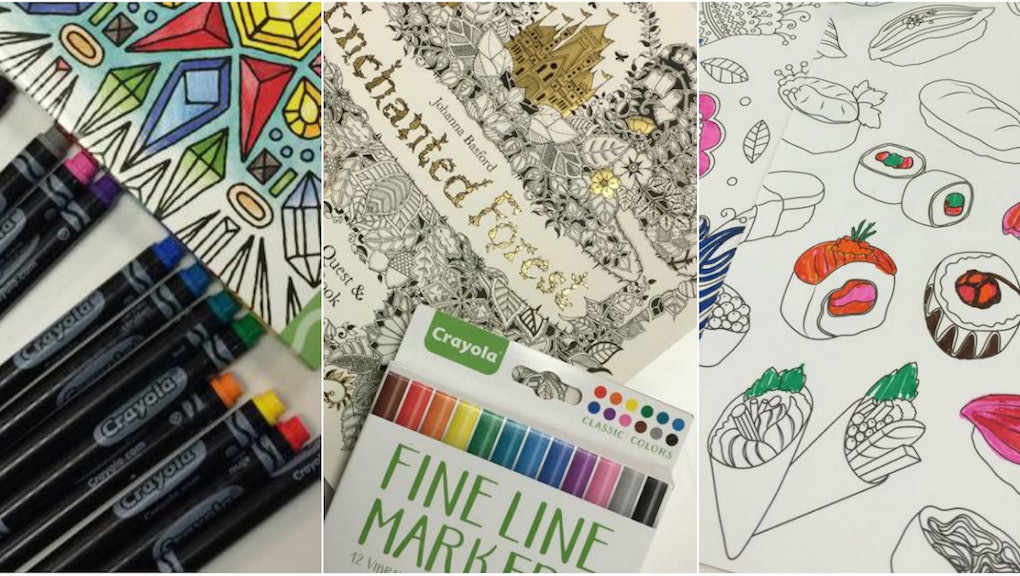 It was the middle of a busy workday, but we were determined to carve out some time for a little R&R in the form of coloring.

Yep, as in coloring in black and white pages in the "adult" coloring books that grown-ups have been gravitating to more and more in recent years. The ones that millions of people have actually propelled to the top of best-seller lists. The ones that supposedly have all those health and therapeutic benefits, including stress relief.

While the current craze began in earnest around 2012, according to the New Yorker, grown-up coloring went totally mainstream this fall with the launch of Crayola's very own adult coloring book series. The hype has inspired research on how coloring helps us relax and de-stress from our ever-jumbled adult lives. There's also been concern that the immense interest in coloring is a sign that our generation is regressing toward childhood.

But is it really all it's cracked up to be? We literally stopped work one day to try it out — and ended up learning about ourselves.

"I honestly wonder if my internet mode is, like, not conducive to coloring."

As each of us grabbed a coloring book, the conversation immediately turned to the kinds of illustrations. There was a mini debate about whether or not the drawings on paper were complex enough for adults. Were we somehow cheating if we picked an illustration with a lot more blank space? But who wants to deal with the tiny details? Was the internet to blame for our lack of patience for such things?

One Mic team member, known for her writing speed, chose a page of sushi illustrations and colored each one in with such a fast motion the colors didn't matter. Neither did staying in the lines.

"I honestly wonder if my internet mode is, like, not conducive to coloring," she said, smacking a marker on the table. Coloring takes time, and filling in a single sheet of paper can easily take hours to do. It also takes precision, which means speed isn't necessarily the most useful skill to bring to the table.

Luckily, the very act of coloring slowed us down — and revealed who really needed to be slowed down in the first place.

"It slows your brain down from its usual pace."

The longer we colored, the more everyone seemed to simmer down and shake that internet mode off.

"That's why it's so good, it's calming. It slows your brain down from its usual pace," one Mic team member said, after a few of us wondered aloud whether coloring has a de-stressing effect.

She reaffirmed what plenty of articles have claimed already. "It's slowing my brain down," she said. "Chilling out. Getting my thoughts to flow in one, slower, continuous stream instead of firing off 85 different directions at once."

Coloring can have plenty of de-stressing effects, forcing adults to focus on a single task instead of moving from one thing to the next, according to Quartz. In fact, many adult coloring books are marketed as therapy tools, the word "therapy" appearing in plenty of titles, according to the New Yorker.

"You're giving your brain some some space and something to focus on that's meditative, that's containing," art therapist Saba Harouni told Quartz.

"I'm worried I just ruined a good sheet of paper."

Not all of us, though, were ready to be hyper-focused. One team member expressed frustration at her coloring skills. "I think it's because of the picture that I picked, it's very small, tiny little details, so it makes you focus more than I really want to."

I also was frustrated and kept getting irritated by the fact that I couldn't fill in some small details with the marker pen without having the color bleed. I worried I'd ruined a good sheet of paper — which someone pointed out to me meant I was more focused on the outcome than the relaxing experience.

In that way, how we colored told us much about ourselves. Some of us took 10 minutes or more to simply slow down long enough to stay in the lines, while others were fixated on finding the perfect colors without noticing the "fun" of it at all. The pictures we chose, the way we approached the task, the frustration or joy we got out of it — all seemed to align remarkably with our personalities, making coloring a revealing task.

That said, anyone can find some enjoyment from it. Johanna Basford, the illustrator behind the best-selling coloring book Secret Garden, told NPR,  "I think everyone has a creative spark; they just need the opportunity to let it flourish. ... A blank sheet of paper can be daunting, but a coloring book has the outlines already there, making it easier to pick up a pencil and begin making your mark."

Sure enough, as we colored in the office, more and more staff walked by and a few joined in, something that might not have happened had we been, say, painting. Coloring is something to be picked up and resumed with ease at any point.

And, of course, it's a creative outlet that reflects the creator, both in the finished product and the process.