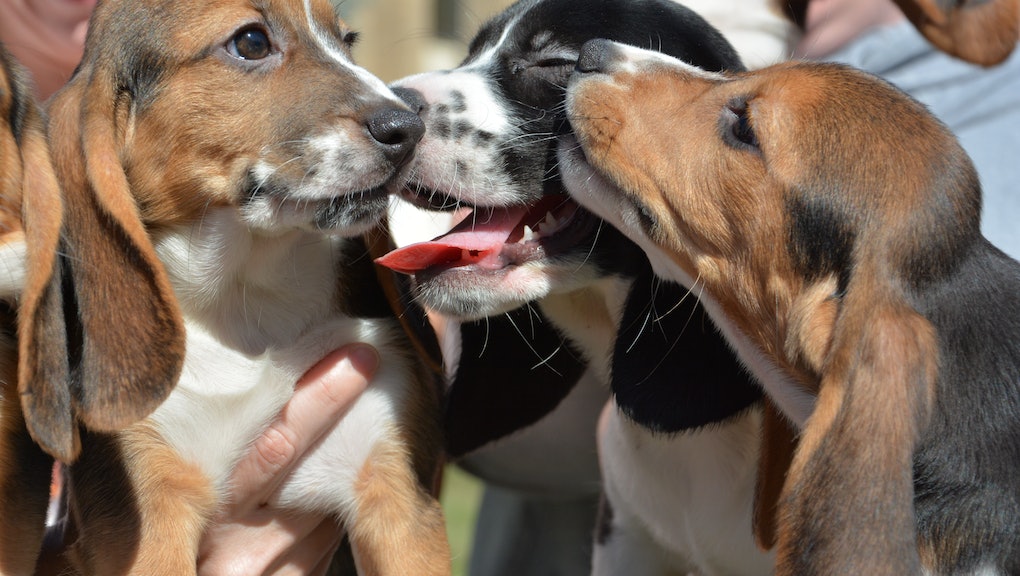 Can you guess what's special about these puppies — besides the fact that they're unbelievably adorable and a reminder that there is, in fact, still good in the world?

They're also some of the world's first puppies to enter the world via in vitro fertilization, part of a litter of seven that was born last spring. The seven pups come from different sets of parents — a mix of beagles and cocker spaniels — but all were implanted as embryos into the same mother, who eventually delivered them all.

The study, described in full in the journal PLOS ONE, was groundbreaking: For decades, dogs' unique biology had prevented scientists from mastering canine in vitro fertilization.

"Since the mid-1970s, people have been trying to do [IVF] in a dog and have been unsuccessful," co-author Alex Travis, associate professor of reproductive biology at the Baker Institute for Animal Health in Cornell's College of Veterinary Medicine, said in a release.

IVF is a common fertility treatment used in humans, whereby eggs are removed from a female's ovaries and fertilized by a male's sperm in a lab, outside the body. After a few days, the zygote is implanted back into the uterus. Now, with some newly discovered tweaks, that same process works in canines.

Why wouldn't it work in dogs? A dog's reproductive cycle is different from those of other mammals, the release explains. Remove a dog's egg at the same stage of cell maturation as you would in other animals, and you won't be able to fertilize it. The game-changing solution, the researchers found, was to leave the dogs' egg in the oviduct for an extra day before extracting it.

A female dog's anatomy also helps prepare a sperm for fertilization — something that doesn't naturally happen when fertilization occurs outside of the body. To replicate that sperm "capacitation" process, the researchers added a magnesium supplement to the cell culture.

The results of both tweaks were good: "We made those two changes, and now we achieve success in fertilization rates at 80% to 90%," Travis said.

Dogs can only get pregnant once or twice a year, so the researchers froze the embryos until the mother was ready to receive them — the same technique used in the birth of Klondike, the Western Hemisphere's first puppy born from a frozen embryo.

What's the point? Why have scientists spent decades trying to master IVF in dogs?

The technique has a number of useful applications, including saving endangered species. "We can freeze and bank sperm, and use it for artificial insemination," Travis said in the release. "We can also freeze oocytes [egg cells], but in the absence of in vitro fertilization, we couldn't use them. Now we can use this technique to conserve the genetics of endangered species."

The researchers also foresee opportunities, they wrote in the study, for "targeted propagation of domestic dogs of high genetic value" — in other words, preserving rare breeds of working dogs and show dogs.

And given the more than 350 heritable traits dogs share with humans, this newfound ability to form embryonic dogs could be a "powerful tool for understanding the genetic basis of diseases" in dogs and humans, Travis said. The researchers suggested that gene-editing technologies, such as CRISPR, could be used to run tests on genes that might predispose individuals to certain undesired traits.

"This in turn will facilitate both development of targeted treatments and genetic screening tests to be used to remove those genes from affected breeds, with broad positive impacts on human and companion animal health and welfare," the researchers wrote.

Now only one pressing question remains: How does one start the career path to becoming a puppy scientist?