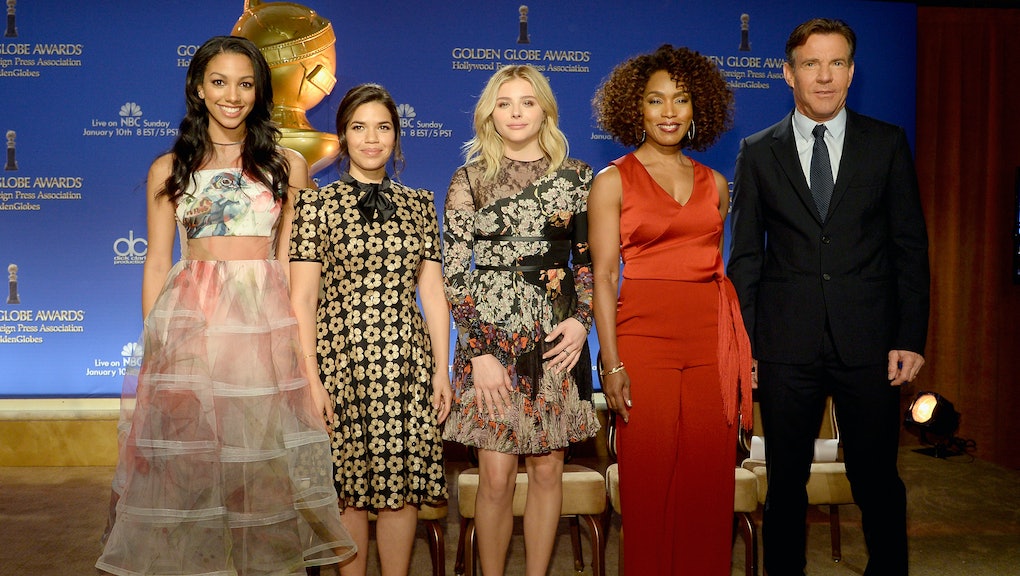 The Golden Globe nominations were announced Thursday morning, continuing an increasingly maddening awards season that has yet to settle on many major contenders in the film races. The Screen Actors Guild nominations were all over the board, seemingly honoring name recognition (Helen Mirren nominated twice) over quality (no one but Rachel McAdams for Spotlight).

This follows an Emmys ceremony in September that featured a great speech from Viola Davis but little honoring of great TV. The Grammy nominations last week were decent but had some nonsense nods caused by archaic rules and requirements.

Meanwhile, the little old Golden Globes, which last year boosted women's voices and worked as stirring, powerful television, produced a wild, exciting slate of nominees. They remain on the right side of awards history, proving once again they are the only modern awards show.

Earlier this year, the Golden Globes' voting body, the Hollywood Foreign Press Association, gave trophies to a Latina actress with a hit show on the CW and an actor playing a trans woman on an Amazon show. The HFPA nominated a black, female director the Oscars ignored. Their slate represented the vivid, diverse Hollywood people want to see despite the lack of opportunities.

The TV side was even better, nominating Empire, Narcos, Mr. Robot and Outlander for multiple trophies on the drama side. Among the best musical or comedy series nominees, Amazon's Transparent and Mozart in the Jungle, Netflix's Orange Is the New Black and Hulu's Casual joined HBO's Veep and Silicon Valley. Young and exciting creators like Aziz Ansari and Rachel Bloom got attention. Even Lady Gaga got an acting nomination, for American Horror Story.

Just reading the nominations is thrilling. There are so many new streaming providers, exciting voices and groundbreaking shows being honored here. Does it maybe sting that Mad Men wasn't nominated for its final season? Sure. Are the nominations for exciting shows on Neflix, Starz and USA worth the trade? Absolutely.

The HFPA is paying attention. They know those nominations for The Tourist back in 2010 were embarrassing. Since then, they've doubled down on giving credit to the new and innovative works the Emmys and Oscars ignore. Out of the ashes of humiliation, they've risen as a brilliant, inclusive phoenix of awards season. Even the sharpest awards prognosticators cannot guess what the Golden Globes will honor. The HFPA has brought surprise back to the work of honoring the best work of the year.

NBC will air the Golden Globes on Jan. 10, 2016. Hilariously, and perhaps the greatest indicator times are changing for the HFPA: NBC is not nominated for one Golden Globe this year.