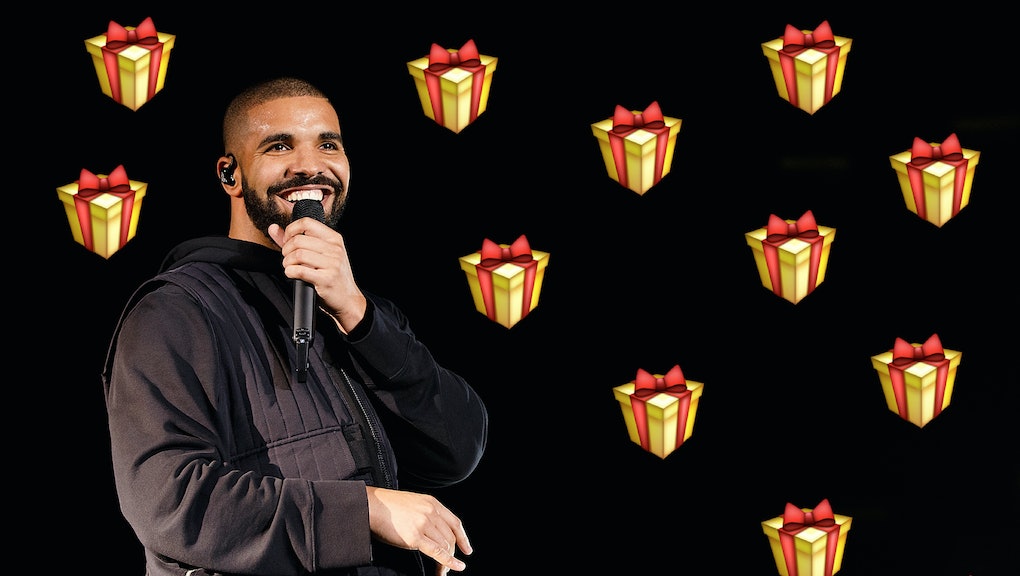 Sure, Aubrey Drake Graham was born in 1986, but 2015 may as well have been the year of Drake. Between the much-parodied "Hotline Bling" video, the record-breaking mixtape release, the feud with Meek Mill, the Serena Williams rumors and the ill-fated Coachella appearance, the Canadian rapper seemed to be everywhere this year.

Of course, all this high-wattage exposure means that Drake's fan base has grown along with his personal fame. A cursory glance at the "Drake" section of Etsy makes this clear, with thousands of products marketed toward ultra-devoted fans.

To save you time, we've compiled a list of holiday gifts for the most hardcore Drake lover in your life, from the Drake emblazoned to the Drake inspired. The price ranges vary, but one thing's for sure: They're definitely the dreams money can buy.

It was the ultimate Drake moment: In April 2014, while sitting courtside at a Toronto Raptors versus Brooklyn Nets basketball game, the Canadian rapper was caught lint-rolling his pants. Was it candid? Was it all an elaborate stunt? We'll never know, but your Drake lover will enjoy recreating the moment with his or her very own lint roller.

2. A "Drake for president" mug

You know he'd be better than Trump. Well suited for your Drake fan's desk or kitchen table.

In September, Drake partnered with restaurateur Susur Lee to open the Toronto restaurant Fring's. Featuring an opening attended by the likes of Jaden Smith, the restaurant is offering a special promotion for New Year's Eve dinner. No word if Drake himself will be there, but one can dream.

This quaint embroidered hoop is perfect as a housewarming gift, and your grandmother will probably approve.

In 2012, Drake lent his voice to Ethan, Ice Age 4's male wooly mammoth character. As an accompaniment, print out this Vulture story of every single one of Ethan's lines.

All the better for flipping the bird.

Drake's OVO Sound record label is currently home to the acts PartyNextDoor, Majid Jordan and ILoveMakonnen, among others. The mascot for the label is an owl — the letters "OVO" resemble an owl's eyes and nose — and the imagery is present on much of its merchandise. Go a step further and buy your Drake superfan an actual owl. It might require a little more care than a sweatshirt, but the exemplary devotion to Drake will be worth it.

Owl stores (?), prices vary. [Editor's note: Owning an owl is illegal in the United States. Mic is not responsible for any legal issues that result from attempting to purchase an owl.]

This pricey spray makes an appearance in "Tuscan Leather," the opening track of Drake's 2013 album Nothing Was The Same.

For the Drake fan who likes lipstick better than cologne, never fear: Mr. Ford came out with a lipstick shade named after Drake earlier this year.

10. Tickets to a Toronto Raptors game

The Raptors are Drake's favorite team, and they even have a night devoted to him. Who knows? You might just end up seeing the second coming of the aforementioned lint rolling event.

11. Degrassi: The Next Generation DVDs

Drake got his start in showbiz on the Canadian teen soap opera Degrassi as Jimmy, a star athlete who had to use a wheelchair after a school shooting. Relive Drake's acting days with the complete set of DVDs.

For the best party, this banner is a necessity.

A liquor store near you, prices vary

14. The gray turtleneck sweater from the "Hotline Bling" video

GQ tracked down the iconic gray turtleneck from Drake's "Hotline Bling" video, which is by Swedish clothing brand Acne. Keep warm and honor Drake at the same time.

To match your "Worst Behavior" banner, of course.

What could be better than wearing Drake's face all over your legs?

17. Tickets to the James Turrell exhibit at MoMA PS1

Though he's denied any connection, artist James Turrell may well have been the inspiration for the "Hotline Bling" video's colorful set. PS 1, the subspace of New York City's Museum of Modern Art, has played host to a permanent James Turrell installation since 1986. Buy your beloved Drake fan a ticket so he or she can star in a low-rent "Hotline Bling" remake.

Drake alludes to his Acura-owning past in the track "Worst Behavior" from Nothing Was The Same. This is the most expensive item on the list, but if your Drake fan is truly committed, it's worth it.