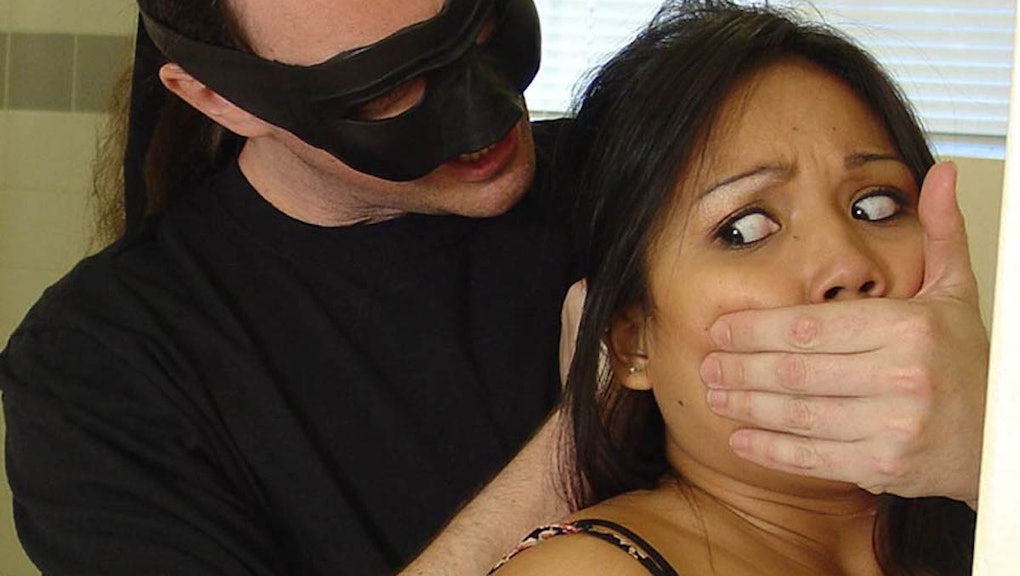 A long-haired man in a well-worn leather jacket peeps through a woman's curtains. He leers beneath the brim of his dirty trucker hat as she undresses, unaware she's being watched. After a few moments, he slinks through the window, knife held between his teeth. At the last possible moment, she catches his reflection in a mirror. She starts to scream, but it's too late. His hands close around her throat.

Welcome to the world of Tim Woodman.

Yet in many ways, Woodman is a laid-back, West Coast-bred average Joe. He was a music theory major in college and played lead guitar in a few heavy metal bands before entering the industry. He drives a '97 Pontiac Firebird and has an abiding interest in astronomy. He's also deeply in love with a woman he calls "my Sweetie." (The two are in an open relationship, and recently celebrated 20 years together.)

"I play the thug, criminal, monster or whatever — whoever abducts the girl," Woodman explains. "Everybody wants her to be rescued, but first, secretly, they want to see her tied up, stripped and fondled, maybe even tortured or worse. That's where I come in. I'm everybody's inner monster, doing the horrible things they secretly want to so they can enjoy their darkest desires guilt-free."

To play this role on film, "you have to be a special combination of real-life good guy — empathetic and caring — and on-camera demon, one who's capable of despicable, horrible, yet sexy, evil," he added. "I don't know how I ended up with that personality, but I'm sure glad I did."

"And he's such a nice guy in real life," she added. "But don't tell anyone I said that — it'll damage his Pro Villain reputation."

Woodman's work also requires a high level of interpersonal skills, such as the capacity to read and respond to a scene partner's particular comfort level. That's important, considering how hardcore the content he shoots is.

"It's actually very demanding work," Woodman asserts, "And it took me years of training to achieve the skill level I have now. This is definitely a 'Don't try this at home, I'm a professional' kind of job."

First, they go through what is essentially a series of consent check-ins; then they discuss scene ideas before having a conversation about what she is and isn't comfortable with. For example, once, in a suspension scene where Woodman hogtied Preston and hoisted her up in the air, they had a conversation about restraining her hands behind her back and which types of grips were comfortable for her.

"Sometimes expectations between performers are different initially, so clarity is very important before you begin work together," Preston told Mic. "Also, we communicated what our overall likes and dislikes were so we both could have a good time while working. Even though this is a job, it's possible for both parties to have fun while doing it."

Of course, even though Woodman and his scene partners clearly negotiate their boundaries and establish what is and isn't OK beforehand, it's understandable why the viewer watching at home might believe otherwise. On one hand, a porn film is a highly staged production, making it no different from a new release playing at your local theatre. On the other hand, most people don't know what goes on on set, and if we see something on-screen that's sometimes challenging to process — like, for instance, a staged rape scene — viewers may wonder: How "real," exactly, is it? The fact that Woodman is a man and is often seen dominating women also plays into how many might view content.

According to Emily Prior, Executive Director of the Center for Positive Sexuality, rape and abduction fantasies are fairly common among heterosexual women. In fact, Prior told Mic that there have been several studies dating back to the early 1970s that suggest that a sizable percentage of women "have fantasies about being overpowered in a variety of ways. Participant reports change depending on the language used — rape, force, domination/submission, etc — but it still comes down to the same idea."

Contrary to popular belief, Prior told Mic, fantasizing and/or actualizing these sorts of scenarios via consensual role-play isn't "dangerous." In fact, it can be incredibly healthy.

"There's a lot of support around the idea that fantasizing about things can be quite healthy," Prior said. "Not only does this allow us some creative expression, but it may also help keep us from actually doing harm to ourselves or others."

"People think acting out these fantasies is bad because that's what society says," she added. "There is a lot of rhetoric about not giving into your desires, especially in relation to sex, because somehow this will start you down that 'slippery slope' of deviance. There's really no evidence to support this ... If we can get past that hurdle, acting out our fantasies with a consenting partner in a safe environment can be extremely fulfilling and helpful," she added.

"I have to do careful workarounds and stay in the shadows to avoid problems and be able to process sales. At the same time I somehow have to let my customers know how to find me," Woodman explains. "It's frustrating sometimes that the taboo of my job creates such challenges. It's totally worth it, but frustrating all the same."

"In real life, these acts would be morbid and unethical. They go against the moral context that we function in daily," Preston explained. "But it's ok to explore outside of this moral context in a safe and consensual way. If fantasies abided by the parameters that we usually function in in everyday life, then there would no point in having fantasies at all."

Though we may know this rationally, the types of fantasies Woodman depicts still strike sharp cords, ones that are tied to ideas of social and sexual propriety, as well as gender.

"Ironically, rape fantasy is one of the most popular fantasies among women all across the planet — but finding a safe way to enjoy it or even admit to it is still very difficult," he said.

"I find myself lying a lot at parties when people ask me what I do for a living," he added with a bit of chagrin.