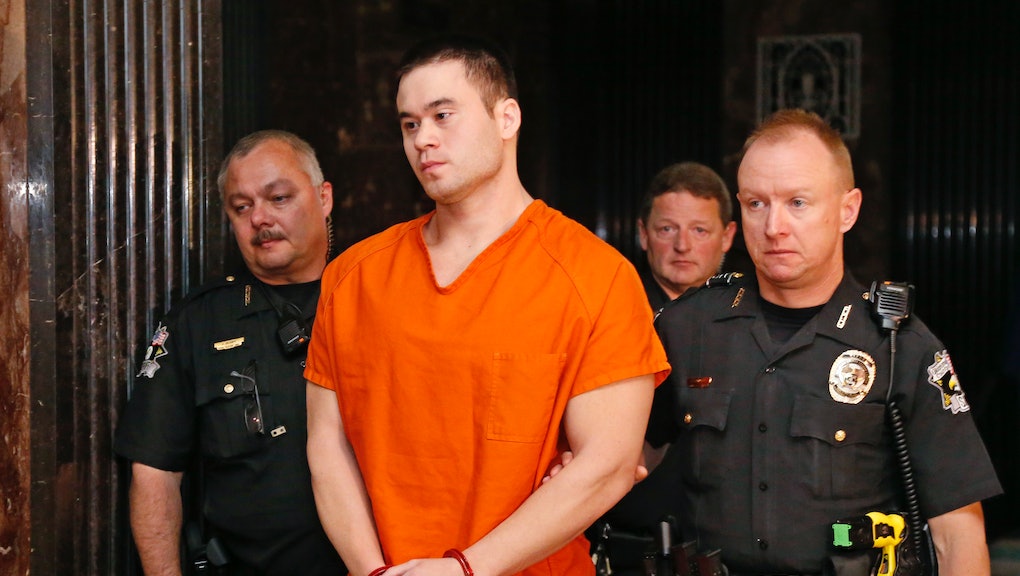 Just 2% of reported rapists ever see a day in jail, according to the Rape, Abuse and Incest National Network. That former Oklahoma City police Officer Daniel Holtzclaw was found guilty of 18 counts of charges ranging from rape to sexual battery to forced sodomy is therefore a victory for survivors everywhere. But his conviction is particularly meaningful for the women he, like too many others, targeted, presumably based on the assumption that they could never be believed: women of color.

The case: Holtzclaw, who first went on trial for the alleged assault of 13 women in November, is hardly the only police officer to face ramifications for sexual misconduct. In fact, hundreds of police officers have been prohibited from working in law enforcement between 2009 and 2014 for this reason, the Associated Press reported in November. But, as Mic's Zak Cheney-Rice reported in November, one horrifying detail of Holtzclaw's crimes highlights a broader problem: At least eight of the assailant's targets were low-income women of color.

Holtzclaw's targets were picked precisely because "they were black and poor," the Daily Beast's Goldie Taylor wrote Thursday. "They were picked because the perpetrator thought nobody would give a damn."

But Holtzclaw was ultimately wrong. Of 36 total charges, he was found guilty of five counts of rape and 13 counts of sexual assault, BuzzFeed reported Thursday evening, and faces life in prison when he is sentenced in late January.

Justice for survivors of color: While Holtzclaw's conviction is a rare but welcome exception, his actions are not. Black women experience assault at the hands of police officers at an alarming rate. Sexual misconduct was the second most common form of police misconduct reported in 2010, according to the CATO Institute's 2010 annual report. More than 600 officers were involved in sexual misconduct complaints in that period and 354 involved sexual assault or battery, according to the report.

"When we look at how police and state violence affects black women, it includes ... black women and girls being sexually assaulted, harassed and beaten by officers as well," Charlene Carruthers, national director of the Black Youth Project 100, told Mic in May.

The troubling reality is only compounded by the context in which black women encounter the experience. Sixty percent of black women are sexually assaulted before the age of 18, according to research conducted by the organization Black Women's Blueprint and reported by BET. Many have noted this high rate of violence is likely tied to the persistent tendency to objectify women of color's bodies and view them as hypersexual, due in no small part to a historical legacy in which black women were legally "unrapeable" in this country for decades.

Many women of color, therefore, choose not to even report their assault for fear of risking re-traumatization. It's unfortunately a reaction founded in reality: While survivors of all backgrounds rarely lie about experiencing assault, police officers fail to believe their claims and even blame them for their own assaults.

Should women of color report their assaults anyway, they may encounter damaging dismissal of their claims in court. One study showed that juries often deem survivors of color's assaults as "less traumatic." This reality likely contributes to the reality that for every rape reported by a black woman, 15 more go unreported among the same demographic, according to For Harriet.

Hope for the future: For these reasons, and likely many more, justice is frequently all but unobtainable for survivors of color. As the Daily Beast's Taylor wrote, the survivors who first came forward in this case were originally ignored because "they weren't the kind of women who make for 'good victims' on the evening news or on the witness stand." It wasn't until one survivor in her 50s and from a different neighborhood that detectives took note of the case, Taylor wrote.

"All too often, despite the presence of physical evidence, as a society we refuse to believe black women can be victims or survivors of sexual violence," Taylor wrote.

There is no "perfect victim," no type of person whose assault is more valid or worthy of justice than others. Should Holtzclaw's horrifying actions serve any purpose, hopefully it will be to remind the world of just that.