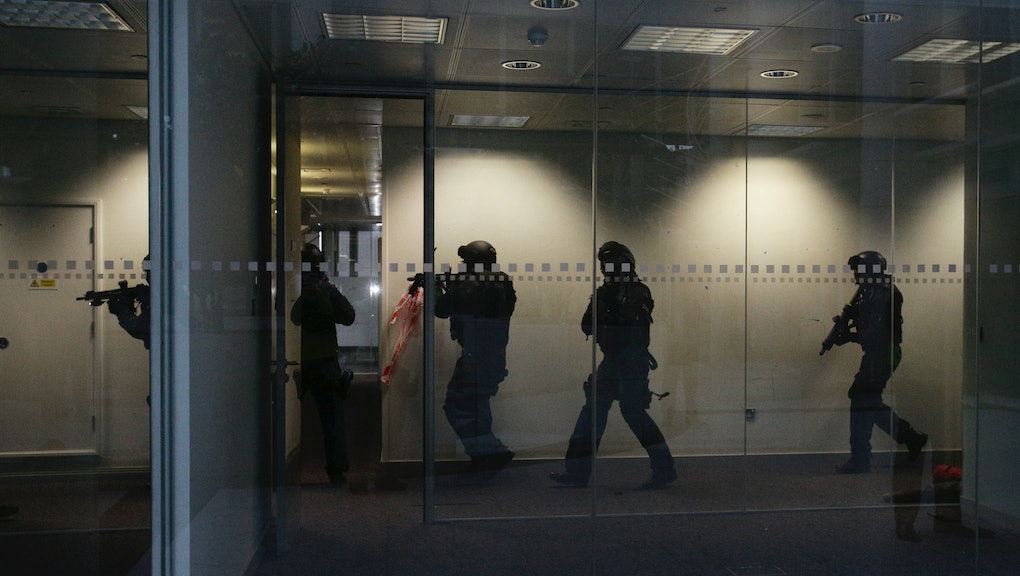 U.S. Police Killed More People in November Than English Police Have in 25 Years

An unidentified man was shot and killed by Metropolitan Police officers Friday morning during an operation in north London, England, according to the BBC. The operation was "intelligence-led," but not related to terrorism, the Met said.

The shooting is significant for its rarity. As protests roil across the United States in response to officer-involved killings of black Americans, the disparity between police killings in the U.S. versus other Western countries has been a telling point of comparison.

The UK-based advocacy group Inquest reports police in England and Wales have killed 24 people since 1990. In contrast, police killed 78 people in the United States in November 2015 alone, according to the Guardian. As of Dec. 11, U.S. police have killed 22 people this month — nearly equaling the English and Welsh numbers of the past 25 years combined.

This disparity has been especially pronounced in 2015. Since protests erupted in Ferguson, Missouri, in response to the police killing of 18-year-old Michael Brown in August 2014, a political movement to address racism and state violence has coalesced around American law enforcement. Intensified scrutiny of police has taken many forms, one being an effort to track the number of people killed by police each year — a figure that has traditionally only been reported to the FBI on a voluntary basis by local departments.

Both the Guardian and the Washington Post have established databases to track these numbers. The Guardian's The Counted lists 1,063 people killed in 2015. The Post's database — which only counts police killings that resulted from shootings — lists 917.

The UK figures reported by Inquest are collected independently of those tallied by the Home Department's Independent Police Complaints Commission. The IPCC counted one fatal shooting by police officers in England and Wales in 2014.

Part of the reason for the disparity is simple: Police in England and Wales do not carry firearms on patrol — only in special cases, like Friday's operation. Even so, this does not render them immune from discriminatory practices. Advocates cite racially selective law enforcement as a major problem among police in the UK. The Met's own Metropolitan Black Police Association declared Scotland Yard "institutionally racist" in 2013.

The work of American police is complicated by the abundance of firearms among the citizenry — a topic that's fueled heated debate in the wake of multiple mass shootings. But the body count differential speaks to a fundamental difference in attitude as well. According to the New York Times, American police representatives have been encouraged to visit the United Kingdom and learn about less violent forms of engagement.

"The basic fundamental principle, even in the areas where there's high levels of crime, high levels of social deprivation, is it's community-based policing by unarmed officers," Bernard Higgins, an assistant chief constable in Scotland, told a group of American law enforcement leaders recently, according to the Times. "We police from an absolute position of embracing democracy."

So far, the heightened attention to this issue has yielded results in the U.S. Earlier this week, the FBI announced it would expand its system for collecting data on police killings in 2017. This data will also be shared with the public in real-time, as the killings occur — ensuring the victims' deaths can no longer be ignored by pundits and policymakers.

Meanwhile, not a month has gone by in 2015 where the rate of people killed by police has been less than two per day.