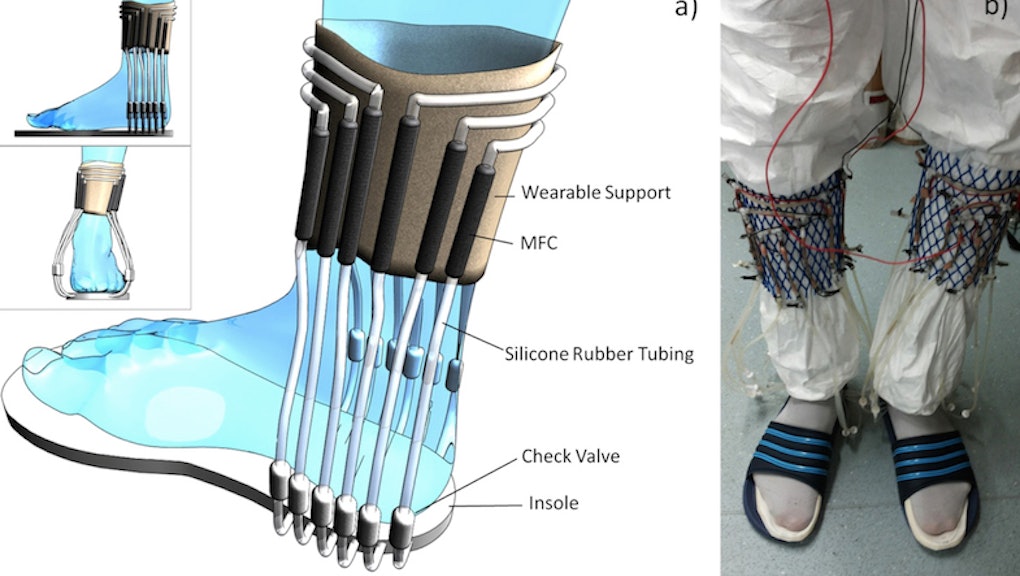 These Socks Actually Turn Your Pee Into Electricity and They're Now No. 1 on Our List

Finally, a good reason to pee on yourself.

A group of researchers at the University of the West of England have developed a pair of socks that use urine to produce electricity. The socks don't need an external power source — the wearer can make the conversion happen by simply taking a few steps.

The socks contain a series of tubes that can hold 648 milliliters — a little more than a bladder's worth — of urine. Walking around in the socks pushes the pee through microbial fuel cells, which are full of bacteria that are more than happy to roll around in and eat up the nutrients in your urine, thereby producing electricity.

The researchers detailed their findings in a paper published in the journal Bioinspiration & Biomimetics. In a series of lab experiments, their nifty socks yielded enough electricity to allow a wireless transmitter to send the message "World's First Wearable MFC" every two minutes.

"There is a boom in wearable electronics, and the ability to make biological fuel cells that are flexible and wearable takes the application to the next level," Heather Luckarift, a researcher at a company that creates biotechnologies for the United States Air Force, told New Scientist.

Dealing with urine is nothing new to Ioannis Ieropoulos, the lead researcher on the project and professor at the University of the West of England. He's also the principal investigator on what's called the "urine-tricity" project, a Bill and Melinda Gates-funded venture that looks at ways of using urine to produce power.

A separate project saw Ieropoulos and his team use the substance to power a mobile phone, but it needed an electrical pump to push the urine through to the MFCs. The socks, on the other hand, need no such help. The team used the cardiovascular system of fish — which use involuntary muscles in their circulatory system — as their inspiration. Walking in the socks pushes the pee through the tubes sort of how fish pump blood through their veins.

Of course, the question on everyone's mind is just how, exactly, the urine will get in the socks. (We're not all Bear Grylls, after all.)

"We envisage gear or clothing that already has or could have excretion incorporated, without people having to worry about collecting or handling their urine," Ieropoulos explained to New Scientist. He cited military, space, ski and outdoor clothing as the ideal prototypes.

What a golden, golden world we live in.