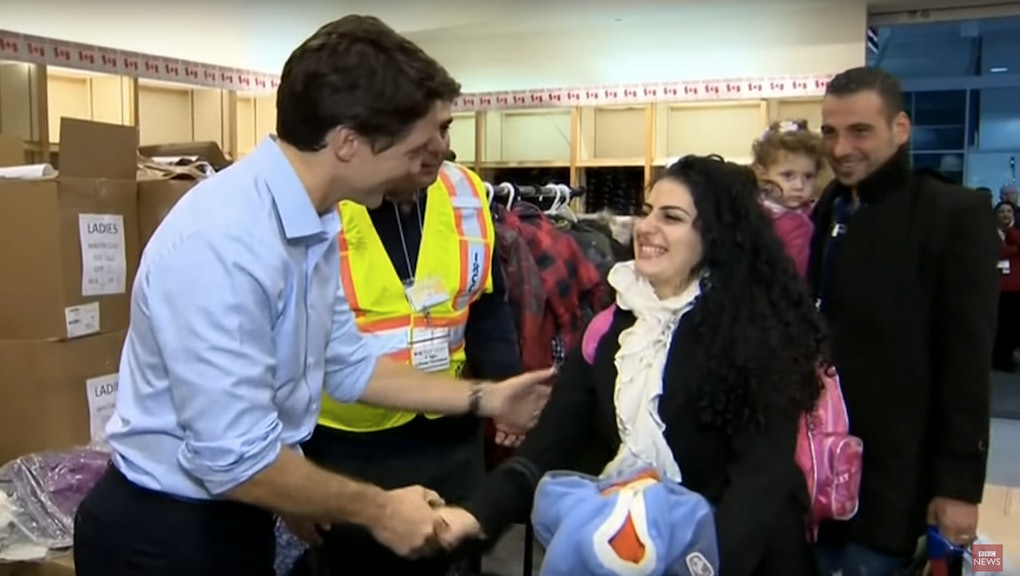 A pretty face and a heart of gold? It's almost too much. Almost.

The first plane of Syrian refugees headed for Canada touched down in the country late Thursday, and Prime Minister Justin Trudeau was on hand to welcome the arrivals. Canada is on track to accept 25,000 refugees by February.

"We define a Canadian not by a skin color or a language or a religion or a background, but by a shared set of values, aspirations, hopes and dreams," Trudeau said during the arrival ceremony.

The first arrival was Kevork Jamkossian, a gynecologist from Aleppo, along with his wife Georgina Zires, a lab technician and their 16-month old daughter, the Associated Press reported.

"We really would like to thank you for all this hospitality and the warm welcome," Jamkossian told Trudeau through an interpreter. "We felt ourselves at home."

Canada's warm reception of refugees contrasts starkly with the U.S. response. While the federal government has said the United States will accept 10,000 refugees over the next year, with plans for 100,000 a year by 2017, that proposal has received widespread pushback at the state level as well as on the presidential campaign trail. In the wake of the Islamic State group attacks in Paris, more than half of U.S. governors from both political parties have said they would not accept refugees into their states. Republican presidential front-runner Donald Trump has called for a complete moratorium on all Muslims seeking to emigrate to the United States. Trump has said as president he would deport Syrian refugees already living in the United States.