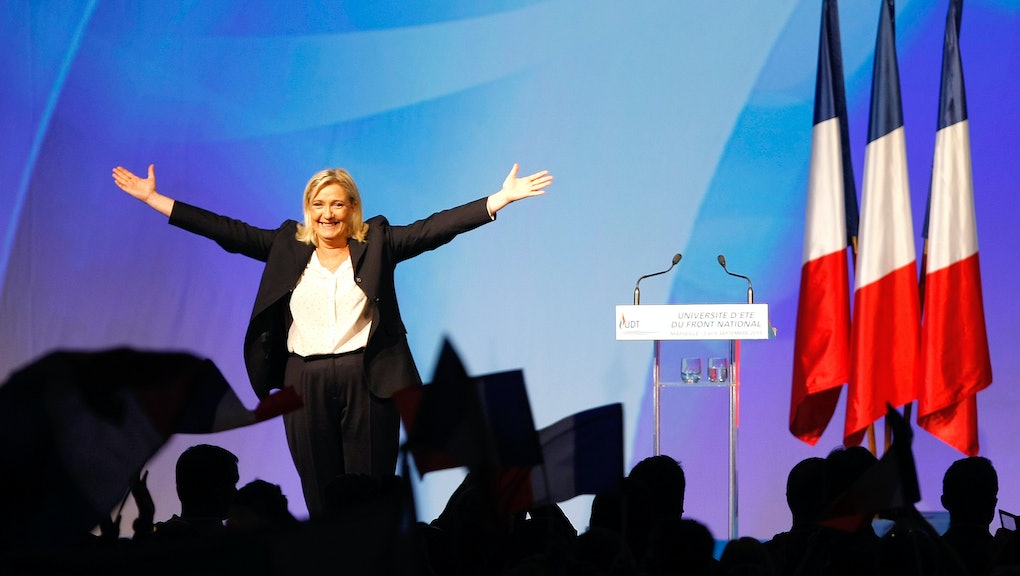 When Donald Trump called for the "total and complete shutdown of Muslims entering the United States" on Monday, his fellow Republican candidates capitalized on an opportunity to distance themselves from the GOP frontrunner. On Twitter, former Florida Gov. Jeb Bush called Trump "unhinged" and Florida Sen. Marco Rubio said, "His habit of making outlandish and offensive comments will not bring Americans together."

More and more, the Donald is wearing on some of the country's — and the world's — foremost politicians, whose beliefs range from populist to conservative to, yes, fascist.

A probable contender for the 2017 French presidential election, Le Pen is the head of the National Front, a socially conservative political party largely known for its anti-immigration platform. So, on the surface, her stance on immigration doesn't seem so far off from that of Trump. "They are stealing from the poor to give to foreigners who did not even ask our permission to come here," said Le Pen at a recent event, according to the New York Times. Sound familiar — or, perhaps, Trumpian?

The politician would argue otherwise. During a televised interview Thursday, Le Pen insisted Trump took it too far in his demand for a Muslim ban. "Seriously, have you ever heard me say something like that?" she asked, according to the New York Times. "I defend all the French people in France, regardless of their origin, regardless of their religion."

Farage, leader of the U.K. Independence Party, condemned Trump in a BBC News interview on Tuesday, "Mr. Trump's somewhat knee-jerk reaction to this, saying that all Muslims should be banned from coming into America, was, perhaps, for him, a political mistake too far."

This from the man who told British Muslims they should choose their nation over their religion. In a speech following the Paris attacks, Farage said, "It is clear that the U.K. Muslim population are conflicted in their loyalties between loyalty to the U.K., its way of life and its institutions and what elements within their organised faith are telling them," BuzzFeed reported.

In an interview on Monday with conservative talk radio host Hugh Hewitt, the former vice president said Trump's statement contradicts America's founding principles. "I think this whole notion that somehow we can just say no more Muslims, just ban a whole religion, goes against everything we stand for and believe in," Cheney said. "I mean, religious freedom has been a very important part of our history and where we came from. A lot of people, my ancestors got here, because they were Puritans."

Trump's mission of spreading Islamophobia and other damaging concepts seems to be a divisive one. But his words could also have a unifying effect, as people of vastly opposing politics suddenly find themselves on common ground.

It's going to be a cozy holiday season.