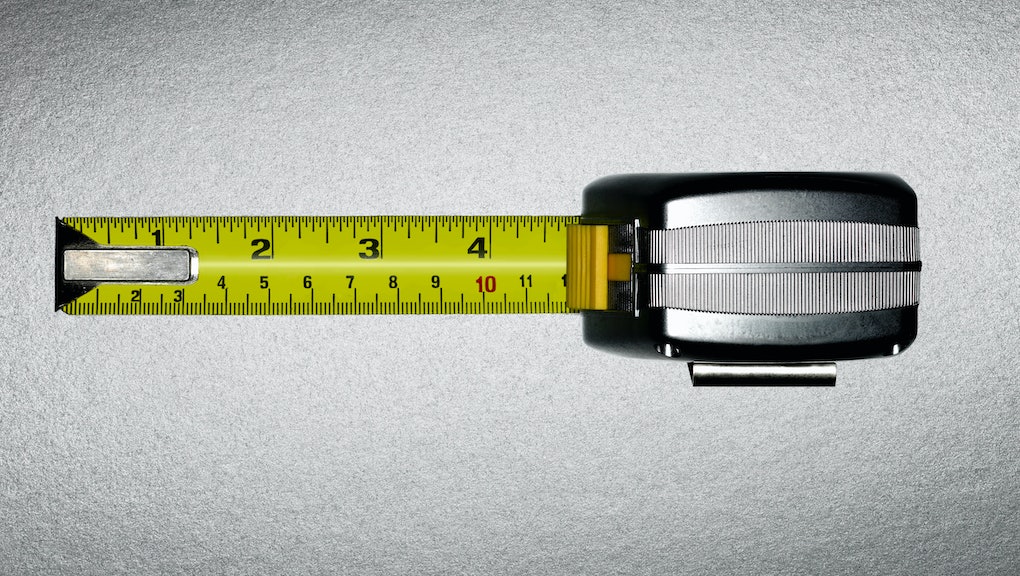 Even if you don't have a small penis, you might think you do. In a June 2007 report in the urology journal BJU International, researchers found that while an overwhelming majority of female respondents (85%) were happy with their partner's size, 45% of men exhibit symptoms of "penis anxiety," wishing their member were bigger. Only 6% of guys have what is medically classified as a "micropenis" — measuring less than 2.75 inches — but many still feel like they don't measure up.

For my entire life, I've been one of those guys.

Bigger isn't better: There have been numerous studies on male penis size, and while findings vary, the median across surveys estimates male penis size to be around 5.2 inches; the Psychology of Men and Masculinity found that a majority of men (68%) are in the range of 4.6 to 6.2 inches. At almost exactly 5 inches, I'm on the low end of that spectrum; my member isn't abnormal, but size-wise it's certainly nothing impressive. As an adult, I've learned to joke about it with men I'm dating to pre-empt any feelings of disappointment. I like to say I have the "Kate Mara of penises" — it doesn't take away from the scene, but it doesn't add much either.

Most partners have been relatively cool about it, but it's not the supportive comments that stick with you. After ending things with my boyfriend a couple years ago, I went to a friend's "no shirts allowed" party — essentially a cover for a giant sex party — as part of a personal liberation tour. The first man who kissed me put his hand down my pants, clearly expecting something different than what he ended up with. He pulled back in disgust. I'd experienced versions of that reaction before — the guy who doesn't call you back or makes up an excuse about why he can't see you again. In college, a guy pretended his father died just to avoid the situation.

The dangers of dick-shaming: Those instances of rejection lead to a great deal of pain for many men. Every guy knows the statistics on penis size and might objectively understand he's "average," but that's different than feeling validated or secure in your body. And according to body positivity advocate Ant Smith, who has written extensively about having a smaller-than-average member, that shame can be extremely dangerous. "To my knowledge, there's no research on the relationship between having small penis anxiety and suicide, but on support forums I've read story after story from devastated men," Smith wrote in the Independent.

Smith is right: There's little research on the subject, but a handful of stories reflect the worst-case scenarios when it comes to internalizing shame. A 2006 report from the Star in Malaysia claimed a local 18-year-old college student "jumped to his death" because he felt that his small penis made his life "boring and meaningless." Last year, a heartbreaking suicide letter posted to Reddit detailed the user's feelings of worthlessness because of his "very small penis."

"I realized not only am I not entitled to women or love, I am not even worthy of it," he wrote. "You can't have what you can't earn."

These are extreme situations and far from reflective of everyone's experiences, but as the BBC reports, anxiety around one's size can lead to other mental health issues from an early age, including body dysmorphia and depression. Commonly referred to as "locker room syndrome," these feelings can start as young as grade school — when boys begin comparing themselves to others and find themselves lacking.

The insecurity over penis size can arise later in life as well. Jesse, 28*, claimed that after his circumcision — a rite customarily observed in his culture around the age of 12 or 13 — he began to feel intense self-loathing about his body. "It decreased my length and made me hyper-aware of my size," he said. "I projected a lot of insecurities onto this, and it shaped my early adult life and my willingness to engage with others. It caused a lot of internal tension, confusion, lack of desire, feelings of inadequacy and unworthiness for years."

This isn't just an issue in Southeast Asia: A recent survey from the Centers for Disease Control and Prevention showed that 60% of American schools fell woefully short of sex education standards. Having this kind of information available to you, especially when it comes to the reality of your body, is incredibly important in normalizing your experiences.

Not everyone loves big dicks: We often fail to recognize that our experiences and tastes are just as variable as the penis itself. In an essay for the Frisky, Rachel Kramer Bussell wrote that she actually favors men with smaller penises, which is common among women. While surveys show that women enjoy a larger package for a one-night stand, a majority like a more petite version in a long-term partner, simply because it's more manageable. As one respondent emphatically stressed, big penises can be hard work, and having a larger penis doesn't make you any better in bed. As one Redditor memorably put it: "A big dick on a dead fish is no fun, but a small dick on an enthusiastic sex ninja is tons of fun."

Even though a preference for "throbbing 9-inch cocks" might be ubiquitous on hookup apps like Grindr and Scruff, that doesn't mean that the "ideal" is necessarily everyone's cup of tea. Instead, you should find partners who desire what you have to offer — whether it's 11 thick inches or five perfectly average ones. Everyone is different, which is what makes sex so amazing.

To be comfortable in our own (fore)skin, the trick is learning to be honest about our desires — both with our partners and ourselves. In my case, that entailed asking myself why I felt so ashamed about my size in the first place: If I didn't necessarily like gigantic cocks on my partners, why did I desire one for myself? My own feelings of insecurity weren't about personal preference but about avoiding rejection: I wanted to fit some guy at a party's definition of masculinity or have a rando put his hand down my pants and grab on tight. I wanted to make my partners and even total strangers happy, instead of thinking about what would make me happiest.

I may never get to a place where I feel like I measure up, but at least I've learned to stop using someone else's measuring stick.