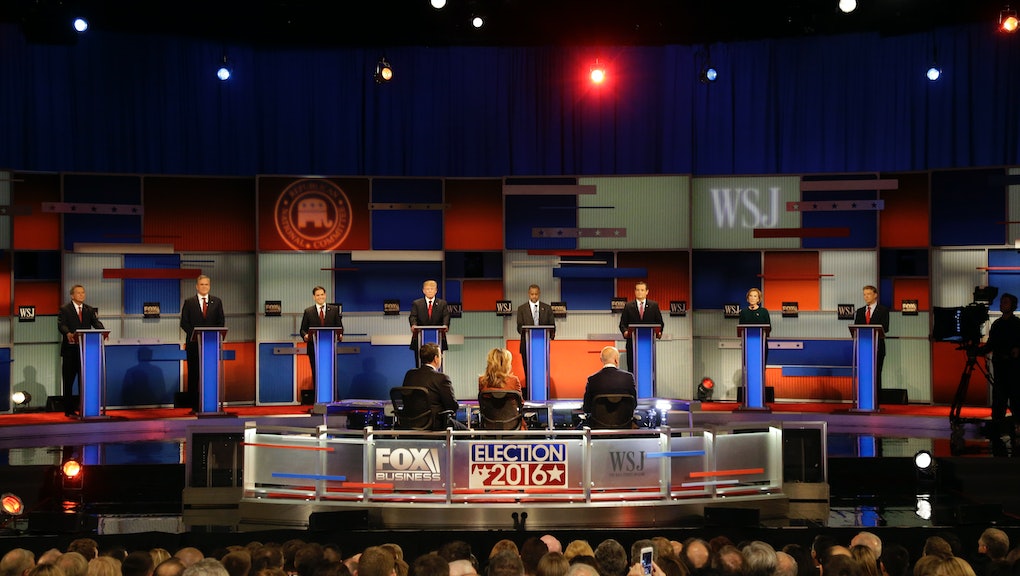 Live from Las Vegas, Nevada, it's the fifth and final Republican presidential debate of 2015: The leading nine candidates will spar starting at 8:30 p.m. EST on Tuesday, Dec. 15. CNN will air the event, and the CNN.com homepage will stream it, while audio coverage will be available on Salem Radio Network. Full coverage starts at 5 p.m. and runs to 11 p.m., and includes a broadcast of the early debate, which begins at 6 p.m.

The candidates: According to CNN, the candidates will take the following positions on the stage, from left to right: Ohio Governor John Kasich, ex-HP executive Carly Fiorina, Senator Marco Rubio of Florida, former neurosurgeon Ben Carson, Donald Trump — who remains the party frontrunner — at centerstage, Senator Ted Cruz of Texas — who, over the weekend, pulled ahead of Trump in Iowa — former Florida Governor Jeb Bush, New Jersey Governor Chris Christie and Senator Rand Paul of Kentucky at far right.

Chris Christie did not make the main stage for the Nov. 10 debate. In order to qualify for the main event, candidates must have averaged a minimum of 3.5% support in national polls, or 4% in either Iowa or New Hampshire. By the grace of polling numbers he registered in Iowa Sunday morning, Paul made the cut, but just barely. Kasich, Fiorina and Christie were saved by their New Hampshire stats, CNN reports.

Former Governor of New York George Pataki, former Arkansas Governor Mike Huckabee, former Senator of Pennsylvania Rick Santorum and South Carolina's Senator Lindsey Graham were not so lucky: they make up the kids' table that is the early debate, and will appear in the above order — from left to right — for round one.

The moderators: CNN's Wolf Blitzer, of The Situation Room, will moderate, while Dana Bash — CNN's chief political correspondent — and Hugh Hewitt — whose talk radio show served as the platform for Trump's foreign policy fumbles back in September — will be asking the questions. Bash and Hewitt also pitched the candidates questions on the Sept. 16 GOP debate at California's Ronald Reagan Presidential Library.

Trump has begun to lash out at Cruz, who has pulled ahead of The Donald in Iowa. Viewers can count on some verbal battery in classic Trump style.

The UN Climate Change Conference wrapped in Paris on Saturday with 195 nations reaching an accord, the New York Times reported. Jim Inhofe, GOP chairman of the Senate Environment and Public Works Committee, wasted no time denouncing the deal; the candidates will likely have to outline clear positions of their own on Tuesday night.

Three years after the Dec. 2012 Sandy Hook shooting, and in the wake of recent attacks in San Bernardino, Colorado Springs (which also raises the issue of Planned Parenthood, a favorite Republican talking point) and Roseburg, Oregon; in a year that has seen 355 mass shootings to date; when the no-fly list has become a point of contention in gun purchasing; with President Obama pushing an executive order on gun control, viewers can bet that the Second Amendment will feature prominently in Tuesday's exchange.