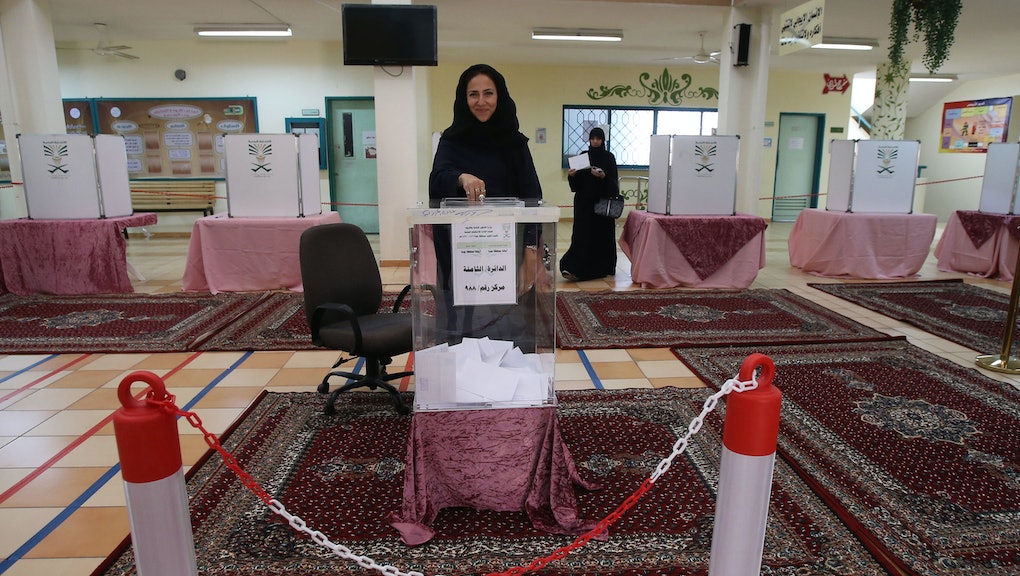 Over the weekend, voters in Saudi Arabia elected 20 women to seats in the country's local government. The election marked the first time women have been allowed to stand for elections in the conservative Islamic nation, according to the Associated Press.

The races for 2,100 local municipal council seats brought out 7,000 candidates, of which 979 were women.

While successful female candidates could be found around the country, the lion's share of winners tended to be clustered in the nation's more cosmopolitan cities, with the most — four — coming from the capital Riyadh. In addition, two candidates came from Jeddah, another two from Qassim, two from the northwestern city of Tabuk and two from the desert-swept Eastern Province, according to results provided to the newswire. The mayor of Mecca, which is the heart of Saudi Arabia's hyper-conservative brand of Islam, told the AP that a woman also won a seat in a nearby city.

"We need to change the way people think about women," Nassima al-Sada, an activist from the Eastern Province, told the Guardian as the elections approached. "If we want to improve things in this country we need men and women at all levels of decision-making."

Despite the progress, the kingdom on the whole remains a hostile place for women, which, says Al-Jazeera, is the last country to give women the right to vote. Women are forbidden by custom from driving, cannot leave their homes without a male "guardian" and are required to follow a dress code that typically entails a head-to-toe black cloak called an abaya.

"If we want to improve things in this country we need men and women at all levels of decision-making."

Notably, the elections were only for local positions. More meaningful posts with larger jurisdictions — like provincial governorships — are typically held by male members of the country's ruling Al Saud family. Without democratic input, the country's legal system has taken on a strict and draconian interpretation of Islamic law. Punishments for various crimes, in some cases behavior that would be completely normal in the West, may be met with flogging, amputation and death. Under Saudi Arabia's new King Salman, capital punishments have increased so much that the country issued a job posting seeking qualified executioners.

While Saturday's elections are a major milestone for women, and democracy as a whole in the country, it remains to be seen whether their participation will meaningfully change the status of women within the country's social, political and legal systems.