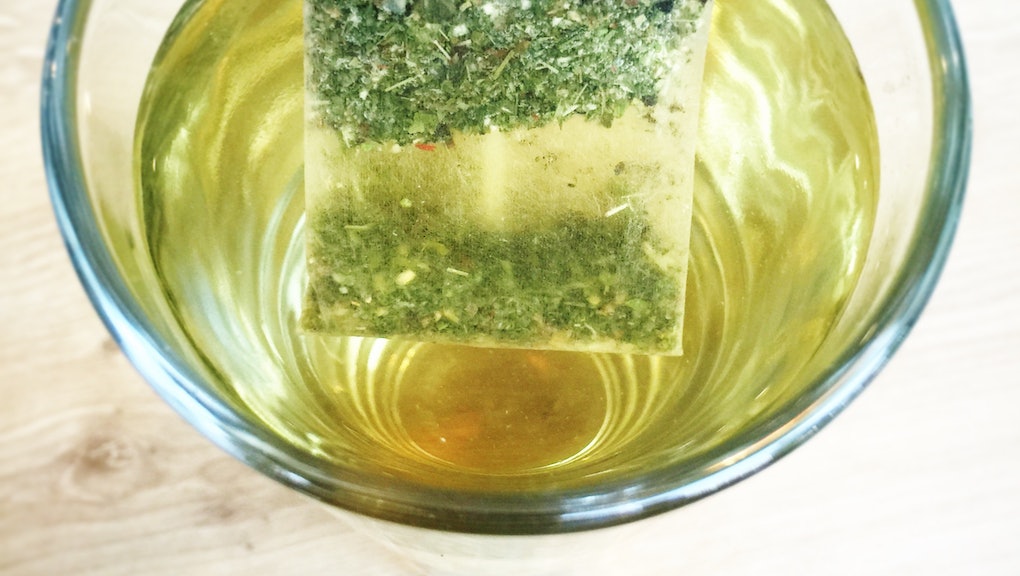 Drinking Too Much Green Tea Could Affect Your Ability to Have Kids, Study Says

Green tea may be known for its health benefits, but a recent study has some worrisome news for lovers of the antioxidant-rich beverage: namely, that it might impair your ability to reproduce.

This potentially major bummer comes courtesy of a study published in the Journal of Functional Foods. Researchers examined the effect of green tea on the development and reproduction of fruit flies. In the experiment, they exposed fruit fly embryos and larvae to various doses of the antioxidants found in green tea, known as green tea polyphenols.

For larvae exposed to higher amounts of green tea polyphenols, there was bad news: The scientists found they "were slower to develop, emerged smaller and exhibited a dramatic decline in the number of emerged offspring." The polyphenols protected them against dehydration, but made them more sensitive to starvation and heat stress.

The polyphenols were also found to have "a negative impact on reproductive organs in both males and females," such as a dearth of mature eggs in females and atrophic testes in males. Negative, indeed.

"Collectively the data show that high doses of GTP adversely affect development and reproduction" of fruit flies, the scientists wrote.

Why does it matter for us? Lead author Mahtab Jafari's research group at the University of California, Irvine, explores ways to increase the human lifespan.

Fruit flies, the group's website explains, make an ideal model system to study aging because they share 75% of the disease genes found in humans. They even mimic certain aspects of human physiology, such as the tendency to become imbalanced after consuming too much alcohol.

"While green tea could have health benefits at low doses, our study and other have shown that at high doses, it may have adverse effects," Jafari said, according to the Indian Express. "Further work is needed to make any definite recommendations, but we suggest that green tea should be consumed in moderation."

You probably don't have to give it up completely. Even the study's authors acknowledge that green tea is good for you when consumed in reasonable doses, and it does have demonstrated health benefits.

Research has shown that green tea promotes longevity and fights health problems such as cancer, heart disease and Parkinson's disease. It contains polyphenols and a flavonoid called epigallocatechin gallate, both of which have antioxidant properties.

"There is a large volume of research suggesting that green tea promotes cellular DNA and membrane structural integrity because of the antioxidant activity, which protects cells from oxidative damage," Marci Clow, a registered dietician nutritionist at Rainbow Light, explained to Mic via email.

Green tea also contains an amino acid called L-theanine, which Clow said "has been studied and used traditionally for its immune-boosting benefits, role in metabolism and relaxing and anti-anxiety effects."

As for the aforementioned study, Clow has doubts that green tea will bring about our demise any time soon.

"Although fruit flies apparently share 75% of the same genes that cause disease in humans, I find it difficult to extrapolate data and make a case for effect on human health when the subject group was fruit flies," she said.

Additionally, 10 milligrams of green tea — the amount to which the fruit flies in the study were exposed — "is a massive amount for a species of that size, and for a human to consume the equivalent amount to have any such effect would be pretty unlikely," she continued.

We still need more research to know exactly how green tea impacts human health, according to Clow. "Meanwhile," she said, "I recommend drinking a cup daily for its antioxidant benefits."