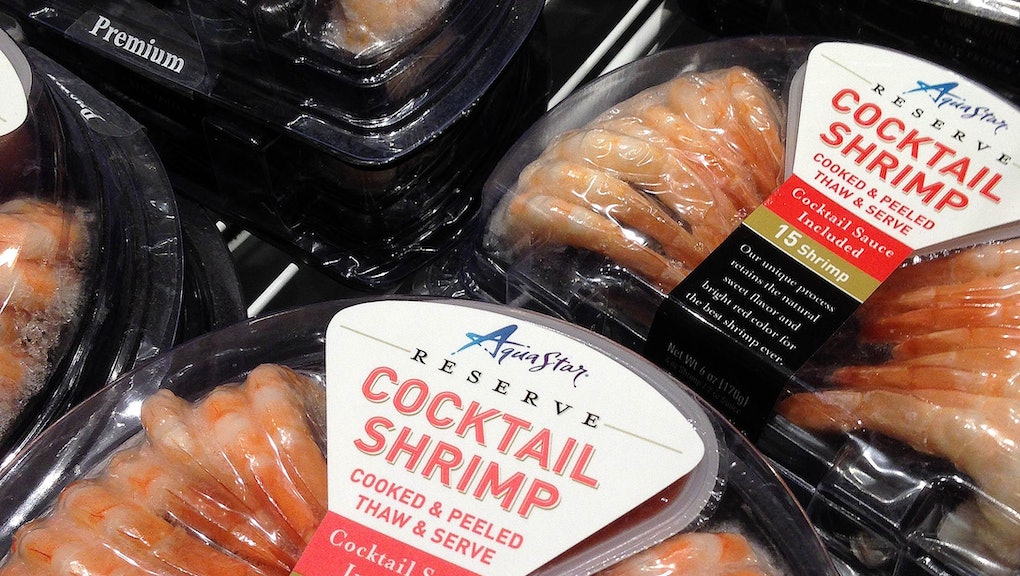 Shrimp prepared by slaves — including small children — have made their way to major supermarkets and restaurant chains in the United States, an Associated Press investigation published on Monday found.

AP followed the shrimp from the Thai port town of Samut Sakhon to companies in every state in the U.S. While import/export records in Europe and Asia are confidential, Thai shrimp companies told reporters they ship the product to both continents. Many of the forced laborers in the factory were Burmese migrants, some of whom arrived in search of better job opportunities. Many of them, too, were children.

"Children worked alongside [the other laborers], including a girl so tiny she had to stand on a stool to reach the peeling table," the AP wrote.

Workers recounted the slavish conditions under which they were held, with threats of beatings or death if they resisted; one source spoke of 16-hour days that started at 3 a.m. Many told of failed escape attempts.

While the Thai military has conducted raids on some shrimp shacks in Samut Sakhon, corruption sustains the practices of human trafficking and indentured labor throughout Thailand.

It's part of a systematic, widespread problem. This is not the first time slave labor has been uncovered in the seafood industry, nor is it the first time Wal-Mart has been implicated in sourcing from companies linked to human trafficking.

The story appeared in the 2014 compilation, Global Muckraking: 100 Years of Investigative Journalism from Around the World. In an intro to the piece, the writers explain, "They [trafficked migrants] hoped that working in a first-world country would provide a better future for their families ... Instead their rights were stripped and they were forced to live and work in floating sweatshops. They were deceived, coerced, verbally demeaned, physically and sexually abused and forced to work up to 30-hour continuous shifts under the threat of violence and financial penalty. Many were raped repeatedly."

Skinner's article ultimately spurred investigations into companies like Wal-Mart and Safeway, which resulted in at least a few reforms to the companies' supply chains, according to Global Muckraking.

Yet the problem persists.

The butterfly effect: The damage of human trafficking and slave labor isn't just restricted to those enduring the captivity — it has very real implications for poverty alleviation elsewhere. Many of the migrants who end up as forced laborers left their countries to secure real jobs, often to send remittances back home.

"The main channel through which the immigrant-sending country is affected is remittances," Ha-Joon Chang writes in his book Economics: The User's Guide. "Remittances have complex impacts on the receiving country."

"A high proportion (60%-80%) of remittances is used for daily household expenses," he notes. "This certainly improves the material living standards of the recipients."

The benefits of remittances relieve household financial strains in a way that is often beneficial to children — one of the most vulnerable demographics.

"Having higher incomes, the members of recipient families do not have to work as much as before," Chang explains. "This often means reduction in child labor. It also reduces infant mortality, as mothers with young children are given priority by the rest of the family to reduce outside work."

The problem, therefore, of slave labor in the shrimp industry is a vast one, extending far beyond the few shacks housing indentured migrants in this latest AP investigation. It necessitates a multifaceted approach, particularly given its role in reinforcing the cycle of poverty elsewhere.

Lastly, and perhaps most urgently, it introduces the larger question of whether or not our current standard of living is compatible with a world free of slavery.

We know we play an important role in setting and ensuring compliance with seafood industry standards, and we're committed to doing our part to make sure the seafood we buy and serve is sourced in a way that is ethical, responsible and sustainable. We take allegations of human rights and labor abuses in our supply chain very seriously. We have investigated the claims in the Associated Press story, and we are confident based on our findings and assurances from Thai Union that our seafood supply was not associated with the abusive pre-processing facilities.

The Red Lobster Code of Conduct clearly states our position on the importance of upholding human rights, social welfare and fair labor practices and our commitment to taking swift and appropriate action if this code is violated. We do not tolerate any supplier or business partner who violates the law, compromises our standards or participates in social welfare abuses.

We are working very closely with our suppliers and industry partners to take actions that will reduce and eliminate the human rights and labor abuses that have historically occurred in the seafood industry.