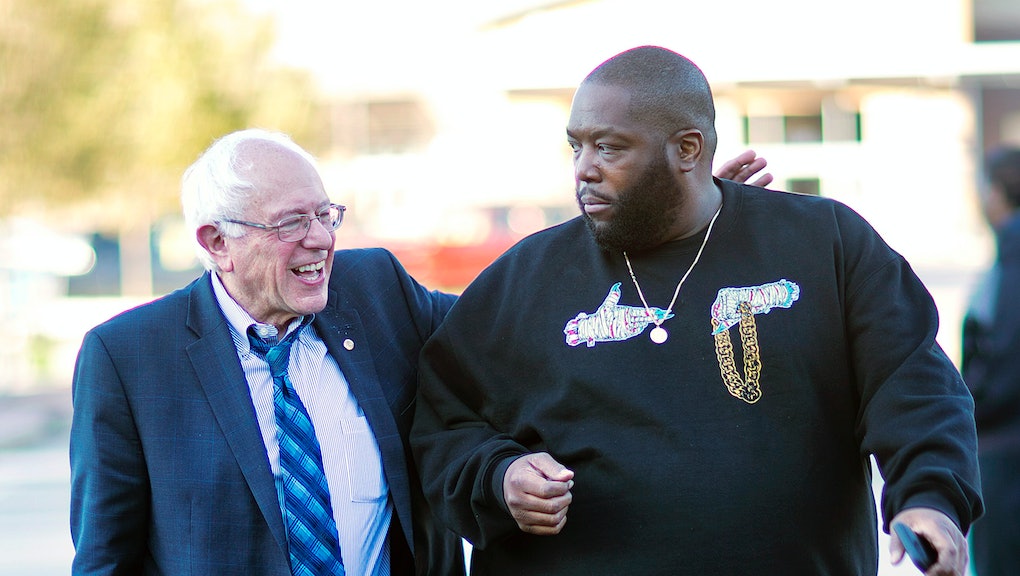 Rapper Killer Mike gave Democratic presidential hopeful Bernie Sanders a fiery introduction at a campaign fundraiser in Atlanta this past November. On that same day, the two also sat down for a more intimate talk in an Atlanta barbershop — a place close to Killer Mike's heart. That interview finally dropped Tuesday.

Killer Mike and Sanders' conversation is divided into six shorter clips, subtitled with headers like "Democrats Win When People Vote" and "This Country Was Started as an Act of Political Protest." Killer Mike shared seven choice moments on Instagram to hype up the interview, in which Sanders addressed a variety of topics from poverty to his purported "socialist" tendencies.

"I didn't get into politics to figure out how I could become president or a senator," Sanders says in Mike's first Instagram clip. "I got into politics because I gave a damn, because I do think it's an outrage that we have people sleeping out on the streets in this country."

Sanders also brought up his frustrations with our country's drug laws, which classify both marijuana and heroin as Schedule I drugs with no "accepted medical use."

Mike agreed. "I'm a marijuana smoker, and that is absolute bullshit," he says in the clip.

The two also talked about Hillary Clinton, the possibility of establishing an aristocracy of high-powered political families and current Republican frontrunner Donald Trump.

In the fifth video, Sanders explains how he believes Trump got his power. "People are angry and they're frustrated," Sanders says. "So somebody like Trump comes along and he says 'You're angry and you're frustrated? It's that black guy there, that's the guy. [Those Mexican immigrants] they're criminals and they're rapists, we gotta keep 'em out.' ... You play on people's fears and anxieties — this is the oldest story in the book."

Watch all the videos below.