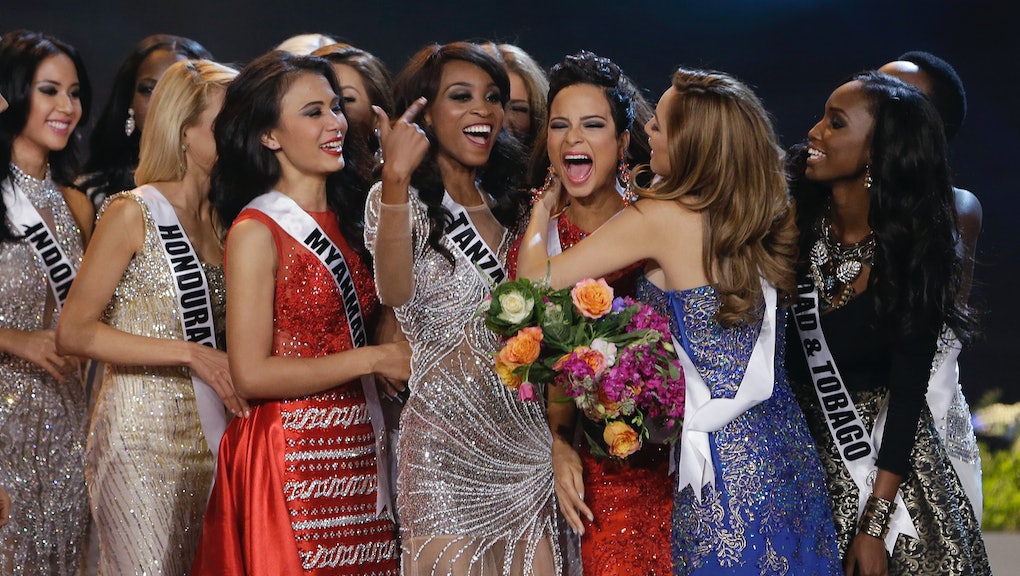 Miss Universe 2015: Start Time, Channel and How to Vote for Your Favorite Contestant

A new Miss Universe will be crowned Sunday at Planet Hollywood Las Vegas on Sunday, and this year, our opinions count: the now-Trumpless pageant has introduced real-time voting for the 64th annual competition, inviting audience members worldwide to weigh in on their mobile devices from 7 p.m. to 10 p.m. Eastern during the broadcast on Fox. Viewers will score contestants in the swimsuit, evening gown, final question and final look categories; the results will be tallied and factored with the judges' scores in the first semi-democratic Miss Universe election. Fans can also submit suggestions for the final question on Facebook.

"To provide the tools which help women to be their personal best" is the Miss Universe mission. "Self-confidence is the key. Every woman should have the confidence to stand up in any situation and declare, 'I am secure and that's what makes me beautiful!'"

Seal, Charlie Puth, Roselyn Sanchez and the Band Perry will all perform. Eighty contestants from around the world will vie for the Miss Universe title.

More than just a pretty face: Miss Universe grew out of a 1952 "bathing beauty" pageant in Long Beach, California, according to the website. According to the press release that announced the 2015 pageant, Miss Universe "is one of the most-watched events in the world, with distribution in approximately 190 countries and territories," with women from over 80 countries competing for the crown — and the winner going on to "champion" the Miss Universe cause: HIV prevention, awareness and treatment. The Miss Universe Organization (MUO) partners with a variety of HIV/AIDS-oriented charities, Miss Universe herself embarking on a global tour to promote the cause. MUO also partners with Same Sky — "a trade-not-aid initiative which utilizes jewelry to effect change in Rwanda" — and has established the Miss Universe Cordaid Fund to provide aid to hurricane victims in the Philippines.

Tickets for pageant events are available here. The event will be also be livestreamed on MissUniverse.com.