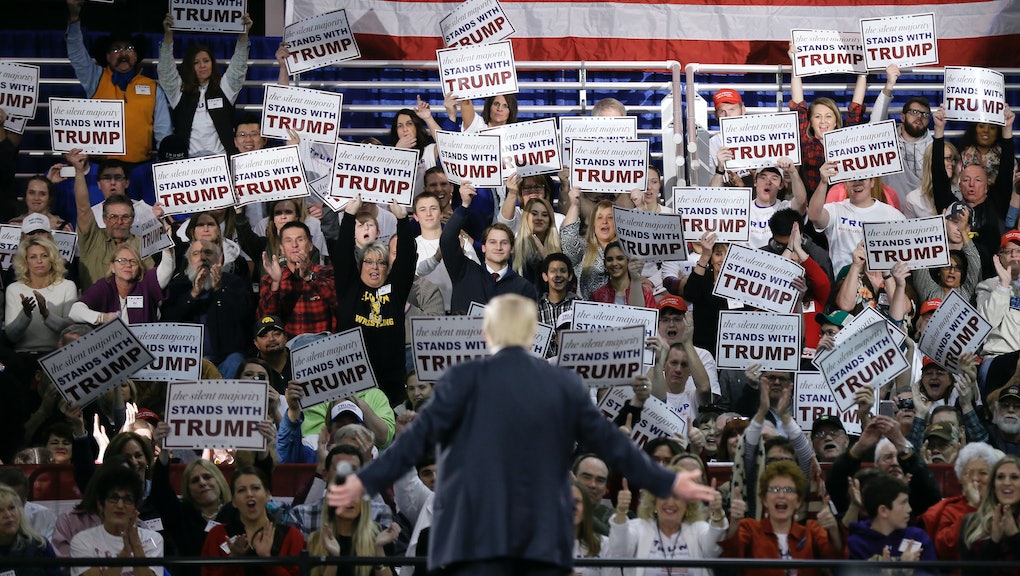 People looking to condemn Donald Trump's presidential campaign are quick to point to the frontrunner's support among prominent white supremacists and mobs eager for a fight. But defenders of the real estate magnate argue that those supporters are fringe followers, out of sync with the thrust of Trump's ideology.

A new poll, however, illustrates at least one shockingly backward view that's pervasive among a key contingent of his fans.

According to a Public Policy Polling survey of usual Republican primary voters in Iowa, 48% of Trump voters say they support the use of Japanese internment during World War II, while only 21% oppose it. That's a departure from Republicans overall in the state, among whom 29% support it and 39% are opposed. The poll found that supporters of Sen. Ted Cruz (Texas), Sen. Marco Rubio (Fla.) and Ben Carson all opposed the policy in greater numbers than supported it — in the latter case, by a margin of 4 to 1.

The internment of Japanese-Americans isn't typically a hotly debated issue. Across the political spectrum, the forced removal and incarceration of over 100,000 people of Japanese descent in the wake of Pearl Harbor is widely considered to be a stain on American conduct during World War II.

After the last camp was closed in 1946, the mass relocation grew to become a symbol of the perils of restricting civil liberties during times of war. Between 1982 and 1983, a federal committee issued the report Personal Justice Denied, which found that the the policy was not about security but rather "race prejudice, war hysteria and a failure of political leadership." The committee went on to describe the event as a terrible misdeed:

Widespread ignorance of Japanese-Americans contributed to a policy conceived in haste and executed in an atmosphere of fear and anger at Japan. A grave injustice was done to American citizens and resident aliens of Japanese ancestry who, without individual review or any probative evidence against them, were excluded, removed and detained by the United States during World War II.

In 1988, President Ronald Reagan signed legislation that formally apologized for the act and granted reparations to its victims, describing it as a "mistake" based "solely on race."

What's behind it: It's unlikely that Trump voters are more likely than most Republicans to have a particular dislike for Japanese people. There's a more plausible explanation for their view on internment: self-justification.

The question was posed to respondents in the aftermath of Trump's call for a ban on Muslim immigration, a position which he justified by literally invoking Japanese internment camps, albeit muddily. Given Trump supporters' widespread embrace of the Muslim immigration ban proposal, the question about Japanese internment wasn't a random bit of historical trivia. It was an overtly politicized question that forced Iowa Republicans to reckon with their own political consistency.

In other words, if Trump supporters in Iowa are in favor of his clampdown on Muslims, they're more likely to say they support similar policies from history that resemble the one making headlines.

That's not meant to trivialize the finding, but to place it in context. Regardless of the nuances of the situation, it is becoming crystal clear that a significant share of Trump's following is distinctly comfortable with deviating from contemporary norms in American politics. But that deviation isn't at odds with the nation's core values, as critics of Trump are fond of claiming. It's more of a return to old values.